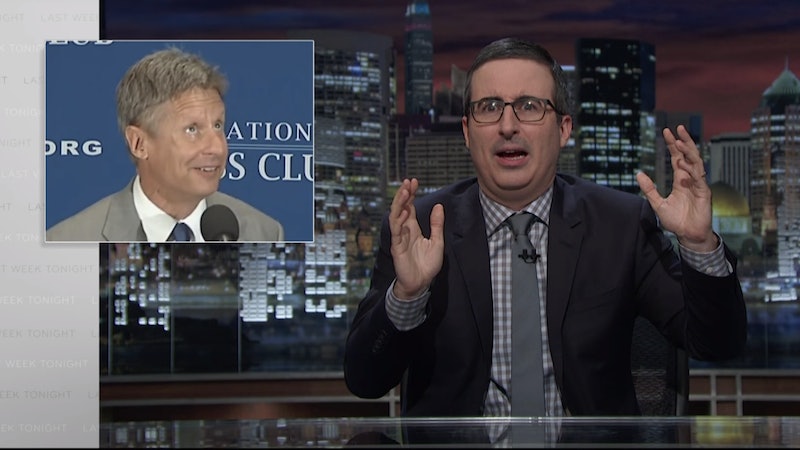 John Oliver showed no mercy to this election's third-party candidates, Jill Stein and Gary Johnson, on Sunday night's episode of Last Week Tonight. With Hillary Clinton and Donald Trump being the two most unpopular presidential hopefuls in over 30 years, Stein and Johnson have become last resort options for Americans desperate to escape the Democratic and Republican nominees. But as John Oliver explained last night, there's a pretty good chance neither of these alternatives would be taken seriously if they received even a fraction of the scrutiny the media and the public gives to the two names at the top of the ballot.

Libertarian nominee Johnson, who was governor of New Mexico from 1995 until 2003, currently has a national polling average four points higher than Green Party candidate Stein – 6.1 percent versus 2.1 percent. Oliver remarks on how incredible it is that Johnson's poll number managed to reach even that height "given that his campaign has been largely notable for not knowing what Aleppo is, not being able to name a world leader he admires, and whatever it is that he is doing here." A clip then plays of Gary Johnson talking to an interviewer with his tongue like this:

Also on the list of eyebrow-raising Johnson moments that haven't registered on national radar is the time he described reaching the summit of Mount Everest as follows: "People ask me, 'Gosh, what was it like to conquer Mount Everest?' Well, I did not conquer Mount Everest. She lifted her skirt and I got in there and got a peek and it was really cool."

As the segment goes on, Gary Johnson starts to seem like the kind of guy who could give Donald Trump a run for his money when it comes to weird moments on the campaign trail.

Another way he's unfortunately similar to Trump? Not knowing how the basics of government work and barely making an attempt to hide it during interviews. Some of the instances Oliver shows the audience to illustrate this point include the time Gary Johnson said he would eliminate the Department of Education, Department of Commerce, and Department of Housing and Urban Development, then couldn't name any of the "useful" functions these departments currently perform that the federal government would continue to provide. "You're asking three departments and I'm giving them to you. Let's just take the assumption that they should be eliminated."

During an interview with CNN when he was pressed on the harm his "magic wand" plan to get rid of income tax, corporate tax, abolishing the IRS and replacing them with one consumption tax, he replied with, "You're getting a little too into the weeds here." As Oliver then shouts, "What do you mean too in the weeds? The only point of discussing tax policy is to get into the weeds!"

After almost 20 minutes of exposing just a few of the issues with both of this election's third party candidates, Oliver ends the segment by dispelling the myth that we have a candidate with a perfect record who's superior to our other options. "As uncomfortable as this is, everyone has to own the flaws of whoever you vote for," he says.

Watch the full segment yourself below.