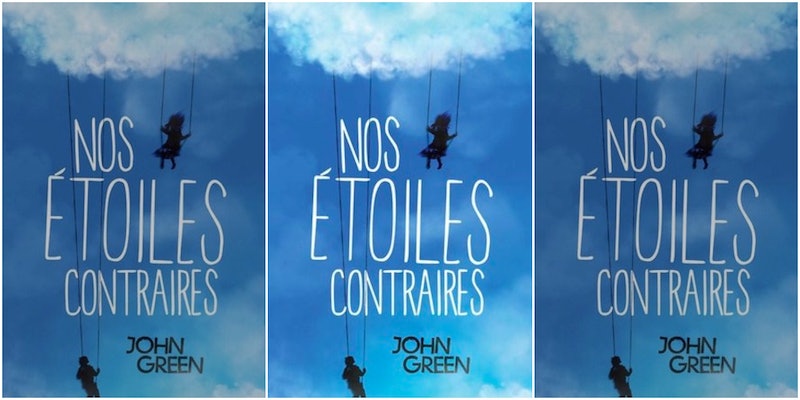 We're not supposed to judge book covers... but we're also not supposed to gossip or eat Nutella straight out of the jar. Things happen. We very occasionally judge books by their covers. But it's not necessarily a bad thing: there are some books out there with absolutely gorgeous covers. And some of the most beautiful covers in the world aren't even from the American editions, so here are a few foreign book covers that are even better than the U.S. versions.

Now I know it's hard for us to admit that we're not always number one, America. Even during an election year, when everything is a little bit going up in flames, we want to secretly believe that we still have something going for us. Surely our book covers are the best, at the very least?

Alas, no. I'm sorry, America. As beautiful as our book covers are, some other countries are cranking out book covers even more eye-catching, affecting, and all-around gorgeous. I'm not trying to start any international controversy over who has the best Harry Potter covers here. I'm just calling it as I see it. So let's all strive to be global citizens, and enjoy these great book covers from countries that are not America:

1. Poland: The Ocean at the End of the Lane by Neil Gaiman

Don't get me wrong, I love the U.S. version of this cover, what with that girl hanging out underwater. But there's something so dreamlike about the Polish edition. It really captures the adorable-fairy-tale-meets-acid-fueled-nightmare sensation of reading a Neil Gaiman book.

2. The U.K.: You Only Live Twice by Ian Fleming

James Bond is sexist. Let's all just accept that right off the bat, because then this beautiful, objectifying British cover for You Only Live Twice makes perfect sense. At any rate, it's way better than whatever this U.S. version of the book thinks it's doing.

3. China: Harry Potter and the Sorcerer's Stone by J.K. Rowling

OK, look, I'm not trying to start anything here. I'm just saying that the Chinese covers of the Harry Potter books are gorgeous. I'm not saying that the U.S. covers aren't perfectly charming... but I mean, just look at that cover.

4. France: The Fault in Our Stars by John Green

If you like the blobby cloud American cover design of this book, that's fine. I won't take that away from you. But the French edition is just so simple and sweet and sad and striking, in a way that the blobby clouds maybe aren't.

5. Israel: After Dark by Haruki Murakami

There's something about this cover that make me want to run in the opposite direction, but in a good way. Murakami has some absolutely beautiful U.S. covers, but for the cover of After Dark... sorry, America, I have to go with Israel's giant scary floating rock.

6. Iran: The Catcher in the Rye by J.D. Salinger

The good old fashioned weird horse cover of The Catcher in the Rye is great and all, but this Farsi language edition just captures the book with such elegant simplicity. Holden wears a silly hat, and he's a mess. Beautiful.

7. Italy: On the Road by Jack Kerouac

You'd think that the U.S. would have a better cover for a book about a road trip across the U.S... but most of the U.S. covers of On the Road are pretty meh. This Italian edition is just rocking that typography so well, on top of a photo that pretty much encapsulates the whole book.

Ewww. There's something so visceral about this Brazilian cover of Frankenstein (although, it's arguably not as gross as this Icelandic cover). But it's exactly what you want in a Frankenstein cover, without playing into the neck-bolt movie stereotypes.