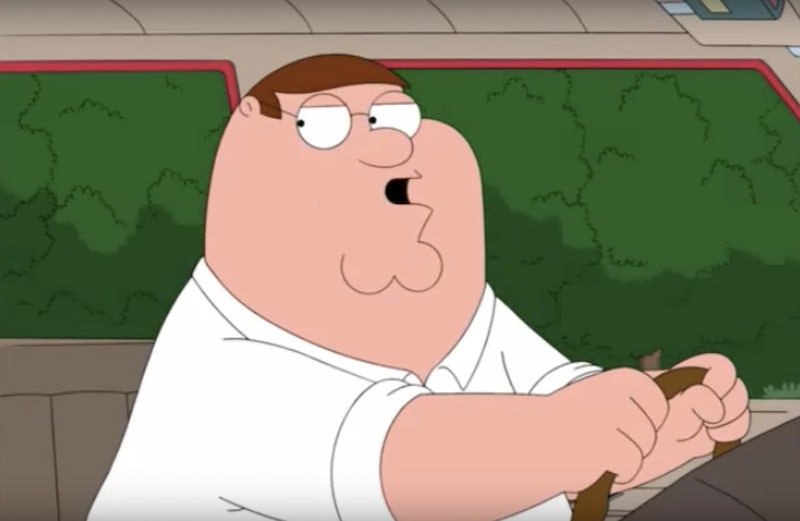 Ever since the Access Hollywood tapes of that fateful 2005 bus conversation between Donald Trump and Billy Bush leaked, reactions have ranged. Some believe Trump's comments were vile and disgusting and that he should drop out of the race, others think that the words were just boys being boys, and some admit the conversation was horrible, but that he should continue to the end of the election. The tape has been satirized by some like Saturday Night Live, mocked by various late-night show hosts, and on Sunday's episode of Family Guy, Peter Griffin visited Trump on the bus. Despite the amount of airtime the incident has already gotten, the spoof doesn't feel overplayed, because it's sharp commentary is on-point.

In the clip, Peter appears in the Access Hollywood bus, where he encounters Trump. The scene features the actual audio and video from the original tape, and switches out Bush for Peter's reactions to Trump's conversation. As it begins, Peter asks him if he wants to have some "locker room talk," which is how Trump dismissed the entire incident at the second presidential debate. Trump starts talking about how he "moved on" a woman, and Peter interjects to say that's not locker room talk explaining, "I meant like 'good play,' 'good pass,' like that kind of thing." It's what most people mean when they say "locker room talk," though, not for Trump.

After Trump further explains that he tried to have sex with the woman and that she was married, Peter responds by saying "Aw, you're awesome! Hey you ever thought about bein' President?" He then goes on to explain his idea for Twitter (since the social media company hadn't been invented in 2005, when the bus conversation took place) "where crazy people can bash ladies and minorities at 3 a.m." a clear dig at Trump's Twitter usage as of late.

Peter also throws a jab at Trump's choice of Tic Tacs as breath mints, and is alarmed when Trump says the now-infamous "grab them by the pussy" line. Overall, the scene is a good commentary on the incident and takes a clear stance on Trump's comments while using the biting tone of the show to make their opinion of Trump clear. Regardless of the fact that the bus conversation has been a talking point for commenters, voters, and newscasters for more than a week, Family Guy's take seems new as it puts a character into the situation and allows him to react.

While Trump has received blowback from some but continues his run for president, Bush has been suspended from his job at The Today Show, but is reportedly likely to get a settlement from NBC. Trump managed to get through the last debate following the tape's release, but I have a feeling it wasn't the last time we will hear about it during a presidential debate, with the last one coming up on Wednesday.