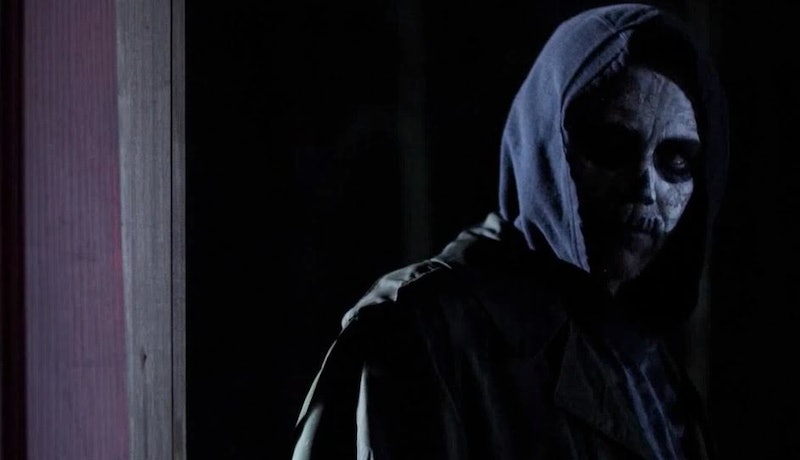 For those who like to be spooked, October is the perfect month. The air is just beginning to get chilly, storefronts have window displays painted with ghosts and ghouls, and there is every excuse in the world to have a Halloween horror movie marathon. Horror films are released all year round, of course, yet there is a certain nostalgic appreciation for them during the month of October. From classics like The Shining to lighter fare like Hocus Pocus, to critically-acclaimed new releases like The Witch and Don't Breathe, October is the perfect time to huddle up by the fire (or — for those of us without the luxury of a fireplace — in a Snuggie), grab some tasty, themed snacks, and settle in for hours of creepy cinematic gore.

And according to horror writer/director Tyler Christensen, who will be releasing House of Purgatory — about an urban legend coming to life in the form of a haunted, secret-filled house that ensnares several teens — there are certain essentials to every horror movie marathon. (Yes, more than several tubs of ice cream). So, here are the most essential parts of any good horror movie marathon, according to the House of Purgatory creator.

This should go without saying, but solid snacks — you know, bite-sized morsels you can eat mass quantities of — are a must of any movie marathon, but especially those of the horror variety. Christensen agrees, saying his favorite snack is one of the most classic there is: “Popcorn is the ultimate, essential horror movie watching snack," he says. "It’s great to toss in the air when you get scared. It can be used to throw at friends who are talking. And let’s not forget its role in horror classic Scream 2... moments before Jada Pinkett-Smith meets Ghostface as well as her untimely demise. A medium popcorn, no butter, and a small Diet Pepsi was her last, yet delicious meal.”

If I'm going to sit through hours and hours of movies I've probably already seen before, having some sort of fermented libation at arms length is preferred. And if I'm going to endure multiple hours of horror movies, then alcohol is a must. It's really the only way I'll survive watching that creepy child pop out of the TV in The Ring for the nth time.

Christensen agrees, but for different reasons: “Generally I'm just a beer guy. Maybe it's because I grew up in Wisconsin. And pumpkin beer is in my top five favorite things of all time. Plus who doesn't love P.J. Soles’ Linda telling Bob to get her another beer in Halloween? But beer and marathons pose a couple of potential problems," he admits. "Firstly, you tend to drink more liquid when drinking beer, which means more bathroom breaks. Secondly, beer has a tendency to fill you up and push you towards the arch nemesis of marathon viewing parties: getting tired."

Luckily, Christensen offers an alternative: "I would probably get that caffeinated Diet Coke that goes so well with popcorn and spike it with a liquor of choice. I'll take Jack (the Ripper) Daniels. Keep in mind, however, drinking in a horror movie usually doesn’t end well. Don’t forget Randy’s rules in Scream.”

While you never need an excuse to throw on some sweats, an oversized T-shirt, and fuzzy socks, movie marathons provide a perfect reason to get ultra cozy, and Christensen agrees: “Movie marathons are basically the reason sweatpants exist," Christensen says. "Plus, in the event that you suddenly find yourself needing to run from a mad man or monster, you need to be in something lightweight and pliable — something in which you can jump fences, outrun your friends, and kick some ass if need be.”

There's nothing I hate more than watching movies with people who would rather be doing something else. Christensen hit the nail on the head, saying: “I hate people who talk or play with their phones during movies in the theater. Hate. I don't know what has happened, but in the past two or three years, I feel like I haven't once left a theater not wanting to go all Jason on somebody. Watching movies at home in a marathon setting, however, can be a different beast," he explains.

"If you're doing a Nightmare on Elm Street or Friday the 13th marathon, you've probably seen these movies dozens of times, and the communal appreciation of them leads to talking and conversations about the best and worst kills, and the cheesy acting. If your marathon is more of a ‘Let’s check out a bunch of indie horror films we haven't heard of,’ though, then the no talking rule has to be implemented. You need to be clear which type of marathon this is, and be judicious in your decision when making your guest list.”

My biggest pet peeve is watching horror movies with people who hate horror. There's always the one guy or gal sitting in the corner, head nestled between his hands, asking the group every five seconds: "Can I look yet?" Don't be that person.

“If you're going to dedicate an entire day to the art of horror movie marathoning, then do it right. It needs to be dark. The only source of light should come from a fire in the fireplace, candles, Jack-o-lanterns, or that cool string of ghost lights you got at Target and have strung over the door," he says.

Once you have the lighting right, then get the temperature right.

"It needs to be cold. Open a window and let that cold fall breeze in — let the smell of fall completely encompass you," he offers. "Or if you live in a warmer climate, turn that thermostat down a degree or two.”

6. Put The Phone Down

Cell phones and movies don't mix, ever. Even if you're not in a movie theater, tapping on a bright screen in a dimly lit room while others are trying to enjoy what's on the big screen is disrespectful. Still, Christensen admits: “We are all guilty of it. Some of us more than others (you know who you are). We are so attached to those ridiculous little devices that we can't relax without feeling their warm electronic embrace upon our palms," he says.

"Half way through a movie, you'll get a text, then that leads you to a quick check of your email, which pours right into a peek at Twitter, a tap through Snapchat, a scroll through Instagram, and gander at Facebook, by which time you've missed 10 minutes of the movie and more interested in the ridiculous political posts of that girl you went to highschool with who loves hanging all her drama-filled laundry out for the social media world to see. Cut the cord — for all of our sakes.”

Some of the best horror movies out today are made independently. A big budget doesn't always equal a quality film, and this is especially true in the horror space. Christensen urges: “If you're going to watch five movies that you've already seen, then do yourself a favor and throw one in there that you haven't. There are so many amazing indie horror movies available across all platforms, that you owe it to yourself to stick at least one into your marathon that you haven't heard of or looks a little different," Christensen suggests.

"Sure, there are countless movies you will not like, but there are also little gems that you may have no idea even exist. You may just find that low budget diamond in the rough like House of Purgatory. Because let’s be honest, do you really want to trudge through Revenge of Michael Meyers, to plod through The Curse of Michael Myers, just to torture yourself by attempting to watch the unwatchable Halloween: Resurrection?”

Alright, you heard it from a master of horror himself — so get thee into a pair of sweatpants, stat.