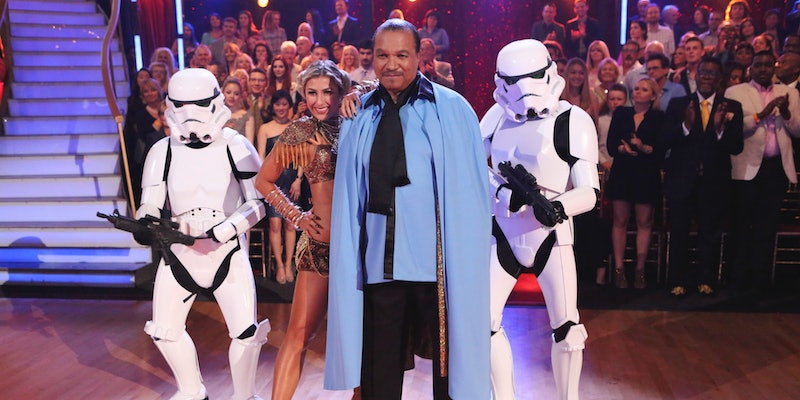 Before this first Dancing with the Stars live-blog I wrote tonight, I had never seen an episode of the show in my life. It wasn't that I'd avoided it, or considered myself above it -- I recap The Bachelor! I am above NOTHING -- just that it had managed to elude me for so many years. What little I knew about the show came from assumption (it's about dancing! There are celebrities or pseudo-celebrities involved!) or my mom, for whom this was always one of the "few shows she watched." I guess I also knew, or felt anyway, that people who watched weren't doing so as part of a guilty pleasure regimen. Sight unseen DWTS gave off a different vibe than Bachelor, or anything on Bravo. Dance is athletic; dance requires effort. Therefore this show can't be all trash.

And I very much learned tonight that it's not trash! Quite the contrary -- DWTS is a uniformly impressive showcase of physical talent and hard work. We're not watching to mock the contestants (See: Idol's opening rounds) or cringe at hormone-addled antics (see: every single goddamn second of Bachelor) but to celebrate athleticism and rhythm in a fun and constructive environment. It's hell to recap because there's barely anything to poke fun at. But it's so much better to watch because you don't have to feel like shit to do so. Is this what my mom knew so long ago? Is this what you've ALL known? Not that I would have gone out of my way to watch DWTS were it not for recapping responsibilities, but I wish someone had told me sooner!

One of the things that I LOVE, truly love about this show is the obvious and overt flirting between celebrity contestants and their new dance instructors. Let's be real for a second: this assortment of Russian, Australian, and American-by-birth-only professional dancers is across-the-board hot. From abs to hair to legs and back to abs again, these are finely-tuned physical specimens at the height of their sexual charisma. To not be taken in by that -- even if you're devout Christian woman Candace Cameron Bure -- is to deny the very effects of biology. To deny your HUMANITY. So it's perfectly life-affirming and beautiful to see these celebrities, man or woman, bat their eyes and lay on Archer-level innuendo whenever possible.

Case in point: Olympic Ice Dance gold medalist Meryl Davis, paired with DWTS' resident BAD BOY Maks Chmerkovskiy. Now Davis is of course an absurdly accomplished athlete who has climbed to the highest ranks of her sport. But, you know, she's also a 27-year-old whose ice dancing partner is going out with one of Canada's most beautiful figure skaters/people and hey, let's FLIRT A LITTLE with Maks. That's what he's there for! Watching Meryl and Maks' pre-taped rehearsal, wherein they practiced a series of lifts and tucks and assorted other raunchy moves and discussed how this was a safe space to "let go" was already priceless. Then, after they'd finished their routine, Meryl wasted no time in showing off -- and then patting -- Maks' butt to the judges. Powerful women patting butts, males on display, dynamite dancing...this one ten minute stretch may have made up for an entire season (read: an entire SERIES) of disingenuous Bachelor garbage. I feel reborn in the honest chemistry on stage at DWTS.