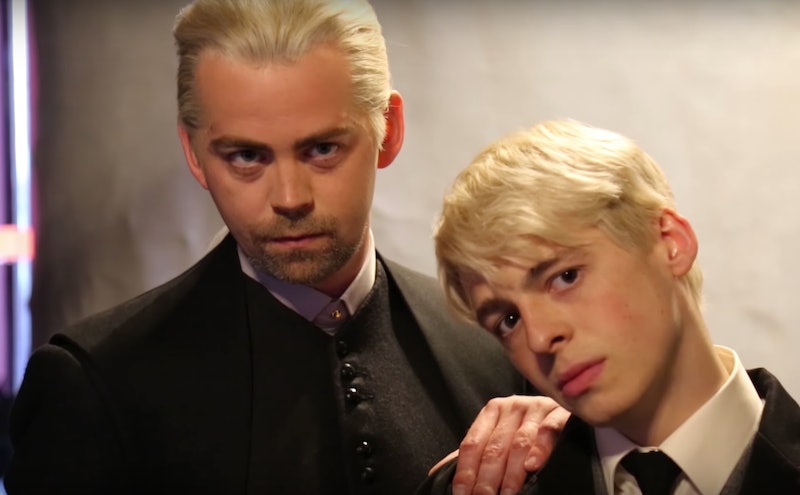 Okay, let's talk about Draco Malfoy for a second (I'm sure he'd love that). It's no secret Draco is a controversial character among the Harry Potter fandom. If you've read Cursed Child (and if not, you should), you might have been surprised to find what a good father Draco Malfoy was to his son Scorpius. It definitely wasn't expected of him (he was a Death Eater after all), but Cursed Child — whether you consider it canonical or not — sheds some new light on adult Draco and reveals more about his character than many readers might have thought possible for him.

As a reader who actually admires Draco as a well-rounded character, I will admit there are plenty of reasons to dislike him. He's an arrogant, entitled, spoiled brat who spent the majority of his time at Hogwarts as a bully to Harry and his friends (not to mention he uses the 'M' word pretty loosely). But, towards the end of the series, we start to see Draco question his allegiance, his morals, and essentially everything about himself.

For someone whose father practically sold his soul to the Dark Lord, Draco came around quite a lot compared to who he used to be, and he even started a family of his own. If you've been lucky enough to read Cursed Child, then you know exactly what I mean about Draco's love for his only son. Even if you still don't like him, this twisted epilogue gave Draco the redemption arc so many of us hoped for, if not in an unexpected way.

If you don't believe me, check out a few ways Cursed Child proves Draco was a better father than Lucius Malfoy ever was to him (spoilers ahead).

1. He Doesn't Pressure Scorpius to Be Someone He Isn't

“Never really fancied being a Ministry man. Even as a child. My dad, it’s all he ever wanted — me, no ... Mainly I wanted to be happy.”

I'd like to start by saying that it's easy to romanticize Draco Malfoy (because Tom Felton, come on), but even JK Rowling herself has stated on Pottermore that, as much as we'd like to believe it, Draco was not hiding a heart of gold beneath his layers of prejudice and entitlement. Still, during the events of the Battle of Hogwarts, Draco began to understand himself as more than just a Death Eater. He realized he didn't have a thirst for murder, and he didn't have it in him to carry out Lucius' wishes for him. That understanding carried with him into adulthood and parenthood. He doesn't care that Scorpius is geeky and awkward. He just wants Scorpius to be himself and to be happy.

2. He Doesn't Want Scorpius to See Him the Way He Saw Lucius

“I think you have to make a choice — at a certain point — of the man you want to be. And I tell you that at that time you need a parent or a friend. And if you’ve learned to hate your parent by then and you have no friends … then you’re all alone. And being alone — that’s so hard. I was alone. And it sent me to a truly dark place. For a long time."

Lucius (and Narcissa) conditioned Draco to believe he was better than everyone else because of his status as a wizard, his pure bloodline and his role in the Malfoy family. Draco has a lot of negative qualities, and many of them are the fault of his parents. He comes to realize this during Deathly Hallows, and he develops a resentment for Lucius that he's never known before as a result. As an adult, Draco realizes how lonely this resentment made him, and he does not wish for his son to feel that, too. He does his best to listen and be there for Scorpius, so as not to become like his own father.

3. He Cares About His Son's Happiness

“My son is in tears and I am his father and so I am here to ask why you would keep apart two good friends.”

Even if we can't have the Draco/Harry friendship we've always secretly dreamed of, at least Draco raised a son who could befriend a Potter. After losing his way and essentially abandoning everything he believed in as a child, Draco truly learned what it meant to be alone. Knowing how awful it was, Draco did his best to ensure that his son would never have to feel that way — even if it meant letting Scorpius be friends with the son of his childhood nemesis. The fact he's willing to overlook that to secure his son's happiness is something Lucius would definitely never do.

4. He Doesn't Let Scorpius Think Less of Himself

"We haven't become anything — we simply are as we are."

At one point in Cursed Child, Scorpius asks Draco how they have become such terrible people. Draco responds that they haven't become anything; they have simply always been this way. Not very comforting. But, Draco does follow up by commenting that Scorpius is a lot more like Astoria, his mother, than he realized. He explains Astoria was always able to help him see the word in a brighter light. Through this anecdote, he communicates to his son that — despite being a Malfoy — Scorpius is also filled with natural light and goodness.

5. He Raised Scorpius to Have Better Values Than He Did

"You know what I loved most about your mother? She could always help me find light in the darkness. She made the world — my world, anyway — less — what was the word you used — “murky.”

Cursed Child makes it clear that Draco still grieves the loss of his wife. Astoria taught Draco how to see the world in a more positive light and to make the world a better place. He uses Astoria's example to teach Scorpius to value people and be kind to them, regardless of their blood status. He teaches his son to be polite and generous, and he even learns a few things from Scorpius himself about what it means to really love someone and care for them — something that was not clearly present in the Malfoy household during Draco's childhood.

6. He Accepted the Past

“Do you know how lonely it is to be Draco Malfoy? I can never escape the rumors and the accusations and the suspicion."

As sad as it is to hear about his loneliness and inability to ever truly separate himself from what he did as a teenager, Draco's story in Cursed Child is redemptive. He learns from his mistakes and does what he can to stop Scorpius from being associated with them. Even though his past haunts him, he doesn't want that to affect his son and how people see him (with the whole Voldemort accusation). His life becomes less about protecting his own reputation and more about ensuring Scorpius is not judged for what he did in his past. Unlike Lucius, he just wants his son to feel loved and accepted.

7. He Helps Harry Save Albus

“Maybe the black cloud Bane saw was Albus’s loneliness. His pain. His hatred. Don’t lose the boy. You’ll regret it. And so will he. Because he needs you, and Scorpius, whether or not he now knows it."

One of the biggest signs of growth for Draco in Cursed Child is demonstrated through his forced friendship with Harry as they figured out the situation with their missing sons. Draco, who didn't have a great relationshp with his own father, tells Harry that he must make up with Albus. He has no real reason to help Harry, but he puts aside their past together to save his father-son relationship. The script manages to humanize Draco and present him as a grieving, overprotective father who actually has a lot in common with Harry in their middle-aged years.

8. He Sees Scorpius as More Than an Heir to the Malfoy Throne

“Our child, Scorpius, was born … it was the best day of both our lives.”

As much as he tries to help his son, protect him, and make him into a better person than he was raised to be, Draco also relies on Scorpius to protect him. He relies on his son for love and needs him as much as Scorpius needs him. The Cursed Child makes it clear that Scorpius is more than an heir to the Malfoy throne in Draco's eyes. He is a reminder of his wife, a reminder of who he could have been if his family wasn't so set in their pure-blood ways, and a source of incomparable love that Draco didn't know he so desperately needed until his son was born.

9. He's Willing to Step Out of His Comfort Zone for Scorpius

Okay, so maybe it doesn't seem like much for your dad to offer you a hug, but in the Malfoy family, affection is typically shown in unusual ways ("For Voldemort and valor"). At the end of the script, Draco notices that his son is more affectionate and loving than a typical Malfoy, prompting him to offer Scorpius a hug for what we can assume is the first time. The hug is awkward and strange for both of them, but it's a step in the right direction, something that makes them both smile.

There's no denying Draco is a complex character in his own right. But, why would Rowling make Harry and Ron save Draco's life in The Deathly Hallows if she didn't think he could grow as a character? The Cursed Child, while strange and surprising in many ways, showed that magic (love) really can be found in even the darkest of places.

More like this
Neil Patrick Harris Will Play 'Doctor Who's “Greatest Enemy” Yet
By El Hunt
16 Novels That Paint A Realistic Portrait Of Abortion
By K.W. Colyard
'The Summer I Turned Pretty' Book Ending Is An Emotional Rollercoaster
By K.W. Colyard
Regé-Jean Page Spoke Out On His Rumoured 'Bridgerton' Return
By El Hunt and Maxine Harrison
Get Even More From Bustle — Sign Up For The Newsletter