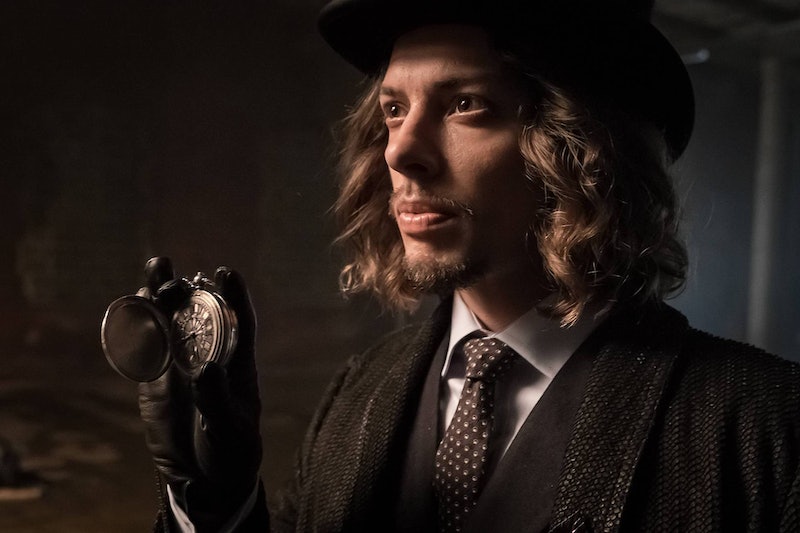 When a villain leaves on Gotham, there's no guarantee they won't come back again, especially if they aren't dead (or if they are dead and they're in Hugo Strange's horrible clutches). So when Jervis Tetch reappeared vowing his revenge it wasn't particularly surprising, but it was a little shocking to see how he was putting together a murderous tableu and an obsession with his sister's death. Already, it was clear that Jervis was a twisted and evil man, after he forced a couple to kill themselves so that he could have a nice place to stay while stalking his sister a few episodes ago. However, kidnapping an innocent woman and brutally slitting her throat after making her pretend to be both Alice his sister and Alice, the Alice in Wonderland character is a whole other level.

The Alice in Wonderland connection is taken directly from Batman comics, where The Mad Hatter, also named Jervis Tetch, is obsessed with the imagery from the book. This is Gotham's take on the character, and it works pretty well — so far, Jervis isn't quite as scary as the series' most unsettling villain (that's got to be Jerome, right?), but he's certainly going to be a huge threat to Jim Gordon. Jervis was able to hypnotize Jim into wanting to kill himself, and so whatever this tea party invitation means, it can't be good.

Meanwhile, Captain Barnes is continuing to transform from the pathogens in Alice's blood. Every time he's alone with someone in a room, it seems dangerous, as if he could leap out and fly into a rage, killing them, at any time. And based on the story that Lee, now investigating the poison, told Barnes, it seems that it's only a matter of time before he's totally lost it and begins rampaging around the city. Hopefully, one of the crack scientists on the show — Lee? Lucius Fox? Ed Nygma? Hugo Strange? — is able to put together an antidote before it's too late and Captain Barnes is too far gone to be saved.