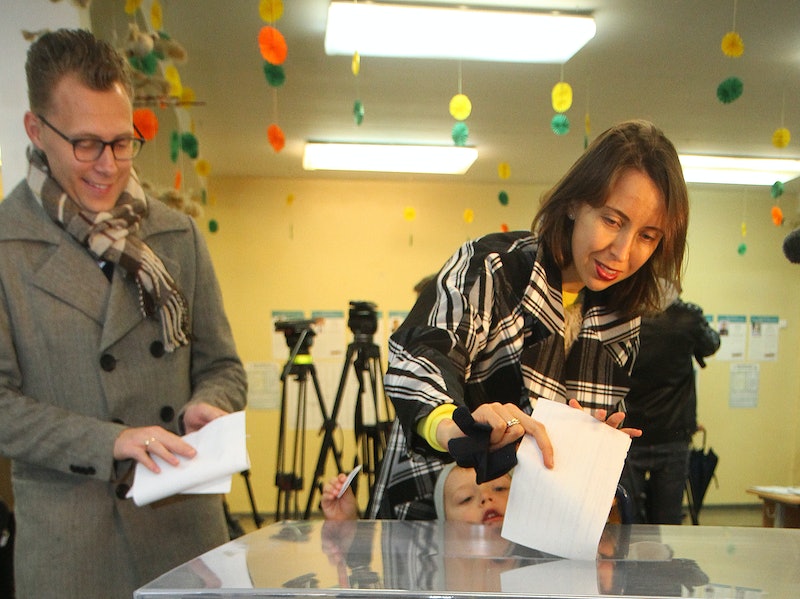 In 2016, dissatisfaction with both major-party presidential candidates is at a record high. This has driven some prospective voters to seek out an alternative in a third-party candidate — Libertarian Gary Johnson, the Green Party's Jill Stein, and Liberty Union candidate Gloria La Riva, to name a few. But there are, as ever, some who either can't get behind any of these options or have someone else particular in mind that they want to cast their vote for. Those who want to write in a candidate need to know their state's rules for doing so. The following information on state write-in rules will get you up to speed.

First, it's important to know whether your state even allows write-in votes. You're out of luck if you live in Nevada, New Mexico, South Dakota, Oklahoma, Louisiana, Mississippi, Arkansas, Hawaii, or South Carolina. Write-ins in these states will simply be discarded.

And then there are the free-for-all states where anyone can be written in: Vermont, New Hampshire, Rhode Island, New Jersey, Pennsylvania, Iowa, and Oregon. Write anyone down, and your vote for that person will be counted. However, that doesn't necessarily mean that a write-in candidate would be awarded electoral votes in the (highly unlikely) event that he or she won in one of these states.

Snopes conducted a fact check on the claim currently circulating social media that Sen. Bernie Sanders could win the presidency if he denied either Hillary Clinton or Donald Trump the required 270 electoral vote majority by picking up a handful of electoral votes in key states that allow write-ins. Officials from Iowa and Vermont told Snopes that he would not be allocated any electoral votes even if he won in those states. Generally, candidates or their parties choose a slate of electors to vote for them during the final Electoral College vote. Since Sanders isn't running, he has no electors. This creates a grey area in which states can decide whether or not to give those votes to a write-in candidate.

The majority of states — the remaining 34 — count write-in votes in certain situations. Individual states have different requirements, but they generally include filing an affidavit or other paperwork with the state to officially declare candidacy. Some states also require candidates to submit a slate of electors. For detailed information on your state, check out the National Association of Secretaries of State's compilation of state write-in rules.

In most states, there are options for you to vote for whomever you wish, whether it's someone already on the ballot or someone you're putting on it yourself. But in order for that vote to count, in most states, the candidate must actually be running. And even then, they might not stand to gain any electoral votes. Being familiar with your state's write-in rules allows you to know what will become of your vote.