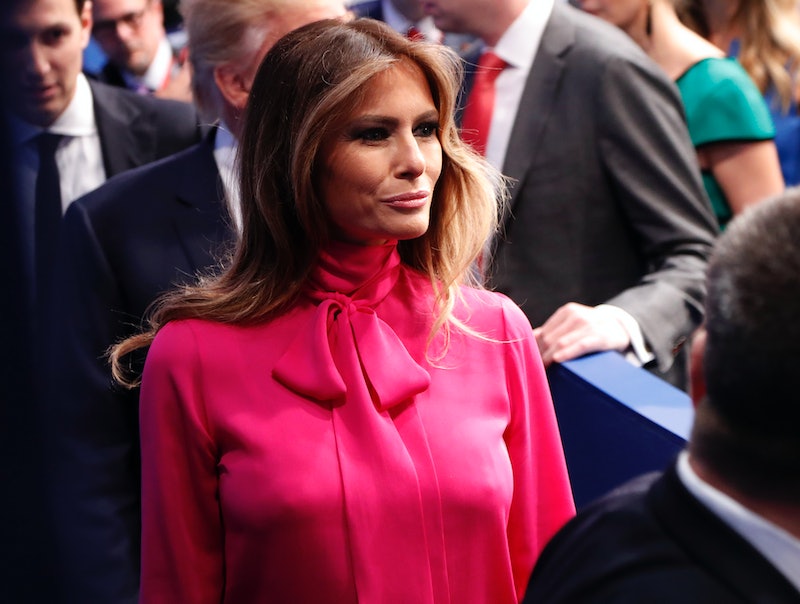 During an interview with CNN's Anderson Cooper, Melania Trump described her husband's comments in the now-infamous 2005 Access Hollywood hot mic tape — in which he said he likes to kiss women without their consent and "grab them by the pussy" — as "boy talk." While Melania said she was "surprised" because she had never heard the Republican presidential nominee talk that way, she appeared to offer a tacit defense. "I heard many different stuff — boys talk," she told Cooper in her first on-camera comments about the remarks. "The boys, the way they talk when they grow up and they want to sometimes show each other, 'Oh, this and that' and talking about the girls. But yes, I was surprised, of course."

It makes both political and personal sense that Melania would be standing by her husband's side and trying to contextualize his words. Moreover, to her credit, she issued a statement the day after the Washington Post publicized the tape, saying "The words my husband used are unacceptable and offensive to me." (Of course, her statement quickly pivoted to imploring voters to "accept his apology, as I have.")

There is something disappointing, though, not about Melania defending her husband, but that she has chosen to do so by claiming that his words are "boy talk." Boasting about grabbing women in sexual ways without their consent because "you're a star" isn't how boys talk. Or, at the very least, it's not how men talk — and let's remember Trump was not a boy, but a 59-year-old adult when he bragged to Billy Bush (then 34 years old) about his behavior. It sets a horribly low standard for boys to think such language is how they should talk, let alone acceptable or typical and casts them in an unfairly negative light. I would say such justification does more of a disservice to men, and that characterization sells them much shorter than they certainly deserve.

This point was highlighted in Michelle Obama's blistering denouncement of Trump's rhetoric (without actually naming Trump) last week in New Hampshire. The first lady posed an important question to the crowd and the country, highlighting that combatting such misogyny is not just about protecting girls but boys:

And how is this affecting men and boys in this country? Because I can tell you that the men in my life do not talk about women like this. And I know that my family is not unusual. And to dismiss this as everyday locker-room talk is an insult to decent men everywhere.

It would have been refreshing if Melania had not relied on a cliche and, frankly, inaccurate characterization of boys and the way they talk about the opposite sex. All around there are examples that decent boys and men do not consider the kind of language and sentiments Trump conveyed to be "boy talk." Consider the 42-year-old man on a New York City subway who, last week, risked his own safety when he stood up to a "preacher" who was shouting sexist and misogynistic remarks at passengers. He was slashed in the face for telling the harassing "preacher" to move to another car. That injured man is above "boy talk."

Perhaps, Melania Trump could take a cue from Michelle Obama and acknowledge that "Strong men — men who are truly role models — don't need to put down women to make themselves feel powerful."