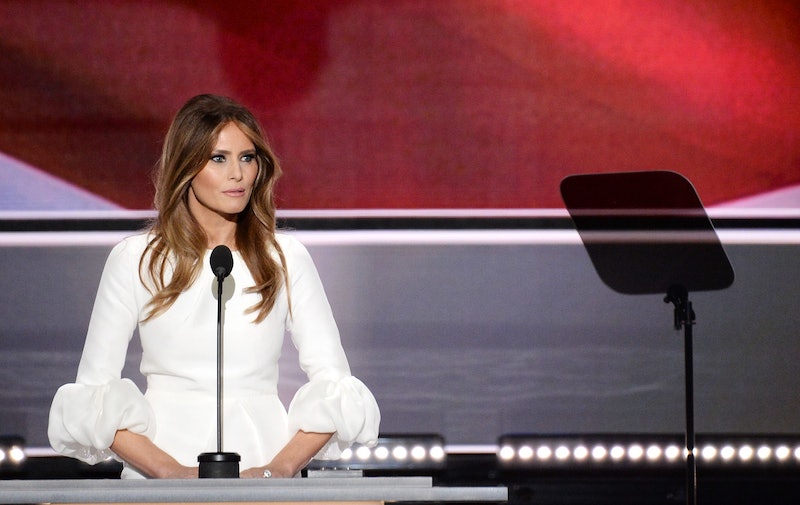 In the aftermath of leak of the Access Hollywood tape and Donald Trump receiving fallout from many for his comments on it, a lot of people have been defending him on camera. Whether it's his surrogates, employees, or his family, it's mostly been an attempt to downplay the horrible things he said and divert the topic. But of those who have stuck up for him in the last few weeks, the worse defense might just be his wife's. In an interview with CNN's Anderson Cooper, Melania Trump said that her husband was "egged on" in the bus, deflecting blame from him.

This is an irresponsible claim. Donald, unfortunately, was the one who said the things that came out on the tape. It's Donald who said, "I did try and fuck her," and, "You know, I'm automatically attracted to beautiful [women] — I just start kissing them. It's like a magnet. Just kiss. I don't even wait," and, "When you're a star, they just let you do it. You can do anything ... Grab them by the pussy." It's Donald who could have chosen to not say those words, or even stopped after his first comment, but didn't.

Melania told Cooper that they were "moving on" from the incident. It seems like Melania finally speaking up publicly about the tape is the campaign trying to give a final word on the subject. As a candidate's spouse who has been largely absent from the spotlight throughout her husband's campaign, save a few incidents, it's not surprising that it's taken this long for her to get involved, and Donald might hope that the weight of it will influence others to move on as well.

But even if Bush was egging Donald on and encouraging in the conversation to continue, that in no way makes it OK, or even less horrific. In Melania's interview, she says the two were engaged in boy talk, and "he was led on — like, egged on — from the host to say dirty and bad stuff." But if Bush was indeed egging Donald on to talk like that (which he really wasn't), that still doesn't mean Donald should have said it.

Melania's other mistaken view expressed during the interview came out when she said, "And as you can see from the tape, the cameras were not on — it was only a mic. And I wonder if they even knew that the mic was on." It does not even matter if they knew if their mics were on or not. Donald still said the things that he said, and the opinions about women he expressed are horrible, period. It doesn't matter if he said them in the privacy of his own home, with a mic, or on national television: What he said about being able to essentially sexually assault women is disgusting.

What's confusing is that in the same interview, she also said she told Donald his words were inappropriate and not acceptable. If that's the case, then why make excuses for him? Team Trump needs to stop deflecting from the incident, own up to it with no exceptions, and apologize that Americans had to hear such things from a presidential candidate.