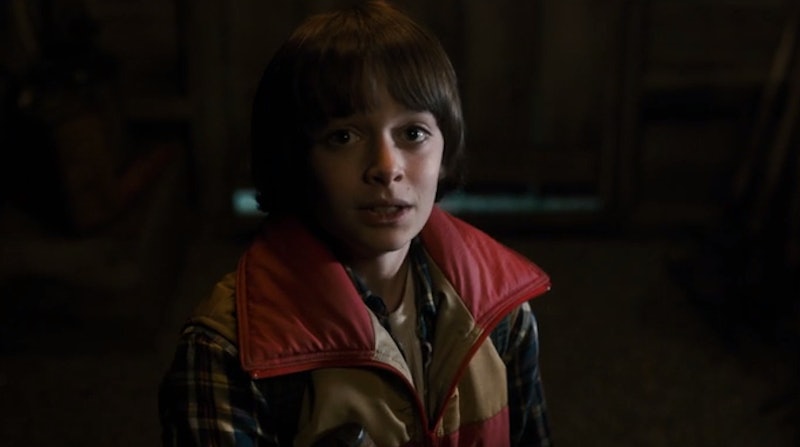 Netflix's original series, Stranger Things, has provoked mass discussion since it dropped in July of 2016. Fans have been singing the virtues of Barb, wondering what Eleven got up to (or what got up to Eleven), and even theorizing about Will Byers' sexuality. As for the last, the actor who plays Will, Noah Schnapp shared his two cents to say about the sexuality of his character. Some fans are guessing that it will come to light in later seasons that twelve-year-old Will identifies as homosexual, and they have been flocking to Twitter to discuss the character's sexuality with the always-listening ears of the internet.

There is even a theory from Redditor sik_t0xic13 that there is a gender duality shared between Eleven and Will, and that being in the Upside Down is actually synonymous with being in the closet. He/she (spoilers ahead!) refers to the final scene when Will hides that he keeps spewing gross Upside Down goo and describes the event as Will "coming to terms with suppressed gender identity." which the theorist points out, "is possibly a struggle many children in modern times and battle with, often resorting to suppressed feeling and concealed emotions."

And yet, Noah Schnapp doesn't think that Will's sexuality is really the important issue at hand. The young actor shared his opinion via his personal Instagram account on Sunday, October 16.

Schnapp compares the Duffer Brothers-created story with something an author, Gray Schmidt had to say when came into Schnapp's school for a talk. Schmidt pointed out that good stories leave audiences with questions and not answers. As Schnapp puts it, "if you have only answers you aren't supposed to leave you with answers because then you never question yourself and you forget about it."

While fans might be curious, for the guy who actually plays Will, there doesn't even need to be be a discussion about Will's sexuality because the issue is "beside the point." For him, the important thing about the character is that Will and his dungeons and dragons-enthusiast friends are all "outsiders" but have found a strong and loyal friendship with each other "because they have been bullied in some way.”

He questions if "being sensitive, or a loner, or a teenager who likes photography, or a girl with red hair and big glasses makes you gay." He reminds fans that even though he is "only twelve" (oh snap!) he knows that everyone can "relate to being "different." Will and his friends are relatable and their sexuality doesn't assist or take away from that relatability in Schnapp's mind.

The following is Schnapps' full text:

"So I thought it would be time to jump into the conversation. I've been reading stuff for a while. I think everyone here is missing the point. An author called Gary Schmidt came to speak at our school this week and he said that good stories aren't supposed to leave you with answers because then you never question yourself and you forget about it. A good book, or a good show leaves a lot of unanswered questions but makes you think. Which is what you are all doing. For me, Will being gay or not is besides the point. Stranger Things is a show about a bunch of kids who are outsiders and find each other because they have been bullied in some way or are different. Does being sensitive, or a loner, or a teenager who likes photography, or a girl with red hair and big glasses, make you gay? I'm only 12 but I do know we all relate to being different. And that's why I think the Duffers wrote the show the way they did. So you can ask all these questions. I hope the real answer never comes out!"

Whether you agree with him or not, it's clear that Noah Schnapp has put a great deal of thought into his character's sexuality, and whether or not that sexuality should matter to an audience. He, like his character, is a thoughtful, young man. The Upside Down must really give a person perspective.