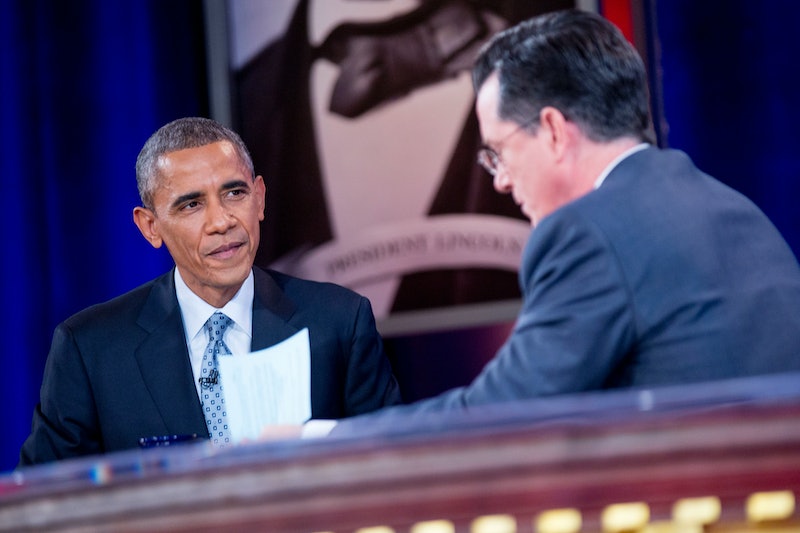 "A friend of this show is about to lose his job, so last week I helped him transition to his second career," Stephen Colbert proclaimed while introducing President Obama's Late Show appearance on Oct. 17. Obama was the first sitting president to appear as a guest on a late night talk show back in 2009, and he is well-known for his comedic late night show appearances. He has slow jammed the news with Jimmy Fallon, read mean tweets about himself for Jimmy Kimmel, and more.

But Obama is also known for using his humor to make important statements, and his Late Show appearance is no exception. When Colbert dressed up as Randy, the office manager, to help Obama practice interviewing for jobs, he ran into trouble when he asked a personal question.

"And it doesn't say here — where were you born?" Colbert asked.

In response, Obama just stared at Colbert for a beat before asking, "Really?"

That's all the president needed to do to shut down the "Birther" movement, which many of Obama's opponents — namely, Trump — have ridiculously used to claim he wasn't born in the United States. Obama's curt response should set the record straight once and for all, even if it should have been considered "set" long ago. He also tackled topics including healthcare, climate change, and the Iran nuclear deal.

"I reopened relations with Cuba for the first time in 50 years," Obama says as an example of one of his accomplishments.

"I'd call that one conversational Spanish," Colbert responds.

But possibly the most timely issue Obama tackled on The Late Show was voting. When asked how he would appeal to millennials, Obama said, "Well, I'd tell them straight up that this is the most important election of their lifetimes. That they have the opportunity to make history and that the results in November could change their lives forever so they have to get out there and vote." He echoed this sentiment later on in the segment, saying, "You know what I really love doing is encouraging the youth of America to get out and vote this November so that the good work that we've done over the past eight years can continue on into the future."

Since the "Late Show" is a network television show, Colbert couldn't allow Obama to endorse a candidate during the segment. But, he did ask Obama to choose between two "snacks" instead.

Obama has publicly endorsed Hillary Clinton for president. Interestingly enough, she has also traveled to more than 100 countries. Coincidence? I think not.

Hopefully, Obama will continue to bless us with his hilarious presence on late night TV. In the meantime, fingers crossed that millennials heed his message to go vote.