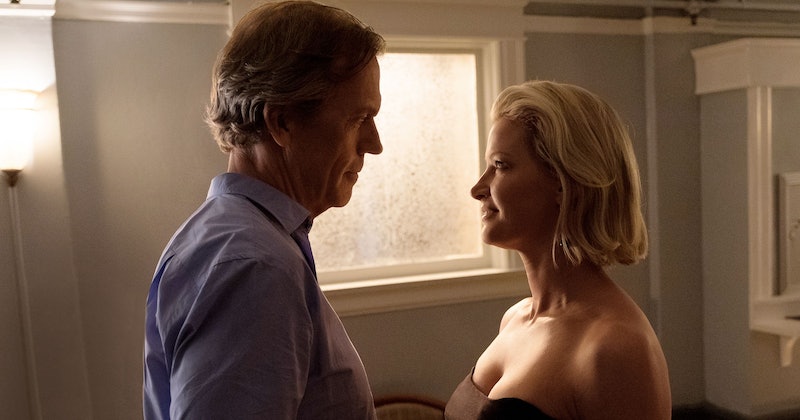 Hugh Laurie is about to return to our small screens to play a doctor — but Eldon Chance is no Dr. House on Hulu's new series Chance, which begins streaming on Oct. 19. This time around, he'll play a San Francisco-based forensic neuropsychiatrist who, according to the website's official synopsis, gets sucked into "a violent and dangerous world of mistaken identity, police corruption and mental illness." Anyone who loves a good psychological thriller will want to carve out some time for a marathon this weekend, because this show is not to be missed. Crime dramas and thrillers frequently draw from real life cases, so you may be wondering if Hulu's Chance is based on a true story.

First, let's take a look at the full synopsis from Hulu's website:

After an ill-advised decision regarding an alluring patient who may or may not be struggling with a multiple personality disorder, Chance finds himself in the crosshairs of her abusive spouse, who also happens to be a ruthless police detective. In over his head, Chance’s decent into the city’s shadowy underbelly, all while navigating the waters of a contentious divorce and the tribulations of his teenage daughter, soon spirals into an ever deepening exploration of one of mankind’s final frontiers — the shadowy, undiscovered country of the human mind.

If you're thinking this sounds like it's straight from the pages of a crime novel, you're correct. Chance is not based on a true story — rather, it's based on Kem Nunn's book of the same name. So, my next question was whether or not Nunn drew inspiration from actual events — and the answer is no. The popular novel comes purely from the author's imagination, and he's also the executive producer of the series.

According to Entertainment Weekly, Nunn has made a second career for himself on the small screen — so this isn't his first foray into television. He has written for Deadwood and John From Cincinnati, in addition to acting as a writer and producer on Sons of Anarchy — so Nunn is no stranger to writing for fictional TV shows. The same article indicates that, although Chance is a great show, it's not especially realistic let alone based on a true story — it includes a combination of "procedural investigation, florid soap opera, dreamy philosophical statements about the Banach-Tarski paradox, and a running subplot about furniture fraud." That's a whole lot of subplots for one show and, as it turns out, Chance's original genre was intended to be a romantic comedy before it made the dramatic shift to a dark, psychological thriller.

If you're a Hitchcock fan, elements of the series may look familiar to you — multiple outlets, including The Los Angeles Daily News, have drawn parallels between Chance and Vertigo. They're both set in San Francisco and feature a seductive blonde who may or may not be the male protagonist's downfall. Between the Vertigo parallels and the dramatic plot devices that are often used in crime novels, elements of the show may seem familiar — but the series itself is (thankfully) pure fiction.

More like this
Nicola Coughlan Shared A Lady Whistledown Excerpt From ‘Bridgerton’ Season 3
By Grace Wehniainen, Alyssa Lapid and Sam Ramsden
Harry Lawtey Is Weighing Up The Price Of Success
By Olivia-Anne Cleary
Ruth Wilson’s New Thriller Spotlights A Controversial Irish Institution
By Darshita Goyal
'Heartstopper' S2 Just Welcomed Four Brand New Cast Members
By Nola Ojomu and Sam Ramsden
Get Even More From Bustle — Sign Up For The Newsletter