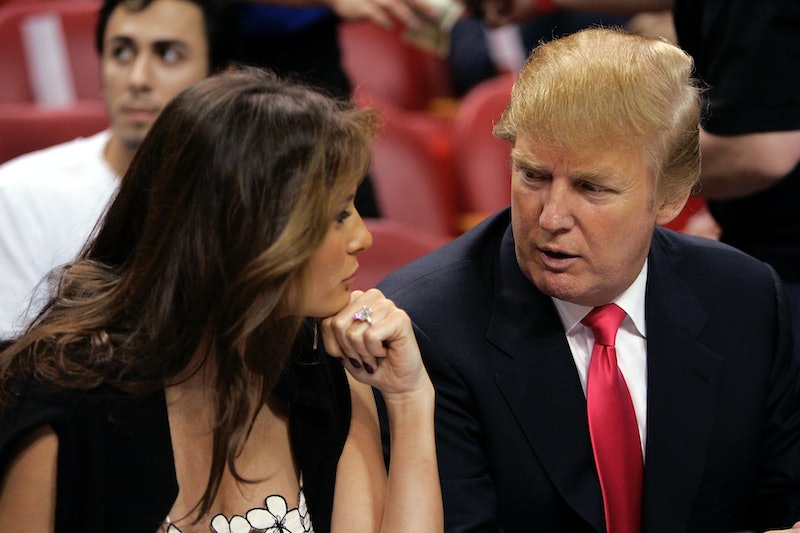 After days of more allegations of sexually inappropriate behavior being lodged against her husband (all of which he denies), Melania Trump spoke to Anderson Cooper about the controversy, defended her husband, and tackled some of the many issues facing the 2016 election. While much of the conversation centered on the revelations from the Access Hollywood tape and the allegations that followed, the scariest part of Melania's CNN interview was her insistence that the election is rigged.

That is what Trump himself has been saying on the campaign trail as of late. You'll hear him at rallies saying, "Voter fraud is very, very common." Just Monday night on the campaign trail he claimed that academic studies show massive voter fraud from "illegal immigrants" — even though the studies he referenced claim nothing of the sort. "They even want to try and rig the election at the polling booths," he told the crowd in Wisconsin. And now he has his surrogates, Melania included, fanning the same dangerous flames.

During the interview, Cooper asked Melania point blank about the issue. "Your husband is saying that he believes the election is rigged, that there are forces trying to rig it, do you feel that as well?" he asked. The question is probably the most loaded of the entire interview, because faith in the country's Democratic system is on the line, which makes her answer all the more troublesome. She didn't explicitly say yes or no, but she did imply that it is by answering the question with an attack on the media:

Well I see it how the media is portraying. I see how they're reporting, and how they say what they want to say and what they don't want to say. For example, he makes a speech 45 minutes long, they take a sentence out, and they're going on and on and on about that sentence. Nothing else.

Melania went on to say that Donald talks about the issues, but said that the media doesn't cover him when he does so. "That's what American people want to hear. It's about issues, about jobs, about the future of our country, and that's what he wants to do," she argued. But supposedly the media is just focused on his offensive one-liners. And that, she implies, is the reason the election is supposedly rigged.

It's important to note this wasn't the first time Melania criticized the news media with Cooper on Monday. Throughout the interview she attacked the press for treating her unfairly. She even thought the timing of the latest revelations about Trump's inappropriate comments to Billy Bush and the sexual assault accusations that followed were worth questioning. "Why now, why after so many years? Why three weeks before the election?" she asked Cooper. Then she went on to answer her own question:

It was the media. It was NBC, it was Access Hollywood. It was left wing — left wing media. You could see that and the way it comes out, everything was organized. Every Friday, every Friday something comes out. So they play, they play, they play. And it was hour after hour. I watched TV, it was hour after hour. Because they want to influence the American people how to vote, and they're influencing in the wrong way.

Attacking the media on its own would be bad enough, but connecting it to a rigged election is even more worrisome — especially given the number of Trump surrogates doing so more generally. Former New York City Mayor Rudy Giuliani played to the talking points Sunday morning on CNN's State of the Union: "When I ran for mayor of New York City the first time, some people voted eight and 10 times."

The Trump campaign needs to stop making this argument. As the top Congressional Democrats, Nancy Pelosi and Harry Reid, have argued, the stakes are "bigger than any of us and bigger than this election." It's about the system itself. They called on Republican leaders to counter the claim that the game is "rigged" in a statement. "At some point, the good of the country must outweigh the instinct for political self-preservation," Pelosi and Reid wrote.

Until the Republicans do so — or even better yet, until Trump himself stops making these outrageous claims — answers like Melania's remain problematic.