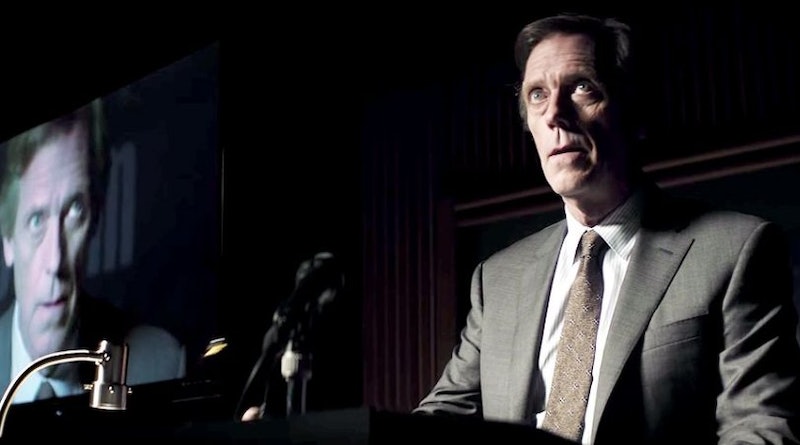 If you love psychological thrillers, you'll want to clear your calendar so you can marathon Hulu's new series Chance, starring Hugh Laurie. Laurie will take on the role of a doctor again, but Eldon Chance is no Gregory House. No, this forensic neuropsychiatrist is in a class of his own and he'll quickly find himself in hot water as he becomes mired in San Francisco's political corruption. Oh, and did I mention that Dr. Chance made some questionable decisions regarding a young female patient who may have multiple personality disorder? Based on the show's synopsis, I definitely don't envy this fellow — but is Hugh Laurie's character on Chance a real person?

Chance is a completely fictional show, based on a crime novel by Kem Nunn, so Eldon Chance is a fictitious character. However, Laurie did his homework before jumping into the role of a forensic neuropsychiatrist. It's an incredibly complex profession to begin with — and it presumably becomes infinitely more complicated when the doctor is pulled into a violent underworld of corruption. In an interview with The New York Times, Laurie said the field of neuroscience fascinates him:

I think neuroscience is one of the most exciting avenues of exploration still open to us. We’ve been to the moon, and we’ve climbed Everest, and James Cameron went to the bottom of the Marianas Trench. But we haven’t even crossed the threshold of understanding how the brain works and what human consciousness really is — which part of it comprises the mind, the soul, all these little words we come up with to define the indefinable.

The actor told The Los Angeles Daily News that, in preparation for his role, he met with a London-based neuropsychiatrist and asked him specifically about his relationships with patients. For example, does he keep in touch with former patients, even if it's just in the form of a Christmas card? The doctor's answer was "absolutely not," so it's safe to assume that Laurie's character doesn't represent your average neuropsychiatrist — although it could be argued that Chance serves as a cautionary (and exceptionally dramatic) tale of what can go wrong when doctors become personally involved with their patients.

Laurie also referenced his meeting with the aforementioned neuropsychiatrist at the Television Critics Association summer press tour in August. As reported by USA Today, Laurie said the doctor enlightened him about the reality of the profession:

"He said, 'The best I can do is manage incredibly damaged people (and) find the least bad option. Nobody leaves my office doing cartwheels.'"

It's clear from Laurie's research that it's crucial for neuropsychiatrists to establish firm boundaries and resist the urge to become emotionally invested in their patients. This is surely one of the most difficult aspects of the profession and, based on what we know about Eldon Chance's character, it's not surprising that he falls down a rabbit hole after becoming too close with a patient. According to The Colorado Springs Gazette, the doctor has been "worn down to a nub" after a long career of trying to help individuals whose chances for recovery are slim to none. When he meets Jaclyn, the abused wife of a detective, he views it as an opportunity to finally save someone — a goal that has evaded him throughout his career.

Although Eldon Chance is a fictional character and his behavior is highly unusual for someone in the profession of neuropsychiatry, the show will cast on a light on how taxing and often thankless the profession can be for those who dedicate their lives to helping people who don't have a strong chance of moving on to happy, healthy lives after treatment.