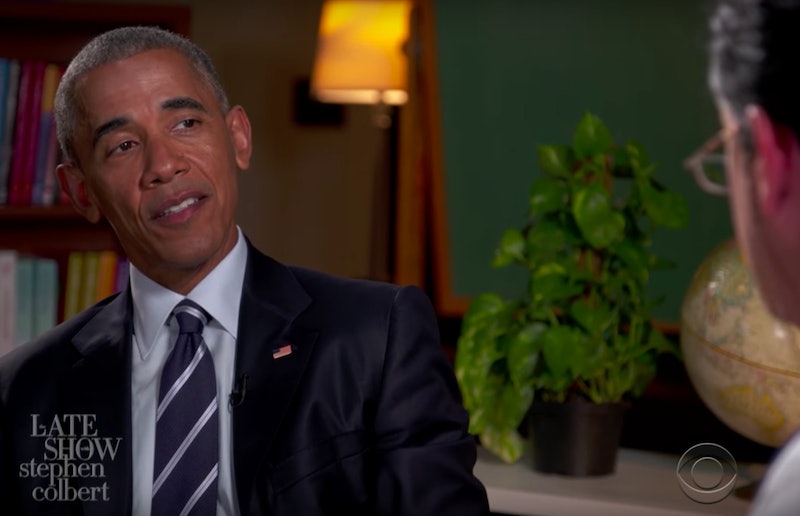 President Obama was a surprise guest on The Late Show on Oct. 18. During his appearance, he practiced for his hypothetical future job interviews with none other than Stephen Colbert, who donned a get-up as "Randy the office manager" to help Obama find his next calling now that he can't be president anymore. After all, as Colbert pointed out, 55 is "a tough time to be starting over for a man." Obama's appearance on The Late Show cemented his status as one of the funniest politicians ever, but he snuck in an important election message, too.

Obama can't continue on as president, so we have to vote for someone else; that's what this whole election 2016 is all about, after all. But Colbert wanted to know more about why. "So, tell me why you're leaving," Colbert, or rather Randy, said. "You say you're not being terminated, but it sounds like you can't stay, is that true?" Obama explained that he's leaving because "it's required" thanks to the 22nd Amendment. Colbert told him he may want to reframe his explanation: "When you say staying in your job would be unconstitutional, what employers hear is that you stole office supplies."

But whatever way you put it, come January Obama will be out and either Hillary Clinton or Donald Trump will be taking his place. And that's why Obama snuck in a get-out-the vote pitch to millennials. It was so sly you almost might have missed it. Moving from social media to the attempt of businesses to gain younger customers, Colbert asked, "How do you plan to get their attention?" The response is perfect:

Well, I tell them straight up that this is the most important election of their lifetimes. That they have the opportunity to make history and that the results in November could change their lives forever so they have to get out there and vote.

The studio audience clapped enthusiastically, but Colbert wasn't listening. He looks up from his phone to say, "Sorry, I didn't catch all of that. Did you know there's Snapchat filter that gives you a flower crown?" But that's just fine because Obama got the message across one more time, this time a little less seamlessly. Colbert asked about hobbies and Obama said: "You know what I really love doing is encouraging the youth of America to get out and vote this November so that the good work that we've done over the past eight years can continue on into the future."

There was no explicit endorsement of Clinton, but Colbert did give him an interesting choice. "Would you care for an Extra-Fiber Nutrient Bar, which has traveled to more than 100 countries," Colbert ass, "or this shriveled tangerine, covered in golden retriever hair, filled with bile, that I wouldn't leave alone with the woman I love?" Obama doesn't even hesitate. "I think I'll go with the fiber nutrient bar," he responded.

As for the new job talk, in the end, Obama might be pleased to try something new. After all, he hasn't been moving up lately. Colbert asked, "I don't see any promotions for the last eight years. That's not always good. Can you explain that?" Obama shot back with perfect comedic timing: "Honestly, there wasn't a lot of room for advancement at my last job." And that's maybe why in his next job he wants a corner office, "or at least one with corners."

Let's just hope there's someone in the Oval who knows what they're doing — and can try to be as funny as Obama.