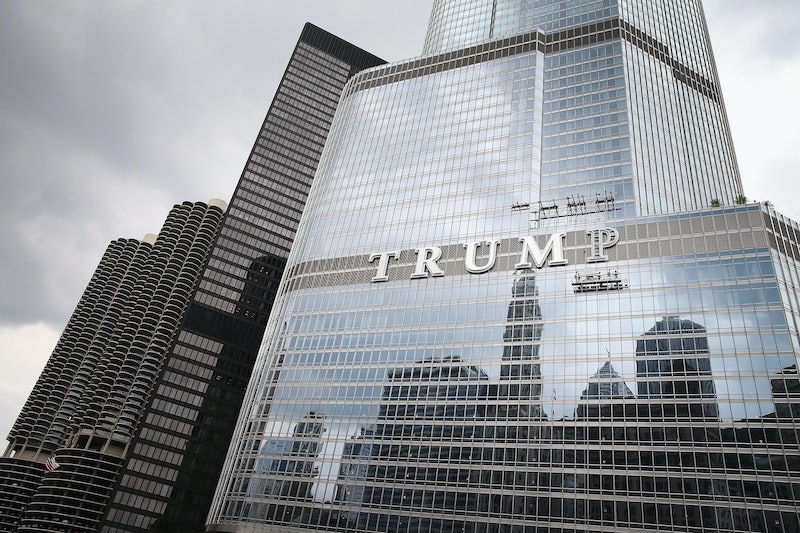 The media has been covering Donald Trump's business woes from his presidential campaign since July 2015, when he first announced his candidacy (you know, the speech in which he called Mexican immigrants rapists and murderers). Right away, there was talk that this kind of behavior would hurt his bottom line, and yet that hasn't stopped him. In the year since then, there have been more exposés, and now it's more than clear that Trump's customers are turning against him and his brand — which is all he will have left if the election doesn't go his way.

The latest coverage from The New York Times paints a dire picture not just for Trump's company, but any brand that's associated with it — including those of his daughter, Ivanka. One of the most powerful examples given is that of Natalie Davis, a New Jersey woman who bought a sundress from one of the Ivanka Trump clothing lines. She told The Times that it fit her perfectly, but after Trump's comments on African Americans, she had to reconsider her purchase, so she returned it. "There’s no way one penny of my money is going to anything with the Trump name on it," Davis told the paper.

And Davis isn't alone. The Times piece featured interviews with folks who have shunned everything from Trump's hotels and vineyards to coffee shops that rent within his property holdings. Gary Berry, the man they interviewed who is no longer drinking Trump's wine, told the paper that he used to buy bottles for celebrations. But then Trump insulted the Gold Star family of the late Army Capt. Humayun Khan following the Democratic National Convention, and that was it for Berry, too. “I am sorry, that’s just not what you do,” Berry told the Times. “Trump is despicable in my mind. I’m not buying Trump anymore.”

And these are just individuals. Whole companies have decided not to make bookings at Trump resorts anymore. One Chicago branding company told the paper they won't reimburse employee expenses from Trump's hotels. That would potentially back up a story ran in August by Fortune, in which they quoted data from a travel site Hipmunk which contended that Trump hotel bookings were way down (the Trump Hotels' CEO has claimed that's not representative of their overall bookings). Even if there's some businesses that don't care, a portion definitely have voted with their wallets.

And even if he retains some business, it would appear Trump's brand could be significantly damaged. Way back in January, before he even won the Republican nomination, Politico reported that Trump's "deals, brand and branded developments" were worth $3 billion — more than all his other holdings combined. But then in July, Luxury Daily reported that the Trump brand no longer added value to condominiums. The ones with his name on them used to sell for more, but they no longer do.

If the Trump brand doesn't add any value to luxury real estate, who's to say that it's worth putting his name on any of his other ventures? Given that the Trump Organization is privately owned, we may not know the true extent of the damage, but these reports don't look good.