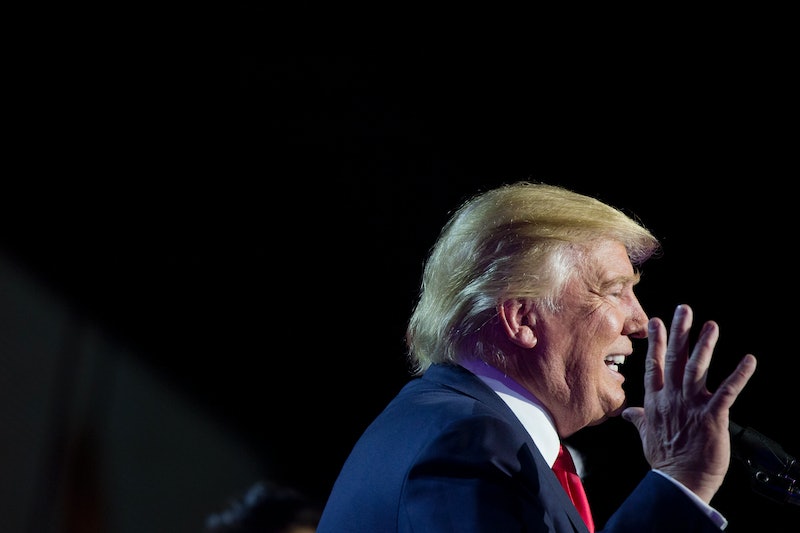 "Donald Trump: He can't read this, but he is afraid of it." That's the phrase broadcast on a new anti-Donald-Trump billboard in Dearborn, Michigan, home to the largest population of Arab Americans and Muslim Americans in the United States. The message is written in Arabic and sits high over the city's inbound interstate, hoping to inspire conversation between Dearborn's 95,000 residents — 30 percent of whom are of Arab descent. But the billboard does more than spark dialogue. It targets the heart of the Trump campaign, which from its infancy used fear of "the other" to bolster the Republican nominee's attacks and xenophobic policies on Muslims.

The new Arabic billboard, funded by the Nuisance Committee super PAC, will be in place until Election Day. The super PAC was started by Cards Against Humanity co-creator Max Temkin, and has raised more than $410,000 in the hopes of "driving Trump nuts." Definitely a worthy cause, if you ask me.

Nuisance Committee spokeswoman Melissa Harris discussed the billboard with The Detroit Free Press, saying: "We came up with it because we believe that Donald Trump's hateful rhetoric is not based on reality. It's based in fear. And we think that irrational fear is what's driving his anti-immigrant message."

This message has been the cornerstone of Trump's campaign, with calls to ban Muslims from entering the United States serving as rallying cries for both him and his supporters alike. Though the proposal has shifted throughout his campaign, eventually landing on "extreme vetting" which would include an ideological test for people wishing to immigrate, the core of Trump's message has remained the same: We should be afraid of Muslims, because they are not American (never mind the 3.3 million Muslim Americans already living in the states).

In his most recent reiteration of this fear, Trump essentially blamed the San Bernardino shooting on Muslim Americans, stating during the second presidential debate that they failed to report the shooters in time.

"We have to be sure that Muslims come in and report when they see something going on," Trump said. "When they see hatred going on, they have to report it." He is also clinging to the debunked theory that "many people saw the bombs all over the apartment," again pinning the blame on Muslim Americans for "failing to report" those bombs.

Through Trump's statements and proposals, voters have seen time and time again how this fear of Muslims has driven the Republican nominee's campaign. One can fairly imagine that Trump's knee-jerk reaction to the billboard — especially with his name attached — would inspire fear in the nominee. At the very least, he'd use it to inspire fear in his supporters.