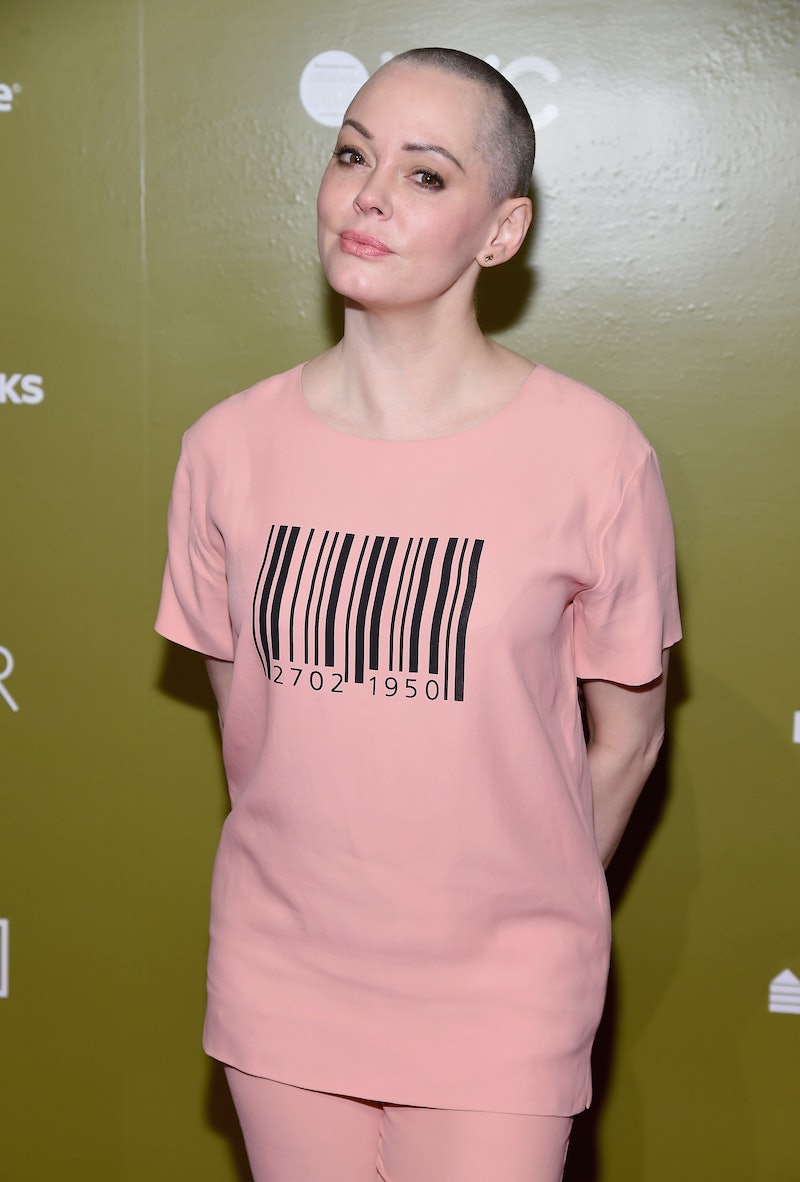 Regularly outspoken against blatant social, moral, and practical discrepancies in Hollywood, Rose McGowan is continuing to push for tangible change in the industry after penning a short open letter about sexual assault and accountability on her Twitter Monday morning. McGowan is continuing the conversation after she alleged that she was raped by an unnamed Hollywood studio executive (Bustle has reached out to McGowan’s representative regarding the allegations, but has not heard back at this time). Now, she is calling for those in the industry, and in a similar position, to "be brave." Her words are admirable. Her fight is pressing. Her compassion appears depthless. Could McGowan be a true force of change within the film and television industries, which fall squarely under the Hollywood umbrella and are McGowan's primary spheres of influence, with her calls for action?

She opens her letter with a strong call to action, writing:

"To the women and men in the entertainment industry, who know exactly whom and what I am talking about, I say be brave. Do not work with those you know to be offenders or you are no better than they. Take a stand."

This opening statement capitalizes on a growing dialogue about how we listen, support, and help those who have been victims of sexual assault. Her use of the word "brave" here renews her efforts to engage in a meaningful dialogue and build a strong industry-level network of support around the issue of sexual assault, itself a long-standing issue in said industry. You can practically feel her moving us toward affecting real change.

McGowan's atypical use of her position as a famous person to act as a voice for reason and change has been especially notable in recent years. Hers has been a voice speaking out against systemic sexism in the entertainment industry: she has stood up for other actresses who have become critical targets, and she spoken out against egregious (yet somehow continually accepted) casting practices. She has not let her voice be smothered; instead, she has used all of her power to act as a player rather than pawn.

On the topic of sexual assault, these renewed efforts to call attention to the alleged prevalence of sexual assault in the entertainment industry are made even more gut-wrenching, but necessary, when voiced by a woman who speaks from alleged experience. McGowan is certainly not the only woman in the industry who is demanding the rhetoric change around the issue of sexual assault. But her voice definitely drowns out the dissent when you take a moment to consider her depth of knowledge on the topic, her resolve, and how loudly and readily she voices her feelings. It's refreshing and empowering to see a female celebrity so deeply avowed in her politics that that passion could actually inspire real change.

It should be acknowledged that, while McGowan's authority on this issue was allegedly gained through entirely unfortunate circumstances, it is a sign of her ferocious and supportive image that she is reconfiguring her personal pain into potential public triumph. Her efforts call for all of us to start reconsidering where on the spectrum we fall in regards to this issue, and how we plan to help women and men who have survived being victimized by, and stigmatized after, sexual assault.