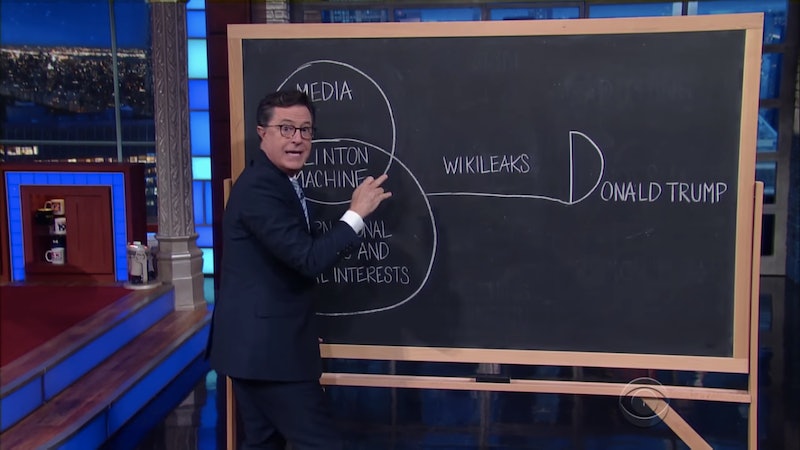 On the Oct. 17 episode of The Late Show with Stephen Colbert, the host tried getting to the root of Donald Trump's conspiracy theories about what will keep him from winning the presidency on Election Day. From sex scandals to negative media coverage to the Clinton Machine, it's like there's no end to the list of things supposedly trying to take down the Republican nominee. Every week, the man finds himself in a new political tornado, each one triggering a dip in his poll numbers, necessitating apology statements from himself and his family, prompting tougher questions at debates and interviews, and, best of all, padding Saturday Night Live’s ideas for ways to mock him.

This cycle is explicable to the GOP nominee only by the existence of a corrupt system placing roadblocks in his path to the White House. Only this can account for the endless number of attacks on an honorable, knowledgeable, experienced, open-minded, and honest candidate like Trump.

It was this question that Colbert wanted to answer, and after carefully examining the web of conspiracies surrounding the Trump campaign, he arrived at an answer. The thing launching bombs at Trump's chances of becoming president is, well, phallic. Take a look at the final result of the comedian's diagram for your answer.

"It all makes sense, folks!" Colbert said. "Who made Donald Trump walk into that Miss Universe dressing room?" Colbert points to the board in response. "Who made him brag on that bus? Whose idea was it for him to run for president in the first place?" All answers pointing to the phallic symbol on the chalkboard. But for this one, Colbert took the chalk and vigorously filled in more parts of the diagram. "There's no way to say it — it's been under our nose the whole time."

His argument is actually quite compelling when you look at all the evidence. Earlier in the segment, while discussing one of the latest sexual harassment accusations against Trump, Colbert plays a clip of former Miss Arizona Tasha Dixon describing instances in which the presidential hopeful would walk into dressing rooms unannounced, followed by a clip of Trump's rebuttal at a rally: "Lies. Lies. No witnesses, no nothing. All big lies." Colbert then asked, "Was there anyone, anyone at all backstage at this pageant who could corroborate her story?"

What comes next? A recording of Trump's own answer in a 2001 Howard Stern interview:

With these kinds of... let's call them "memory lapses," not being uncommon when it comes to the candidate's campaign, it does seem like Trump may be unaware of the effects his version of masculinity has had on this election. Luckily, Colbert is here to make that clear for Trump (and the American public).