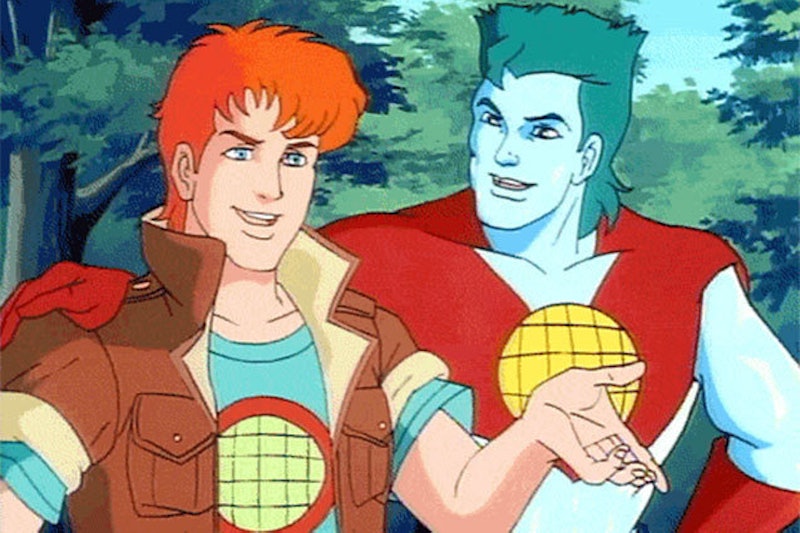 Earth, fire, wind, water, and heart: it looks like your favorite/only environmental super hero is returning in a big way. Reportedly Leonardo DiCaprio, real life Planeteer, is producing a modern Captain Planet film adaptation. And this film comes with a twist: according to The Hollywood Reporter, Captain Planet himself is going to be portrayed as “a washed-up has-been who needs the kids more than they need him.” Which is an interesting angle that should probably make us question if Captain Planet is really better left to the ‘90s. Could Captain Planet be gracefully done, getting the Christopher Nolan treatment with a dark and gritty reboot?

On the one hand, we are living in an ice-cap melting world, one that’s dying ever-so-slowly from global warming (as much as I do appreciate that it’s 80 degrees in October right now). Maybe now is the right time to revive the franchise in a potent, poignant way. But, on the other hand, probably not. The entire gloriousness of Captain Planet was in its preachy hokeyness, and even as a child that was apparent. I only want to see a Captain Planet that retains his true molten core, and that would include the following things...

It's pretty remarkable that those could legit summon a person. You couldn't even tell if yours was blue or indigo. (And did it mean you were happy or morose?)

There really isn't enough in media these days.

4. The Entirely Ethnically Diverse Cast Of Planeteers Is Cool

Look at that all the hairspiration going on in that gif, the sheer body of it, those gray streaks? Look out for that as an Instagram trend once this movie hits theaters.

Did Suchi every really contribute anything dynamic to the plot, or was he just there to lighten up the somewhat heavy episodes about how our entire planet is dying, and, whoops, there goes the ozone? Either way, people just love monkeys, so his existence was always appreciated.

7. The Entire Cast Of Eco-Villains

Seriously, some of the least intimidating yet most hilarious enemies of all time, including Looten Plunder. Looten Plunder is an actual Captain Planet baddie, that's now going to mess with you whenever you think of the theme song.

8. And Of Course That Iconic Theme Song

They can retain that early '90s cheese, or they can recycle the track. I mean, you can always pull a Ghostbusters and get some mid-2000s emo band to make a cover of it. What's Panic! At The Disco up to these days?

9. The Inspiring Dialogue That Moved You To Stop Deforestation And End Pollution Once And For All

I remember after an episode I once threw out a Wendy's cup that I saw in the parking lot, so you can't say that the show didn't reach me at all.

10. The Notion That If We All Take Personal Responsibility We Could Help Save The World

Or if we get rings that will give us supernatural powers. One or the other.

11. The Planeteer Alerts That Reinforce The Previous Statement By Introducing Us To Real Life Issues Impacting The Well-Being Of Our Planet

I always loved a reality-inducing guilt trip after I watch a children's TV show, so let's close the movie that way.

12. The Hilarious Assertion That Heart Is An Element

Argue it to the grave, Planeteers.

I don't know about you, but I feel like I need this movie now more than ever. Almost as much as I need to re-watch the original series.