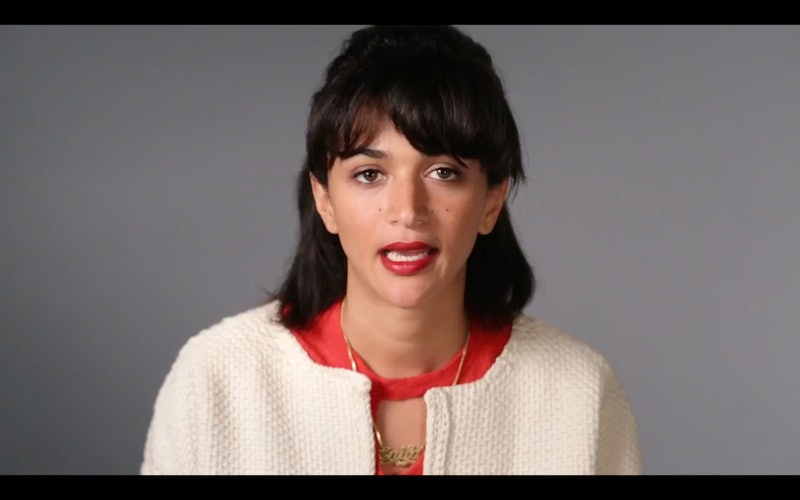 Although Donald Trump's rise to political prominence has been a difficult and painful experience for the millions of people he has relentlessly denigrated, there is one silver lining to his candidacy: the renewed national dialogue on sexual assault. Since the leaked recording of his sexually predatory conversation with Billy Bush in 2005 reached national media attention, the response has been both heartbreaking and empowering. As a dual effort to both give women space to openly talk about the negative effects of sexual assault and fight Trump, these celebrities appeared in a powerful video for Hillary Clinton in which they got real about why sexual assault is not OK.

The video, produced by the group Humanity for Hillary, features women telling their stories about sexual assault and explaining why rape culture is not OK. Over a dozen celebrities, including Meryl Streep, Whoopi Goldberg, Amy Schumer, Rose McGowan, and Amber Tamblyn, appear in the video, with Tamblyn taking a leading role.

#ItsNotOk started trending on Twitter shortly after the audio recording of Trump leaked on Oct. 7, as women and allies spoke out in the millions about their experiences of sexual assault. Kelly Oxford, who asked women to tweet her their first assaults, received more than 30 million messages from women around the world.

The video powerfully builds on that theme of openly acknowledging assault. By being vocal about their experiences, women are reducing the stigma and shame associated with sexual assault while shifting the blame to where it truly belongs, onto the people who commit it and propagate its acceptance.

Of course, the tragedy is that this even has to be said in the first place, but unfortunately, there is a real need for pieces like this. Many men and women have justified Trump's behavior and comments since the recording leaked, failing to realize that his words go beyond "locker room talk," as his campaign called it in the aftermath of the leak. The importance of recognizing sexual assault and predatory language when they occur is incredibly crucial, because it can help victims seek the right kind of support and help communities teach people who are using threatening speech about why what they're doing is wrong. Although this piece points out that American society isn't where it should be, it's also a step in the right direction toward a safer and more equal society for women.

Although its necessity is sad, the piece does an incredible job of communicating the urgency of change in rape culture. Some of the women described assaults which took place when they were as young as 12, and any society in which behavior like that is overlooked or tolerated needs to be fixed fast. No matter the circumstances, sexual assault is never OK, and thanks to projects like this, more people will realize that.