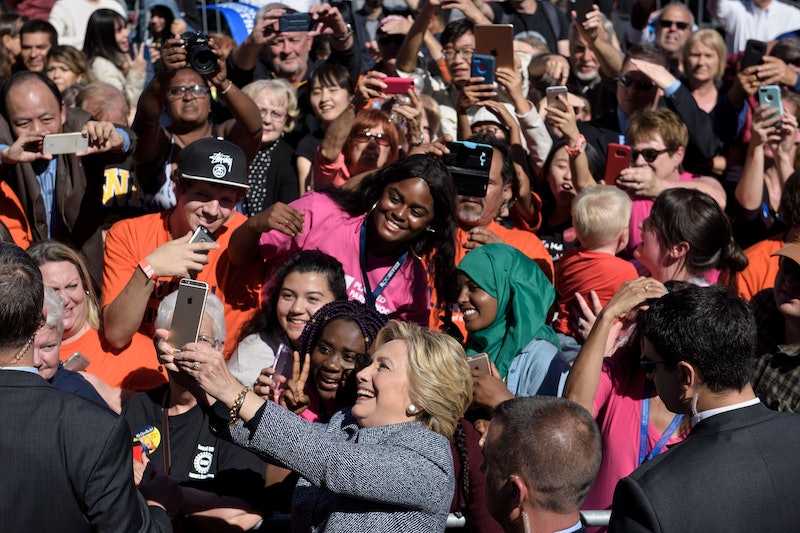 If it's the kind of thing that appeals to you, you can watch Lin-Manuel Miranda rap about Hillary Clinton. It's totally charming, even if it is a little cringeworthy (I mean, I love Hamilton and all, but it still feels like a 30 Rock sketch come to life, crossed with a bit of Schoolhouse Rock). Miranda's rhyming pitch is a pretty transparent appeal to a group that the Clinton campaign has desperately sought: the 18-29-year-old demographic, which came out in droves to help elect President Barack Obama.

Though millennials have been loath to support Donald Trump, they have been nonetheless tepid about the prospect of electing Clinton compared to Obama. During the Democratic primaries, Bernie Sanders nabbed overwhelming support from the younger generation, forcing Clinton's victory to come mostly from older Democrats.

But despite agitas that Clinton's lack of enthusiasm among millennials could stymie the coalition of nonwhite voters, progressive whites, and young voters which propelled Obama's majority, Clinton's status among young'uns has actually improved pretty impressively in the past few weeks. She's on pace to make a showing among young voters that's more than respectable — it's downright historic.

A poll released Monday by USA Today, in partnership with Rock the Vote, finds Clinton beating Trump by 48 percent among voters aged 18-34. Obama beat Mitt Romney by 29 percent in that demographic in 2012, and John McCain by 37 percent in 2008. Of course, a big part of that is Trump's continued abysmal showing among the youth — just 20 percent say they support him. But the most interesting part of the poll is that Clinton's vote share has increased to 68 percent. Those are Obama numbers. Those are Bernie Sanders numbers.

There's the usual caveat — this is only one poll, and we won't know for sure how accurate it is until the election on Nov. 8. And furthermore, this data makes it hard to discern how much of this support is really for Clinton herself compared to other factors. According to this poll, the primary reason given for voting Clinton is keeping Trump out of the White House.

But perhaps the most interesting piece of data is the collapse of third-party support. A month and a half ago, 27 percent of young voters were prepared to vote for either Jill Stein or Gary Johnson. After a period of bad press for the third-party candidates, support for them has dropped to a combined 9 percent; most of that loss has been lapped up by Clinton.

There are still three weeks left before election day, so things could change, but the current polling data suggests that change could bring even more good news for Clinton. Millennial men support her more than millennial women by a not-insignificant difference of 65 to 48 percent. However, considering how women overall have fled Trump for Clinton in the wake of sexual assault allegations, as Harry Enten noted at FiveThiryEight, young women could be poised to do the same. That swing could lead Clinton to a truly unprecedented win among the younger generation.