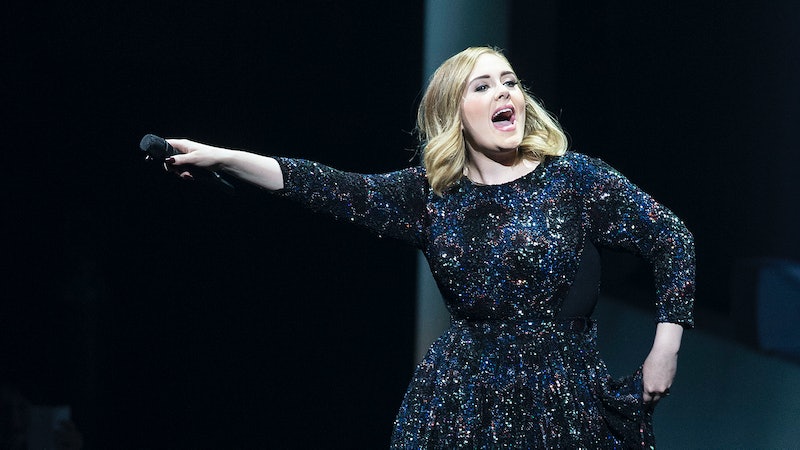 You might think you know what grand love gestures are, but I am here to tell you that you don't. Adele does. Yes, that Adele, the singer with pipes of gold. Sorry guys, facts are facts and I can prove it. As E! News reports, fans speculated that Adele's boyfriend, Simon Konecki, wrote her confetti "love notes" at her concert that rained down over her and the audience in honor of their fifth anniversary. So, you know, you're free to agree with me about this romantic gesture being a truly extraordinary one at any time now.

What makes the gesture so special is how grand and yet how subtle it is at the same time. According to E!, white confetti is usually blasted out at Adele's concerts that have her song lyrics written on them. But in this instance, there was pink confetti, in a different handwriting, with sweet, non-lyrical notes. Some examples of the note content: "You are an angel," "I love you," and "Love you long time" scribbled onto the strips for her and all her concert goers to see. It's obvious that it wasn't about him getting any shine, it was just about surprising her with heartfelt exaltations, because he's proud of her and their relationship together.

This is hardly the first time Konecki and Adele have proven their love for one another. Here are just some ways the two have always taken the time to show that love is very much alive:

First Things First, Here's A Close Up Of The Love Note Confetti

It's even worse (so, so much better) seeing it like this, isn't it?

She Credits Him For Helping With Her Success

According to Harper's Bazaar, in fall of 2015 Adele told 60 Minutes Australia, "Being in such an amazing relationship with someone that's so there for me and so loyal and is really part of my core now. That's what made me write about everything I've ever done, because I've got his love."

Jealousy Isn't In Their Vocabulary

She told E! Online this about her sentimental song lyrics in October 2015:

"We're like in a solid relationship and he's my soul mate and my best mate, and he sees it as my art and my outlet and something that I did before him. ['Hello'] is not about a past boyfriend or anything like that, but if it was, I think he'd be alright with it anyway because we're in a strong healthy place. It wouldn't be an issue."

He's Been With Her In Sickness And In Health

She told Vogue in its March 2016 issue, that Konecki was by her side after her vocal chord surgery, five years prior.

He Is Her (Occasional) Muse

Adele explained to Beats 1 Radio about her Konecki-inspired song,

Basically, he made her less jaded. It's cool. It's fine. It's nbd. *Cries*

So, yeah. While the confetti notes are swoon-worthy, it's clear that romance is not a one-off thing in this relationship. These two know they've got it good with each other.