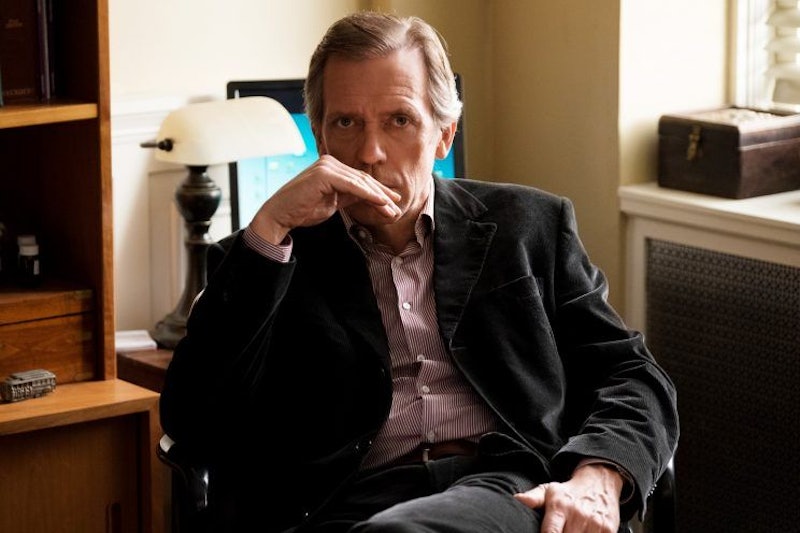 Hugh Laurie may have got his big break on American television with House (he was already famous for years in his native England due to his comedy relationship with Stephen Fry), but he’s bid Gregory House a firm adieu. After a stint in the short series The Night Manager, Laurie is back with Chance, a new streaming series from Hulu. Based on a novel by Kem Nunn, Chance tells the story of a San Francisco-based psychiatrist caught up in an underbelly of mental illness, sex, and crime. How different is Chance the TV show from Chance the book?

Chance is a psychological thriller, in which Dr. Eldon Chance (Hugh Laurie on television) becomes sexually involved with a female patient, Jaclyn Blackstone (played by Gretchen Mol). While this is troubling enough, this patient also has multiple personality disorder and an abusive, homicide detective for an ex-husband (played by Paul Adelstein. The book goes very deep into the noir genre, so if you love films like Double Indemnity, you’ll probably love Chance. In the book, Dr. Chance must figure out if Jaclyn actually has a personality disorder or if she’s just a pathological liar like her ex-husband. Oh, and there’s a blade-wielding street poet named D that Dr. Chance befriends. Suffice it to say that I think D’s (he’s played by Ethan Suplee in the show) blades will be a help for Dr. Chance.

But how close will the 10-episode Hulu series skim the book? The show will “pretty much be the book,” author Kem Nunn told Entertainment Weekly. After Season 1, though, the show will be “an ongoing conversation.” Nunn (who is also an executive producer) doesn’t seem worried, though — he’s just happy to get to turn his novel into a series. “For Hugh and [Room director] Lenny [Abrahamson] to sign on was huge,” Nunn said.

Nunn has plenty of other experience on the television screen. He was a co-creator and producer on HBO’s John From Cincinnati , a writer and producer on Sons of Anarchy, and a writer on Deadwood. He’s also written six novels. Judging by Nunn’s body of work on television, he loves the dark and moody, so it’s no surprise that he brought Chance to the small screen.

And why did Laurie decide to take on Chance? Besides being a departure from House, he told Yahoo TV he liked the “melancholy” of the series.

“Maybe I’m a melancholy soul, or maybe I’m just so cheerful that melancholy appears exotic to me. I leave you to draw your own conclusions. Which am I? No, all right, I’m the first: I’m the melancholy soul, and I’m drawn to that kind of contemplation. [Chance] is sort of adrift, has lost his way, and is on the point of becoming overwhelmed by the suffering he not just sees around him, but actually deals with as part of his professional life. Human beings come to him damaged, they come to him out of control, looking for help, and he has become overwhelmed by his inability to do anything.”

Laurie made the point to Yahoo that Gregory House could at least cure someone’s cold, but in therapy, psychiatrists are just trying to make things better for their patients — it’s all about managing symptoms. “The best you can hope for is the least bad option,” said Laurie. “It’s just trying to find the least bad option in a sea of misery and damage and pain. That’s the world Chance is in. I don’t think I’d last a week.” Me either.

Suffice it to say that Hulu is looking at a hit with Chance — the show has already been picked up for a second season, and if it’s anything as dramatic as the novel, noir lovers and casual viewers alike will tune in in droves.