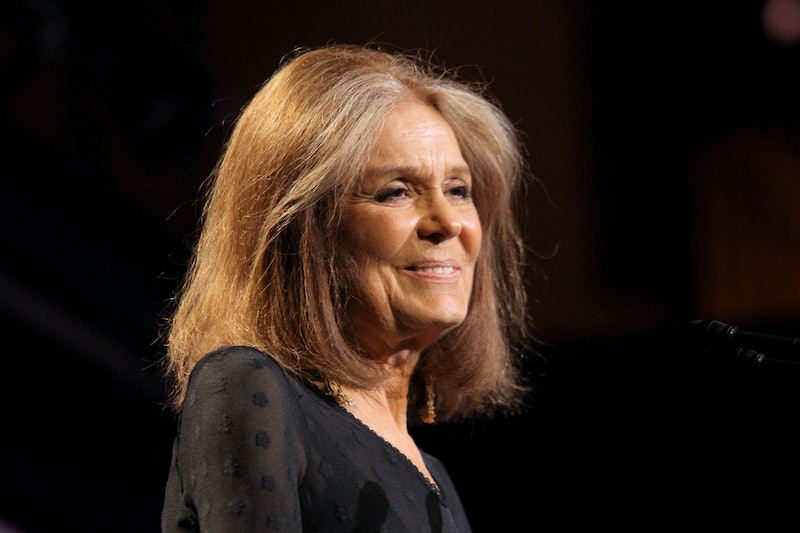 Gloria Steinem, the unequivocal champion of gender equality through the past half century, turns 80 years old today. And, as expected, she's looking mighty fine doing it too (that hair!). From journalist to activist, Gloria has been at the forefront of the feminist movement during its most pivotal era, and she shows no signs of slowing down. To celebrate, (beyond indulging in some well earned cake) we’re reading some of her most powerful pieces from the past four (!) decades.

Published in her magazine Ms . in 1972, this piece sees Steinem go all out on the American advertising industry, slamming the manner in which women were portrayed in supposedly "modern" magazines. At one point, she asks Leonard Lauder why his ad campaigns completely reject the notion of the hard-working woman his mother's company was founded on; "That doesn't matter, he says. He knows his customers and they would like to be kept women. That's why he will never advertise in Ms."

When first starting out as a freelance journalist, Gloria was given assignments focusing exclusively on “fashion and food and make-up and babies" and she referred to this specific piece as the "low point in her life." Her pain is palpable as she slips in a few wry asides ("Hosiery manufacturers are delighted.") making the piece unintentionally hilarious and all the more perfect for it.

3. “Address to the Women of America”

At the founding of the National Women’s Political Caucus in 1971, Steinem delivered one of her most memorable and important speeches. She went beyond the borders of gender inequality, attacking racial prejudice and the imbalance of the social classes:

“This is no simple reform. It really is a revolution. Sex and race, because they are easy, visible differences, have been the primary ways of organizing human beings into superior and inferior groups, and into the cheap labor on which this system still depends. We are talking about a society in which there will be no roles other than those chosen, or those earned. We are really talking about humanism.”

Though it is hard to imagine the face of feminism as one of Hugh Hefner’s leading ladies, Gloria’s two-part series A Bunny’s Tale documented her personal account of going undercover as a Playboy bunny in 1963. Though Steinem left the mansion decidedly unimpressed, we can’t say we feel the same about how well she rocked the outfit.

In this epic essay written for Time magazine in 1970, Steinem writes about her vision for a Utopian future in which gay marriage is accepted and legal.

“Single women will have the right to stay single without ridicule, without the attitudes now betrayed by "spinster" and "bachelor." Lesbians or homosexuals will no longer be denied legally binding marriages, complete with mutual-support agreements and inheritance rights. Paradoxically, the number of homosexuals may get smaller. With fewer over-possessive mothers and fewer fathers who hold up an impossibly cruel or perfectionist idea of manhood, boys will be less likely to be denied or reject their identity as males”

We're not there yet, people, but we're getting closer.

6. "Notes on a Tour of the Indian Women's Movement"

With eight decades under her belt, you'd think Steinem might like to slow things down a little. (She's certainly earned it!). But no, with the help of Ruchira Gupta, Gloria is hoping to spread the feminist movement abroad, doing so in India at the moment, where it is most desperately needed.

"... the sight of these fresh-faced, shy, spirited girls has driven it out of my head. They could be from anywhere. One asks how I became a writer, which is what she wants to do. Another wants to be a dancer. Others say they hope to become teachers or health professionals. I ask what one thing would help each of them right now – the next day and the next. Most say education. Then one is silent. Finally, she says: “the truth.”

In her 2004 keynote speech at the 3rd Annual Women and Power Conference, Gloria delivered a message with just as much fortitude and passion that she possessed at the start of her activism. Calling for a new shift in the nation's focus from and emphasis on "independence to interdependence", Steinem proved that although we've still got far to go, we've certainly come a long way.

For this, and so much more, we thank you, Gloria. Happy Birthday,

More like this
Jennette McCurdy’s First Kiss On 'iCarly' Didn’t Go As Planned
By Bustle Editors
8 Unmissable Moments To Relive From The Commonwealth Games
By El Hunt
10 Must-Read New Books Out This Week
By K.W. Colyard
Woodstock Co-Founder Michael Lang Faced Several Lawsuits After The 1999 Festival
By Brad Witter
Get Even More From Bustle — Sign Up For The Newsletter