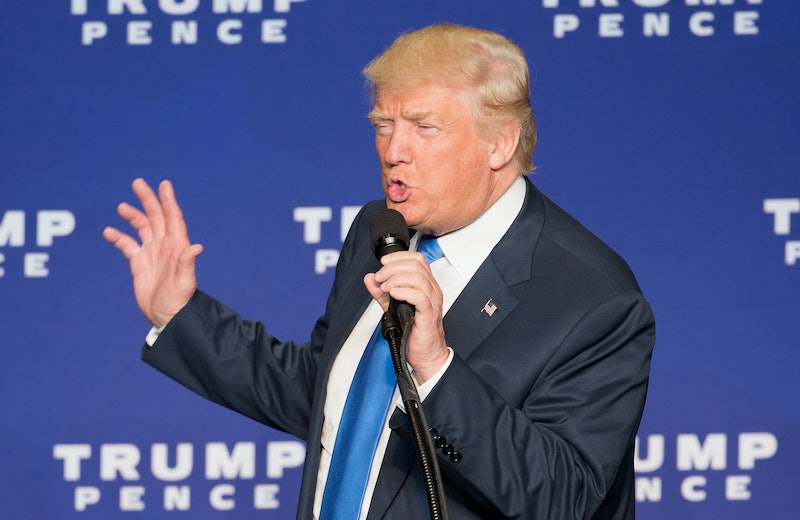 For days, Republican presidential nominee Donald Trump has been trying out a new explanation for his declining poll numbers, and his ever-fleeting chances of actually winning on Nov. 8 by claiming that the whole thing is rigged. At least that's the excuse Trump's been running with in the aftermath of multiple sexual assault allegations (which he vehemently denies). These claims also come after his first and second debate performances that could be generously described as horrendous and bad, respectively. He's even already claiming voter fraud, but here's one voter fraud statistic that could dispel Trump's claims.

If you've been following the election at all closely, or if you know the first thing about Trump's track record as a political figure, it'll come as no surprise to learn he's trying to delegitimize the process, rather than admit he's losing on merit. However, there is a set of data that so conclusively, definitively blows up the claims he's making, and you can thank Loyola Law School professor Justin Levitt for that.

Levitt conducted an investigation, looking for any cases of impersonation voter fraud (that's when somebody tries to vote as someone else, assuming a false identity to get their hands on a ballot that shouldn't be theirs) from 2000 through 2014. What he found was nothing short of startling. Out of more than 1 billion ballots cast across the country during that 14-year span, a mere 31 contained "credible evidence" of potential voter fraud.

In other words, the Republican efforts to push voter ID laws through state legislatures across the country? Yeah, those aren't needed, and the case that they're politically-motivated acts of voter suppression look stronger now than ever.

The overwhelming scarcity of cases of voter impersonation fraud don't just undermine Trump's fears about the election being stolen from him — he's already urged residents of white Pennsylvania communities to watch out for fraud in the "other communities" in Philadelphia, a city that's 44 percent black — but it shines a dim light on the voter fraud talk the GOP has been advancing for years. Make no mistake: Even though Trump is going further than your average Republican might, the party laid the groundwork for this kind of fear-mongering.

But here's another problem: despite that eye-popping, 31-in-a-billion takeaway stat, a lot of people do believe it happens all the time. As demonstrated in a Washington Post/ABC News poll taken in September, only 63 percent of Americans have confidence that the presidential election votes will be counted accurately, compared to 35 percent who are not confident. The poll also highlighted the fact that Trump supporters are particularly susceptible to believing voter fraud is a common occurrence, as a whopping 69 percent claimed it happened "very/somewhat often."

While this discrepancy between people's feelings about voter fraud and the reality is most pronounced on the right side of American politics, it's a broad-based phenomenon. A full 46 percent overall replied that voter fraud happens "very/somewhat often," with Hillary Clinton supporters clocking in at 28 percent. When you consider those numbers in light of Levitt's analysis, which found only 31 credible impersonation cases out of 1 billion — that'd be 0.0000031 percent of all ballots cast in that time — it's clear that the American electorate has been sold a notion about the pervasiveness of such fraud that simply doesn't align with the facts.

It does make for fertile ground for Trump to sow these doubts and cast these aspersions, however, so the next time you hear him angrily denouncing the shadowy forces aligned against him, you should keep this stuff in mind. Because if anything looks assured at this point, it's that the remaining couple of weeks of the 2016 race aren't going to get calmer from here — to the contrary, it seems like the Trump campaign is getting more and more destructive as his deficit in the polls widens.