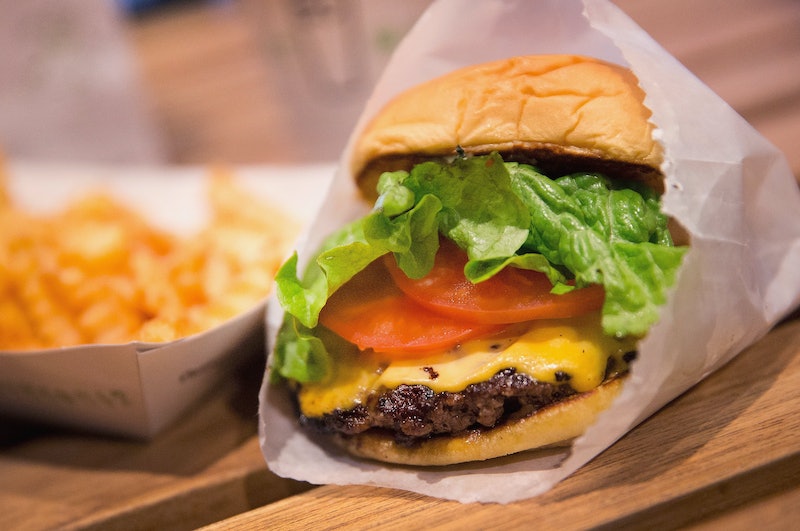 I hate endless lines about as much as I love Shake Shack. Unfortunately, those two tend to be synonymous — until now: As of Oct. 17, Shake Shack is testing mobile ordering via a shiny, happy app. The test allows users to order fan faves like ShackBurgers, crinkle cut fries, and frozen custard from their phone. No! More! Lines! No! More! Waiting! I mean, like, yes, there will still be waiting for the food to be made, but the app schedules food pick-up times in 15-minute increments, which eliminates the endless wandering and wondering and trying not to get in hangry peoples' way.

There are a few catches, though. Right now, for example, the test is occurring at one Shake Shack location, and one Shake Shack location only; the mobile ordering system was rolled out exclusively at the Midtown East Shack in Manhattan this week. And unfortunately, the app, which was developed with mobile product agency Fuzz, mobile ordering platform Olo, guest engagement platform Paytronix and Applause, a digital experience testing service, is only available to iOS users. If you are not near that particular Shake Shack location, and you are not an iOS user, you're out of luck.

But for those who have access to both of those things, wonders await, according to the press release. In addition to a mobile menu and the ability to reserve a pick up time, "The Shack App," as it's called, includes a location finder, a nutritional information guide, the ability to cultivate a "favorites" list, and access to the live Shack Cam, which runs from the Madison Square Park location.

What's more, an Android version is in development, so keep hope alive, non-iPhone users! Your time in the sun, free of those plastic buzzers that you cling to, sweaty-palmed and starving, will soon arrive. Furthermore, although the press release notes that "no timeline has been established for future Shacks to launch the app," hopes are high that the leap to a larger market is imminent. "We’ve got a lot to learn, and we intend to take our time listening to our guests and tweaking the app before launching it in additional markets," said Shake Shack CEO Randy Garutti. Ugh, Randy, you are so considerate and attune to our needs!

Here's hoping that this is the beginning of a beautiful friendship. With fries. And milkshakes. Because that is the best.

More like this
How To Turn Off Night Mode On Your iPhone Camera
By Emma Carey
Behind The Hilarity Of The "POV: You Walk Into My Room" TikTok Trend
By Lexi Inks
20 Smart Devices Under $35 That’ll Change The Entire Vibe Of Your Home
By Emma Carey
Here's How To Get Your iPhone To Update Automatically Forever
By Emma Carey
Get Even More From Bustle — Sign Up For The Newsletter