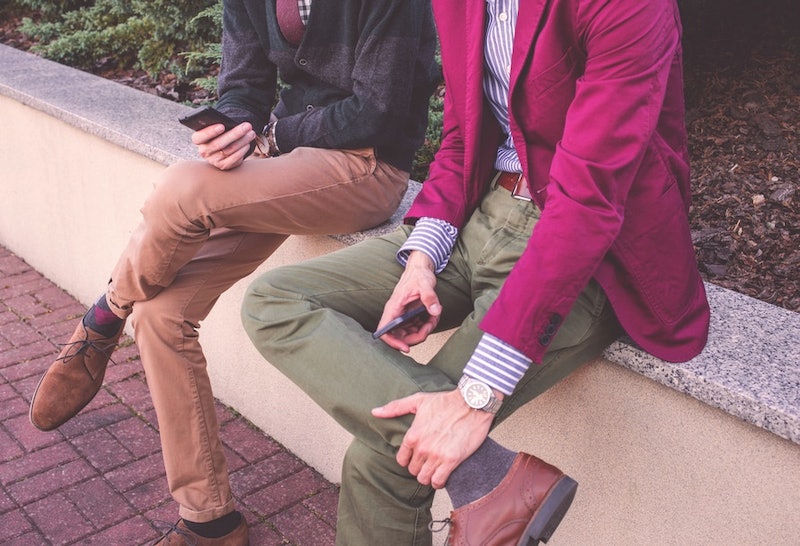 I challenge you to find a couple who is happy all the time in their relationship. Won't happen. Even the happiest couples go through rough patches, or even just days where they're really annoyed with each other. Rough patches can pass with relative ease, or they can morph into the types of relationship slumps that make you second guess whether you should still be together.

Doubting that your relationship is everything you hoped it would be is often just a stress response. It can be a relationship killer, "but doubt can also mean that things are progressing to another stage of commitment where differences are worked on and growth happens," according to Harley Therapy. When the high of new love wears off, and when changes, stressors, and disagreements filter into the relationship, that's when doubts make their dramatic and worrisome presence known.

If you're experiencing doubts, it's not a sign that love is dead or that you're destined to be alone. There's a lot of fairytale nonsense floating around out there that leads us to believe relationships should be perfect, the people we love should never upset us, and that if we have doubts, it must mean we haven't found our soul mates. None of that is true. Here are some more reliable ways to tell if you need to break up, or if you're just in a slump, pieced together from my work with couples as a Domestic Violence Victim Advocate and Planned Parenthood Certified Responsible Sexuality Educator.

1. If You're Fighting All The Time

Fighting all the time isn't always a bad thing, believe it or now. Some couples are just really passionate, and they communicate their feelings freely and often. If you're both arguers, and you have tiffs on a regular basis, but you resolve them and move on quickly, then you might not even be in a slump. You might just be arguers. Working on your communication skills, and making a commitment to be respectful even when you're angry, is often all you need. If, however, you're fighting all the time because one of you is mistreating the other, because you can't get past a major issue in your relationship, or because you're just really unhappy, that's a more reliable sign that things are over. The takeaway here is that it's more about why you're fighting then how often.

Do you ever just look at your partner and think "I literally cannot stand you. Like, I do not like you at all right now."? Not liking your partner doesn't mean it's time to break up. It means it's time for a little space, or to resolve a lingering issue. If your negative feelings go away, after that, you're experiencing normal feelings that lots of people in healthy relationships deal with. If you can't stand your partner, and that feeling won't go away, it just gets worse, it's possible you've grown and changed into people who aren't compatible anymore. If you think you dislike your partner so much that you don't want to be with them anymore, that's when you know it's not just a slump.

3. If You Want Different Things

What kind of cruel world do we live in when a perfectly good relationship can't succeed because of differing goals? Most things have reasonable middle ground or some sort of compromise that both partners can live with. If you're having problems because of differing goals, sometimes a little compromise is all you need. Still, it's hard to compromise over things like kids. You can't have half a kid. If there's no compromise that you can both live with, then it might be time to break up, no matter how much you love each other. Life is so unfair, sometimes, you guys.

4. If You're Not Having Sex

All you happy asexuals out there, I see you. But if you're not asexual, and your once happy sex life is now in the toilet, it could be nothing, or it could be a sign of bigger problems. All couples get into a slump. It's no big deal. The trick to knowing if it's just a slump, or if it's something more serious, is to ask yourself if you still want to have sex with your partner. I don't mean right this second but in general. If the answer is "yes, but I've just been so tired lately" it's probably just a slump. If the answer is more like "I never want them to touch me again" it's probably break up time.

5. If You Don't Hang Out Anymore

6. If You're Mean To Each Other

Being mean to each other isn't cool. But it happens. The kind of mean that indicated you're going through a rough patch is the kind you regret soon after it happens. It's the snarky thing you say when you're grumpy or tired or feeling impatient. If you're mean to each other on a consistent basis, it denotes a lack of respect. It can also point to resentments and unresolved issues, which can be relationship killers. If the mean behavior involves insults, put downs, or controlling behaviors, those are signs of abuse. If it's not abuse (which it probably is) then it's, at the very least, unhealthy. Unhealthy relationships are often best ended rather than repaired.

7. If You Have Feelings For Someone Else

Sigh. The worst. Listen, though, because I'm going to speak some truth at you. When you're in a relationship, your heart doesn't shut off like it's on a switch. You will meet people you're attracted to, and even sometimes develop feelings for them. If you're happy in your relationship, these feelings and attractions pass because you don't act on them (unless you have an open relationship, but that's a talk for another day). If you do act on them, or if they become so strong you can't ignore them and feel a strong need to leave your partner, then you're probably headed for breakup territory. Otherwise, you're normal.

Your relationship should make you happy. It doesn't need to (and won't) make you happy all the time, but in general, it should be a source of happiness. You should be content much of the time. If you're unhappy and it's situational, like due to a stressful week, a disagreement, or a financial issue, you can move past those. If you're unhappy in general, and you can't put your finger on why, and nothing you do to resolve your unhappiness helps, it's probably a sign that you need to break up.

9. If You Don't Feel Supported

A relationship should be made of real partners. If you have an idea or a goal, you should feel like you can talk to your partner about it, and receive positive feedback and support. If you feel like you don't have your partner's support because of a disagreement on one specific thing, there's room for compromise. If you feel, in general, that you don't have support, or if you feel like you have to trick your partner into supporting you, that's unhealthy. If you're afraid to talk to your partner about things like going back to school, going out with friends, buying something, or changing jobs, that's not real support. You might be facing a partner with control issues. If that's the case, it's not a slump, it's time to go. Control issues can escalate to abuse. Not OK.

Just remember, as a rule of thumb, if your problem or issue is situational or temporary, it's just a slump. If there's no hope for improvement, and your unhappiness won't go away, that's when it's time to ask yourself if you should break up.