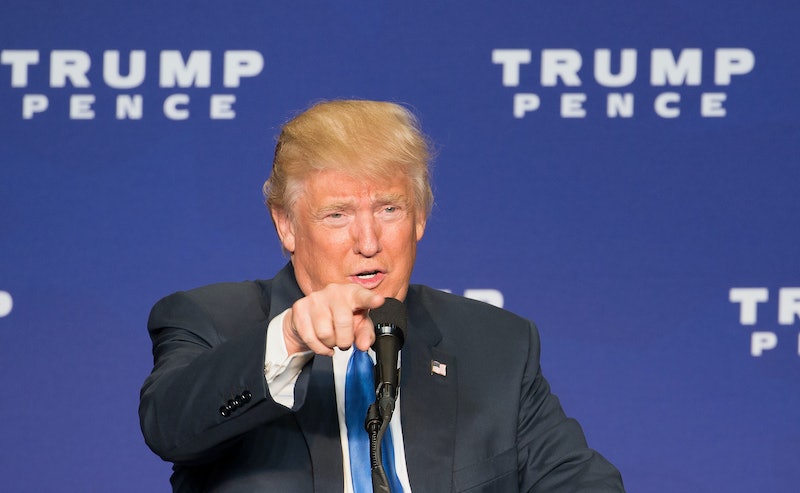 Following the past week of sexual assault allegations against the Republican presidential candidate Donald Trump, six witness have corroborated Natasha Stoynoff's assault story, confirming that former People writer Stoynoff's account of being attacked by Trump in 2005 lines up with what they were told at the time. Trump continues to deny these allegations.

The original story of Stoynoff's assault was published in People was published on Oct. 12, and detailed a firsthand account of a Trump interview assignment in 2005, during which the real estate mogul sexually assaulted her while his pregnant wife Melania briefly left to change outfits: "We walked into that room alone, and Trump shut the door behind us. I turned around, and within seconds he was pushing me against the wall and forcing his tongue down my throat."

The article goes on to detail Trump later allegedly whispering to Stoynoff about having an affair, and according to Stoynoff's account, the whispered statements all occurred just before Melania came into the room for the interview. After the story was released to the public, Trump denied the accusations at a rally, questioning her decision to wait years to come forward, even saying: "Look at her. Look at her words. You tell me what you think. I don't think so. I don't think so."

In the meantime, the witnesses who have come forward in support of Stoynoff have made it clear that not only do they believe her, but they will publicly corroborate her story.

One of the six witnesses to speak out was Stoynoff's long-time friend Liza Herz, who claimed she encountered Melania with Stoynoff outside the Trump Tower months after the attack, during which Melania allegedly made friendly conversation with Stoynoff, asking why she never came around anymore. Earlier this week, Melania threatened to sue People magazine, claiming she was never friends with Stoynoff and wouldn't be able to recognize her on the street. However, according to Herz's account, both her college buddy Stoynoff and the former model exchanged familiar words: "They chatted in a friendly way. And what struck me most was that Melania was carrying a child and wearing heels."

Liz McNeil, East Coast News Editor for People, also recounted her memory of Stoynoff's changed demeanor following the assault in the updated People report: "She was very upset and told me how he shoved her against a wall. The thing I remember most was how scared she was. I felt I had to protect her."

The other witnesses who have come forward and confirmed her story as consistent include Marina Grasic, an old friend; Paul McLaughlin, her former journalism professor; Mary Green, People's Deputy East Coast News Editor; and Liza Hamm, a former coworker. They all shared how Stoynoff opened up to them after the attack and was legitimately conflicted about how to move forward. At this point, Stoynoff has not officially pressed charges against Trump.