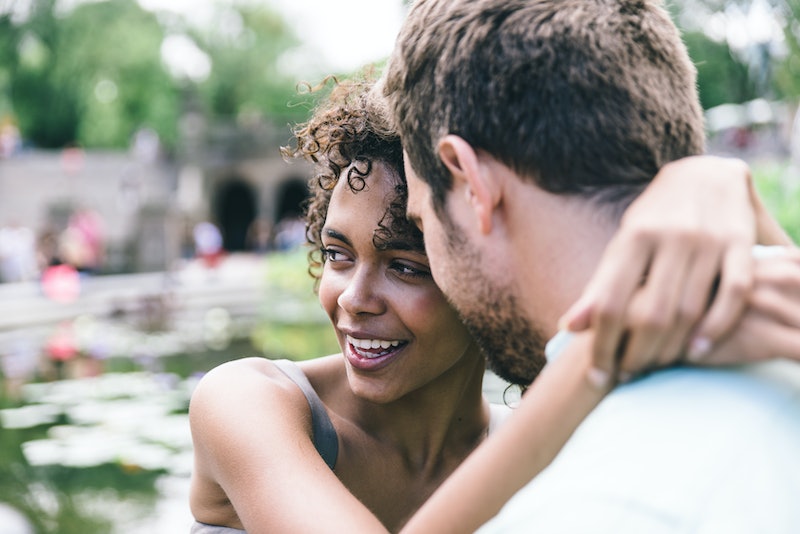 Truth be told, I like the idea of marriage. I don't believe it's a necessity for my life to be complete or whole, but at the same time, it's something I always saw for myself. You've likely heard that Millennials are walking down the aisle later, and maybe you've seen it within your friends, but that's not the only marriage trend among our generation. According to a new study, they aren't just getting married later in life, Millennials are choosing to stay unmarried in growing rates, too.

“Millennials aren’t big on tradition,” relationship expert and author April Masini tells Bustle. “They prefer hanging out to dating, renting to buying and living together to marriage. It’s not that they don’t want a commitment — they do. They are having meaningful relationships and there have been studies that show they’re actually having less sex at their age than prior generations — so it’s not they want freedom to sleep around. They just don’t want to get married.”

Allen Downey, a professor of computer science at Olin College, took data from the National Survey of Family Growth and analyzed the age that men and women first got married by decade of birth. Downey then analyzed projections for Millennials.

"With everything from hookup culture to poly lifestyles and open relationships, there's an emerging expansion of views on what partnerships can look like. This has led to a desire to exploring more than the outdated 'one method for all' that is marriage."

He found that women who were born in the 1980s and 1990s are on track to stay unmarried at rates much higher than previous generations. In fact, the marriage rate for women currently in their early 30s is close to zero. By the time women born in the 40s reached the age of 23, only 25 percent of them remained unmarried. Now, the fraction of unmarried women born in the 90s is 81 percent. So what's the reason?

Why Millennials Aren't Getting Married

“The paradigms are shifting and the old model requiring marriage vows to validate one's relationship doesn't appeal,” psychologist, relationship expert and author of The Ultimate Guide to a Multi-Orgasmic Life Antonia Hall, tells Bustle. “Many Millennials were raised with rising divorce rates and broken homes, so they're far less likely to buy into marriage as the only or best form of relationship for themselves. Add to that the increase in educational costs and debt, and Millennials feel less financially secure, which makes entering into what's considered a binding contract with their significant other far less appealing. With everything from hookup culture to poly lifestyles and open relationships, there's an emerging expansion of views on what partnerships can look like. This has led to a desire to exploring more than the outdated 'one method for all' that is marriage."

It really depends on you. Another recent survey of about 1,000 14 to 35-year-olds conducted by ACUVUE Brand Contact Lenses found that 52 percent of Millennials “strongly agree” that marriage is important to them, and 73 percent think having a happily family is also important.

“Commitment is key, not what it is called,” Rhonda Milrad, the founder and chief relationship advisor of relationship advice app, Relationup tells Bustle. “As we see from marriage statistics, being legally married doesn’t guarantee that the couple is dedicated to one another and able to weather storms.”

“Any relationship is a risk. The key to success is understanding what it takes to make it work and being willing to do those things,” marriage coach, author, and host of weekly radio show, “Happily Ever After is Just the Beginning,” Lesli Doares tells Bustle. “Marriage provides a certain structure that can take much of the guesswork out of those things.”

Marriage isn’t a one-size-fits-all entity, Doares says. In reality, it can and should be personalized to the couple. “Nothing requires more of us as individuals than to make room for another person in all aspects of our lives,” Doares says. “There is no hierarchy in marriage so it is often necessary to challenge what we believe and why in order to forge a mutual path forward. The willingness to do this in our small world allows us to do it in the larger world and this is why most societies have some formal entity like marriage. It provides a sense of stability and order. The devil, like most things, is in the details.”

Marriage may be important to some, but less important for others. Overall, it really doesn’t matter how many Millennials aren’t getting married or why. What really matters is you're happy and content with whatever choice you decide to make.

More like this
50 Valentine’s Day Instagram Captions To Post If You’re Single
By Jessica Booth, Lexi Inks and Carolyn Steber
My Partner Wants Me To Wear A Diaper During Sex. Help!
By Sophia Benoit
12 Active Date Ideas That'll Get You & Your Boo Outside
By Lexi Inks
The 3 Zodiac Signs Most Likely To Get Married Later In Life
By Kristine Fellizar
Get Even More From Bustle — Sign Up For The Newsletter
From hair trends to relationship advice, our daily newsletter has everything you need to sound like a person who’s on TikTok, even if you aren’t.