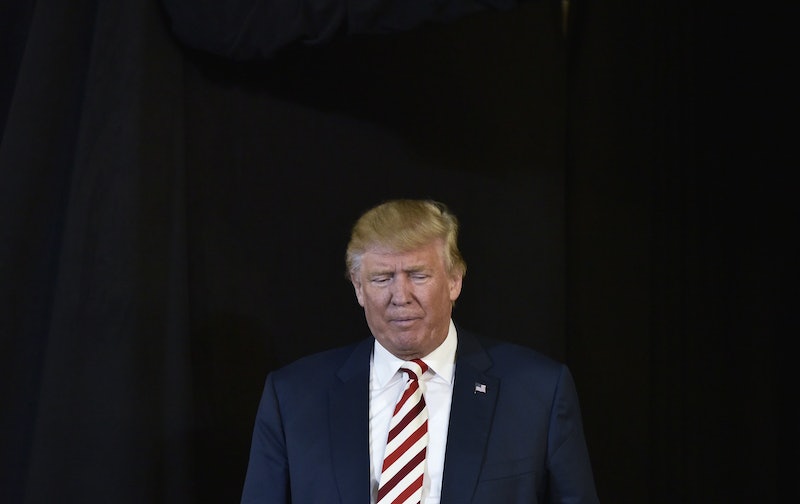 In what possibly marks one of his most layered and meta statements ever, while speaking at a rally in Colorado Springs on Thursday, Donald Trump said reporters won't be around much longer and told his followers to stop paying attention to the press, and instead read the internet. If you're feeling confused by the implicit contradictions between ignoring the press while reading the internet, you're not alone. A survey published on March 16, by the American Press Institute revealed that millennials between ages 18-34 read roughly 74 percent of their news online.

But millennials certainly aren't alone in their regular habit of paying attention to the online press: another survey from Pew Research Center reveals that between the ages of 30-49, adults read 50 percent of their news online. This, of course, brings us to the present point: what exactly did Trump mean about reporters disappearing?!

His speech at the rally in Colorado Springs, Colorado, has also included Trump proposing term limits for Congress members, videos of self-proclaimed "deplorables" shouting "lock her up" in reference to Democratic candidate Hillary Clinton. However, in the meta self-interest of a website that provides online reporting, Trump's statements about journalism resound the loudest, both in their confusion and conviction.

The irony of citing a Washington Post journalist's Twitter while reporting Trump instructing his supporters to "read the internet" instead of paying attention to the press is certainly not lost. However, these statements are hardly surprising given Trump's outspoken dislike of journalists.

During a rally in Grand Rapids back in Dec. 2015, while joking about his deep distaste for reporters Trump was recorded clarifying that while he doesn't like journalists, he would never kill them:

We're still left with the question, when Trump instructs his followers to "read the internet," what areas of the internet constitute as pure, and which fall under the umbrella of the press?

The contentious relationship between Trump and the media reached a climax during a news conference in early June, when CNN reports revealed that during a 40-minute time span Trump called various reporters "sleazy" and "dishonest" before saying:

I think the political press is among the most dishonest people that I have ever met, I have to tell you. I see the stories, and I see the way they're couched.

While it's indisputable that the rise of the internet has shifted the medium of journalism, telling people to read the internet as an avoidance of the press is a statement that with time, is becoming more and more impossible.