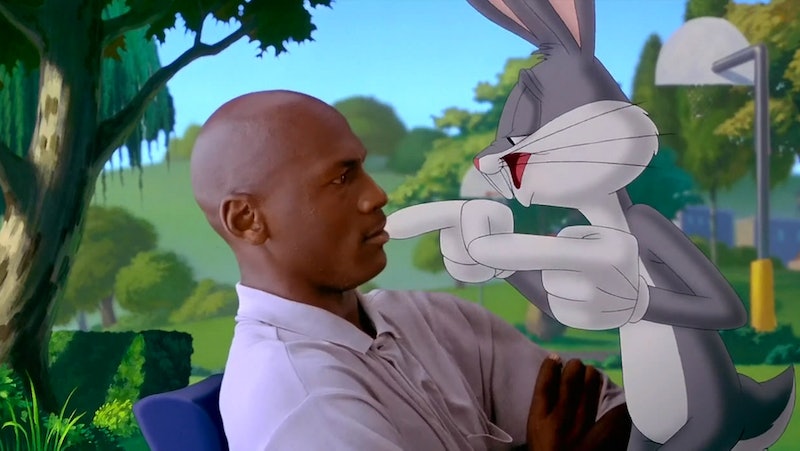 Everybody get up it’s time to slam now, because the greatest live-action/animated film to feature the Looney Tunes and basketball and Michael Jordan and aliens and the cleaning power of spit shine will be back on the big screen next month. In honor of the movie’s 20th anniversary, Space Jam will return to theaters on Nov. 13 and Nov. 16. You can check out locations and ticket information over on the Fathom Events website.

Now, you could go and watch Space Jam in theaters in the year 2016 without making a day of it. You could just go to the multiplex, buy your ticket, order some buttered popcorn and a blue raspberry Icee, watch the flick, and then go home. And that is fine. Live your truth, do you, listen to your heart, have a good time at the movies, et cetera.

Here are some ways to do just that.

Wake Up With A Bowl Of Waffle Crisp

Do you miss seeing Waffle Crisp (aka the best cereal the '90s ever gave us) in cereal aisles? Same here. But hey, at least we can order it online.

But don't let yourself get too caught up in all of the 3D goodness. You don't want to accidentally miss the movie.

Those embroidered T-shirts are the pinnacle of pocket tee fashion and I won't listen to anyone who says otherwise.

Throw An Izzy Pin On Your T-Shirt

A subtle and stylish nod to the mascot of the 1996 Summer Olympics.

Throw On A ’96 NBA Champions Cap

Throw On An Alien Necklace

Do The Macarena While You Get Ready For The Movie

Play the song and do the choreography as many times as you see fit.

McD’s adults-only burger — and yes, that really was a thing — was discontinued in 2000, but fear not: you can assemble one in your own kitchen.

Chug At Least One Can Of Surge

You want to be properly hydrated for the movie, duh.

Butterfinger BB’s are one of the '90s-est candies ever (Bart Simpson was the spokesperson, for Milhouse’s sake), but unfortunately, the Blockbuster checkout aisle staple has gone the way of the Arch Deluxe. Thank goodness for Butterfinger Bites?

Fly like an eagle all the way to your local movie house.

A merry Space Jam re-release to you and yours, you darling Monstar, you.