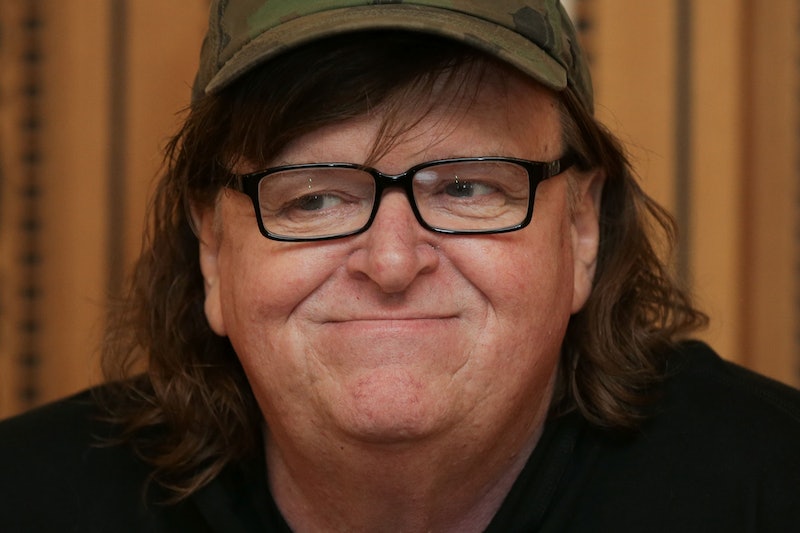 The October surprises just keep coming. First we got a tape of Donald Trump on Access Hollywood saying horrible things about women and bragging to Billy Bush about all the things that he could do with them. Then we got more of Hillary Clinton's leaked emails, which confirmed many people's belief that she is a thick-skinned politician who will do what she needs to get the job done. Now, notorious filmmaker Michael Moore is premiering a new documentary about Trump. Given the short notice, you might be wondering how to watch Michael Moore in TrumpLand.

The film's release was sudden, with Moore posting about it on Twitter only just this past Monday night. While there's not a whole lot of info about the film itself available just yet, IFC's show page hints at a gripping look at a country that has elected Trump as a major party nominee for president.

"See the film Ohio Republicans tried to shut down," the description reads. "Oscar-winner Michael Moore dives right into hostile territory with his daring and hilarious one-man show, deep in the heart of TrumpLand in the weeks before the 2016 election."

According to The Hollywood Reporter, Moore claimed that the Ohio theater where he originally planned to do the show banned him because he was too controversial. But The Columbus Dispatch reported that officials from the Midlands theater denied that was the reason they declined to let him perform there. He eventually found another theater for the performance.

The film doesn't have a wide release just yet, but here's what we know so far about how you can see the doc.

Get Tickets At IFC In New York

For lucky New Yorkers, Moore is premiering the documentary at IFC Center at 9:30 p.m. Tuesday. He is reportedly planning to attend the screening, where doors open and free tickets will be available at 8:30 p.m. on a first-come, first-serve basis. On Wednesday, TrumpLand will start its run at IFC until Oct. 27.

Get Tickets At The Laemmle Town Center 5 In LA

The other screening of TrumpLand will take place in LA at the Laemmle Town Center 5 in Encino, according to The L.A. Times.

Purchase The Film On iTunes

According to The Los Angeles Times, the documentary will be available for purchase on iTunes on Wednesday, when the film is officially released. Since it's not out yet, there's no link, but be sure to check the iTunes Store later this week.

And if you have to wait a bit to see the doc, at least there's a final presidential debate to focus on in the meantime.