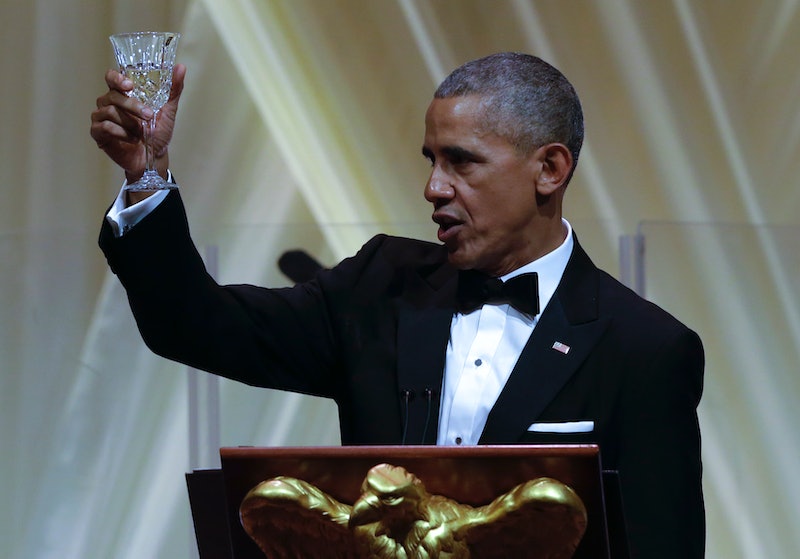 On Tuesday, President and First Lady Obama hosted what is expected to be their final state dinner, welcoming Italian Prime Minister Matteo Renzi and his wife, Angese Landini. During the prime minister's visit to the White House, the two world leaders had reportedly intended to discuss their shared support for defeating ISIS and resolving the global refugee crisis. But at night, photos from the Obamas' final state dinner showed why the First Couple will be truly missed on Pennsylvania Avenue.

For a red carpet event with an A-list guest list, the Italy state dinner seemed particularly relatable. Celebrity chef and talk show host Rachael Ray reportedly tripped on the stairs, Michelle Obama rocked a beautiful dress, and the dinner's ingredients came from the Obamas' backyard. It was an Italian-inspired celebration with a truly Obama-esque and American spin. Here's what you missed.

FLOTUS wore a fabulous rose gold dress — by Italian designer Versace, of course. Meanwhile, POTUS stepped aside to show off his beautiful wife, as well as Renzi's wife. In case it wasn't clear already, the Obamas are #relationshipgoals.

Tuesday's state dinner proved that no flowers are too bright for an official presidential event.

While soldiers with the Italian colors stood at attention, little Italian flags were waved around the gates of the White House.

The Italian community showed up in full force to welcome Renzi and his wife at the day's arrival ceremony and the state dinner. At the same time, Democratic Rep. Gerry Connolly welcomed the Italian delegation by promising to use the "Italian" pronunciation of his name.

Musician Frank Ocean reportedly showed up in checkered Vans shoes. What's more, chef Ray joked that she should have worn sneakers to the dinner, according to The Tribune.

Last but not least, the menu featured Italian favorites prepared by guest chef Mario Batali. Many of the ingredients reportedly came from the first lady's White House Kitchen Garden. Mrs. Obama recently showed off the new upgrades that have been made to the garden, including a grander entryway and seating areas.

All in all, the Obamas' final state dinner was a show of Italian and American pride. Its relatable touches made it the perfect send-off for the First Couple. Not to mention it was a great excuse to not think about the election to determine the next president for a fleeting moment.