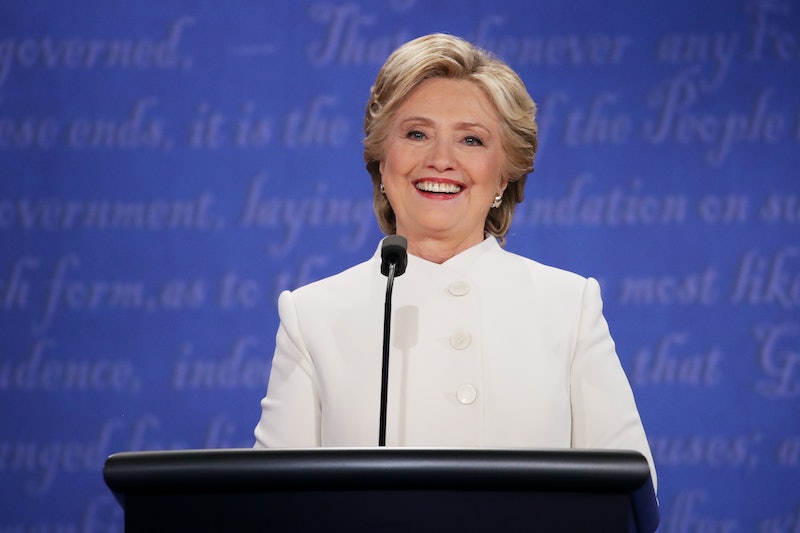 Listen up, people. Oct. 22 is being declared National Pantsuit Day — and you're going to want to celebrate. According to NPD's official website, it's going to be a one-of-a-kind event in which people of all ages will gather at Foley Square in Lower Manhattan and in other cities across the United States, wearing their best "'90s-fabulous thrift-store ladies’ pantsuits," and march in "an unmistakable visual declaration of solidarity to ignite a glorious snowball of support for Hillary [Clinton] across America." More to the point, National Pantsuit Day is a celebration of feminist success, especially in light of the historical and political milestones being reached this year across the United States. While this presidential election has seen more than its share of negative moments, it's also seen issues such as equality, equity, and divorce come to the surface — and that's pretty exciting.

"As much as this Donald Trump campaign has been terrible, it's also had this response that has been incredible in a lot of ways," National Pantsuit Day publicist Lauren Stephenson tells Bustle. Stephenson is one of four brains behind the idea of National Pantsuit Day, and played a major part in putting NPD together in only three weeks. Stephenson emphasizes that, despite the negativity that has spread during the 2016 election cycle, it has also created a respectful, open dialogue about subjects like sexual abuse, immigration, and being a minority. "It should be about unification and not just focusing on all the ways that we're different or why we hate each other," Stephenson says.

The purpose of the event is to celebrate this unity, and honor the achievements of women throughout history who contributed to getting us to where we are today in the political arena, and in general. "I think it is a blessing but also a curse that so much of this generation of females really doesn't realize how close they are, chronologically, to not being able to vote. That was just around 100 years ago," Stephenson says. We've heard many times before how today's youth should be more informed about feminist history, but it is a subject that has been and continues to be widely overlooked in our education system. "I think it's really important to acknowledge how far we've come and not take it for granted," Stephenson says, which is exactly what National Pantsuit Day is looking to do.

The pantsuit itself is a huge symbol of equality for Stephenson and the other founders of National Pantsuit Day. According to Stephenson, the original purpose of the pantsuit was to create a silhouette for women that made them appear equal to their male counterparts. "The fact that Hillary Clinton was the first First Lady to wear pants in her official White House portrait was actually a massive statement, at least as far as fashion history goes," Stephenson says. "It was only in 1993 that women were officially allowed to wear pants on the floor of the Senate."

A "bold and sort of dorky" idea, the pantsuit is meant to represent Clinton, her achievements, and the feminist movement for NPD. "There's something really eloquent about being able to make a statement visually and through fashion," says Stephenson. "It's unifying, without having to get into all the various nuances of everyone's position, and it's a vote for equality, in my opinion."

Not only will the march take place across the Brooklyn Bridge and past Hillary Clinton's headquarters, but it will end at Hill Country (a fun coincidence), where an incredible pantsuit after-party will take place. The march will also be led by the Bon Temps Brass band, creating a lighthearted, celebratory atmosphere for everyone in attendance.

NPD will also be donating pantsuits to Dress for Success, and it is encouraging participants to do the same (signs and a high level of enthusiasm are also encouraged). Thanks to a partnership with Daybreaker — a socially-minded organization focused on creating global movements through dance parties — NPD has gone from being an NYC event to a national movement.

If you can't make it to the event in Manhattan (or in Dallas, San Francisco, Los Angeles, Detroit, or Philidelphia), you can still participate online. Dress up in your best pantsuit this Saturday, and post pictures online with #NationalPantsuitDay to spread the word about this inspiring movement.

Show your support this Saturday, and rock your favorite pantsuit. You might even look as great as Hillary.