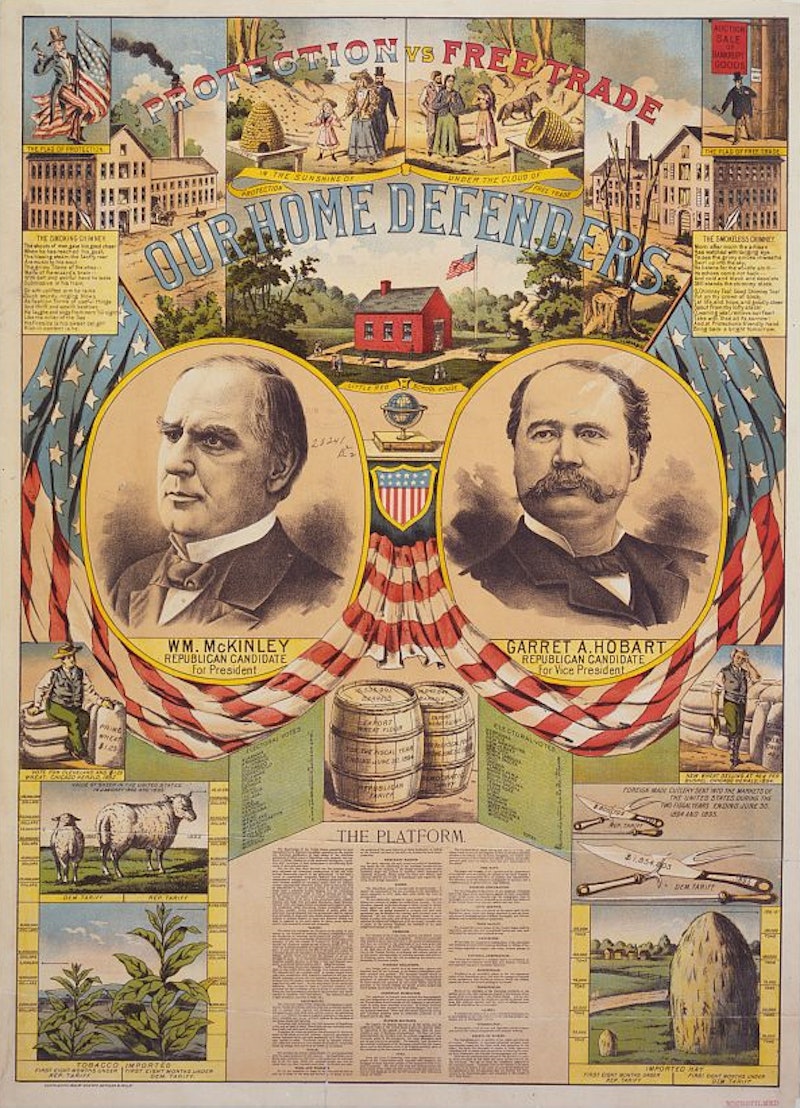 The American presidential campaign of 2016 is, fortunately for everybody, nearly over. I don't know about you, but I'm not sure how many more sexual assault allegations, "nasty woman" mumbles, and associated other scandals I can actually take before retreating to a remote forest and refusing to look at a newspaper for a year. But, as we reach the end of the (very) long road that leads to the White House, it's intriguing to look back on the battle of Trump and Clinton in the context of the history of presidential campaigns. This presidential campaign has been unique for several reasons, but in others, it's actually been pretty par for the course, and those parts may surprise you. Presidential campaigns have changed massively in some areas; in others, you'd feel just as at home in the 1800s as you do watching Clinton and Trump duke it out in a debate.

There are significant arguments to be made about the influence of television (and, before that, radio) on the ways in which presidential campaigns were run; but the real shifts in the run to the White House are actually more fundamental than that. America has shifted from a country where candidates were supposed to stay home and shut up — to one where their appearance, in minute detail, is the focus of the campaign, and must be on-point at all times. In that grand spectrum, the appearance of television was just another notch in the movement toward a candidate-centric campaign. Yes, I know the idea of somebody campaigning for the presidency without kissing a single bewildered baby seems completely alien.

Our expectations for presidents, how they behaved and sought power, and what they were allowed to do to get it have, in some ways, turned 180 degrees from the first democratic elections in 1788. (George Washington was elected unanimously. If that could ever happen nowadays, we'd all be concerned the country had had a stroke.) Here's how campaigning for the presidency has changed over the course of America's history.

The most astonishing contrast between today's election cycle and that of the 19th century is likely the appearance of the candidates. Or not. Presidential candidates, as Smithsonian Magazine explains, "did not kiss babies, ride in parades or shake hands. Nor did they even make stump speeches." All the accouterments of the modern campaign around the candidates themselves were absent. Instead, they stayed at home.

The reason? Actually stepping up to the podium yourself to make your case was seen as, well, immodest, and uncouth. The presidency was meant to be a job you were asked to do, sometimes at your own inconvenience; it was a sign that you weren't power-hungry. "It was though unseemly for presidential candidates to tour the nation and campaign," as Commonwealth magazine puts it. The history of the early presidential campaign and many of the winners' speeches are modeled on the idea of a person who becomes president out of duty and the desire of the people, not because they've been out kissing babies.

If there's one thing that distinguishes the political campaigns of today's presidency fights, it's the omnipresence of the candidate. They're expected to be everywhere, making tracks across the country, being photographed in key states, giving speeches, and smiling at children. Hence the now-infamous photograph of Clinton and Trump's private campaign planes passing one another at an airport as they went to different states on the campaign trail. It's grueling and physically exhausting, but we demand the candidates, in person, to convince us of their worth.

Part of the emphasis on the modesty and innocence of candidates in the early days of presidential campaigning was that they weren't supposed to do any fighting on their own behalf. It was all performed via surrogates. While candidates stayed home, quietly and without press interruption, their "campaign team" unleashed their full furore on the populace. "Promoting oneself was not respected," notes the Our White House campaign, "and publicly criticizing an opponent was completely unacceptable"; but if it was in the hands of supporters instead of the men themselves, anything went. This also had the advantage that, if somebody went too far or attracted public rancor, the candidate could recuse himself of all responsibility (even if he'd been directing things from the sidelines).

Surrogates maintain an important part of the candidate race today: Spokespeople for both the Clinton and Trump campaigns are fixtures on political television and radio, explaining positions, defending remarks, and occasionally getting caught up in their own individual scandals (like Paul Manafort, who had to resign from the Trump campaign after reports of ties to Russia and other awkwardness). But their position is very much as auxiliaries, not primary mouthpieces. Our new emphasis on the candidates' voices means that their supporters are there to bolster them, not do the work for them, at least visibly.

It may astonish those of us who are used to an ever-increasing election cycle (soon people will begin to campaign for the next presidency before the last one's been decided yet), but the early campaigns were actually pretty truncated. Most of this was because of the process of decision-making. As the New York Times reported in its investigation of the expansion of the presidential cycle, the earliest elections involved Congress appointing nominees rather than the involvement of the populace. Then it became more of a matter for conventions; and as the popular vote also became involved in the mid-20th century, primaries became a necessary part of the structure, which obviously expanded the whole to include more and more time. The more people got involved, the further back it stretched.

Alec McGillis, reporting for Slate back in the fresh, innocent days of 2015 (before there was talk of walls, or Mexican rapists, or sexual assault), explained that one of the reasons that the modern presidential campaigns are expanding so telescopically is money. The incredible expense of a presidential run these days continues to rise, from maintaining staff to running ads to coordinating rallies, and the time needed to raise that amount of money is also therefore increasing. Presidential candidates need to start talking to donors early to get their funding, preferably before they give it to anybody else. This is the longest campaign ever run in American history, but they're not likely to be getting shorter anytime soon.

In lighter news, the emergence of badges and buttons declaring your political preference in an electoral race is actually pretty old-school. They date, according to Time, back to Abraham Lincoln's election in 1861, in which his supporters wore a picture of the famous visage made out of tin or enamel; but they really became popular after 1869, when mass production became easily possible, and vast numbers were available to hand out. (People present at Washington's inauguration in 1789 had to make do with bronze brooches of his initials or "Long Live the President.") This wasn't the limit to presidential swag, either; before buttons were invented, there are records that the presidential election fight between John Quincy Adams and Andrew Jackson in 1828 involved swag as diverse as mirrors, sewing boxes, and ceramic tiles.

Nowadays: Swag Out The Ears

It's easier these days to find an item of clothing or merchandise that hasn't been made into some kind of slogan-carrying presidential vehicle. From T-shirts to caps, foam hands to pens (Hillary's site even has a homewares section, featuring packs of cards, mugs, and a fancy embossed notebook reading Madam President which, I'm not going to lie, I kind of want), it's open season.

Trump loves to rail against the "biased press," so it's a good thing he wasn't running for election in the 19th century. The explicit partisanship of the press during much of the history of presidential elections was, in its own way, staggering. Journalism was not, at the time, meant to be objective: The press was "bound to party," and was all about undermining its opponents, digging up dirt, and glorifying its chosen candidate. Newspapers wore their preferences on their sleeves. The main difference between then and now, it seems, is that there's much more of an emphasis on an attempt at objectivity; papers and outlets that strive for a neutral position do exist, and most places at least attempt to conceal an agenda (though, of course, many don't succeed). Whether this is more or less preferable is personal opinion.

The difference between the partisan press days and now is most evocatively shown by the fact that several media outlets and magazines have "come out" in support of Hillary Clinton over Donald Trump and made headlines by doing so. Endorsements from previously Republican-leaning papers and strongly non-partisan papers are making history in 2016, and showing something extremely interesting: While we think we might be able to guarantee a paper's endorsement, the existence of papers that strive to be neutral and the occasional surprising candidate can in fact turn things on their head. In the old days, that'd be pretty unthinkable.

If you think the lack of the actual presidential candidates on the campaign trail in the early days of election runs meant everything was more decorous, you're dead wrong. American political presidential surrogates cooked up some of the dirtiest smear campaigns in history. PBS has a list of some of the most egregious. In the 1800 election, for example, John Adams supporters called Thomas Jefferson "a mean-spirited, low-lived fellow, the son of a half-breed Indian squaw, sired by a Virginia mulatto father," while Jefferson's lot called Adams "a hideous hermaphroditical character." One 1856 candidate, Colonel John C. Fremont, faced a smear campaign alleging he was secretly Catholic. The Saturday Evening Post adds other examples: Andrew Jackson was meant to be "the son of a prostitute and a black man," while Grover Cleveland was alleged to have an illegitimate child in Buffalo, leading to the slogan among his political opponents: "Ma, ma, where's my pa? Gone to the White House, ha, ha, ha!"

This has been a dirty, astonishingly personal election, but in the context of political campaigning for the presidential office in American history, it's actually not all that unusual. Both sides have thrown enough dirt to make a mountain, and the discovery of secrets is fair game for journalists, from Trump's tax returns (or lack thereof) to Clinton's emails. It may not comfort you to know that it's never been more polite, but it's the truth.