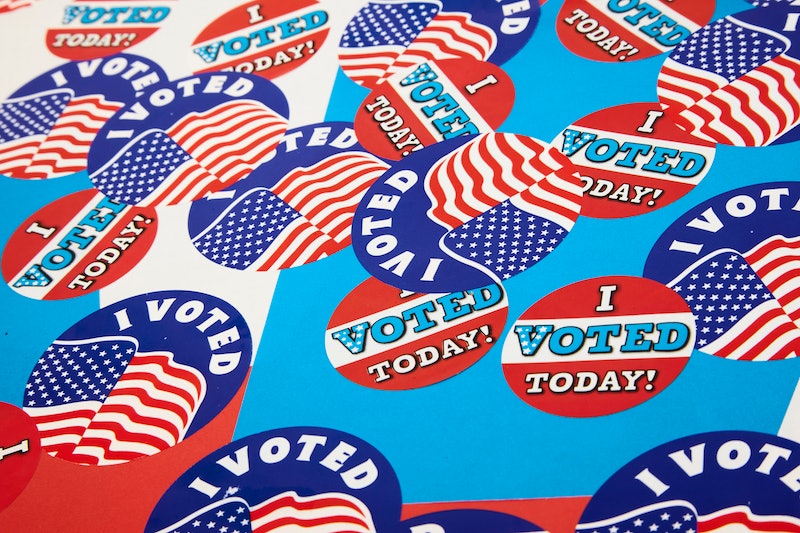 As we inch closer to the conclusion of a rather spectacular election cycle, Americans are beginning to solidify their choices for the next President of the United States. Although most will vote for a major party candidate, some dissatisfied voters are turning to writing in their decision — which brings up an interesting question: Who has received the most write-in votes for president in history? 2016 isn't the first time the public has been interested in choices beyond the ballot — and in fact, it hasn't actually been that long since the last major write-in campaign.

Write-ins often serve as a source of hilarity once the votes have been tallied; rather than choosing from the names on the ballot, disappointed Americans have voted for candidates ranging from Leslie Knope to "my cat Ginger." In 2012, one particularly inspired citizen wrote in Neil deGrass Tyson as their pick for president and Bill Nye as vice president. That being said, write-ins can be meant seriously, even if their chances of actual election are slim to none; what's more, it looks like a substantial number of Americans are considering choosing their own candidate in the upcoming election on Nov. 8. According to CNN, Google searches for "write in" skyrocketed last week by more than 2,800 percent — the highest it's been since George W. Bush ran against John Kerry in 2004.

So who has managed to garner write-in votes despite not actually appearing on the ballot? Unfortunately, there's no way to tell for sure; as the Federal Election Committee points out, some states don't disclose the names of the write-in candidates. However, the most likely answer probably won't surprise you: In all probability, it's famous independent politician Ralph Nader during the 1996 election.

In 1996, four years after Nader ran a write-in presidential campaign, the then-fledgling Green Party nominated Nader as their presidential candidate, running against Bill Clinton and Bob Dole. Nader initially accepted the nomination, but he later declined and went back to running his own independent campaign. He only made it onto the ballot in 22 states, but he ultimately received more than 685,000 popular votes. In subsequent elections, Nader became the official Green Party nominee, but he still frequently relies on write-in registration in states where he doesn't appear on the ballot.

Conservative politician Ron Paul is another popular write-in candidate. According to his own website, he received just over 17,000 write-in votes in California in 2008. In 2012, many speculated that Paul siphoned away some of Republican presidential nominee Mitt Romney's vote, either by causing disenfranchised voters to stay home or possibly by writing in a vote for Paul.

Then there's the true American hero who has appeared in presidential elections for decades: Mickey Mouse. Seriously — the first vote for the famous cartoon mouse was cast in the New York mayoral race in 1932, and he's been a figure in American elections ever since. Now that's a politician we can all get behind.

More like this
How To Fight For Reproductive Rights, Based On How Much Time You Have
By Courtney Young
How To Protect Your Digital Privacy If You Need An Abortion Post-Roe
By Kaitlyn Wylde
34 Quotes That'll Inspire You On Juneteenth & Beyond
By Syeda Khaula Saad and Siena Gagliano
Juneteenth Is Now A Federal Holiday — Here's What That Means
By Lani Seelinger and Syeda Khaula Saad
Get Even More From Bustle — Sign Up For The Newsletter