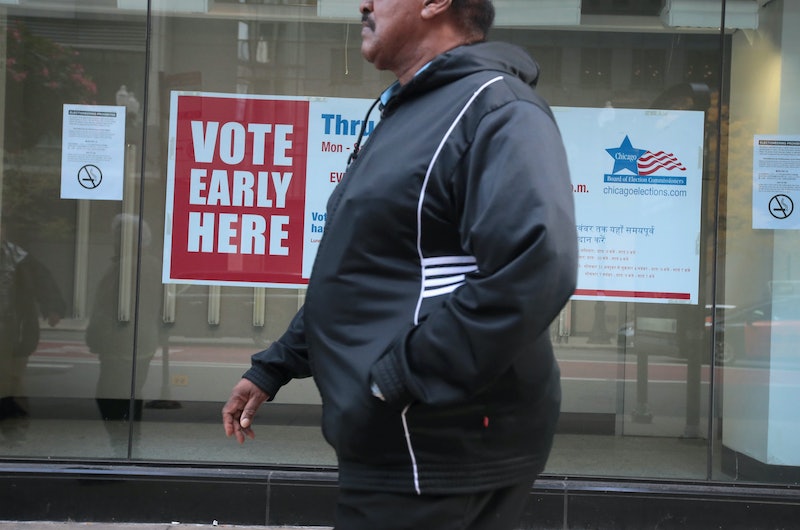 The number that always gets thrown around about the legal age to vote is 18, so you'd be forgiven for assuming that you aren't eligible to cast your ballot on Nov. 8 unless you've reached that age. But, in the interest of due diligence, here's a crazy question — can you vote if you're 17? It turns out that, in some areas, the answer is yes. As with most things that involve voter registration, you need to get informed about the rules in your state.

Unfortunately, no rule applies universally, but the general rule of thumb is that, while you can register to vote before you turn 18, your 18th birthday must fall on or before Nov. 8 in order for you to actually step into a voting booth on Election Day. However, in some specific states, there are loopholes to registry that result in 17-year-olds being allowed to vote — depending on what they want to vote for and if certain conditions are met.

These states include Connecticut, Hawaii, Illinois, Maine, Virginia, Washington, West Virginia, all of which have some variation of a rule allowing a 17-year old to vote in a primary or caucus, as long as they'll be 18 by the next general election. So you definitely want to be sure to check if your state will let you vote in the next primary or caucaus. But, before we go any further, I should reiterate that, if you won't be on or 18 before Nov. 8, you cannot cast your vote for our next President, even if you live in one of the states I mentioned. These rules for 17-year-old voters apply only to primaries and special elections, not to their right to vote in general elections or midterms.

In the meantime, there are some further exceptions. According to the website USA.gov , in Illinois, Maine, and West Virginia, a 17-year-old can vote in the General Primary, as long as that individual will be 18 by the following General Election. In Virginia, that privilege is specifically extended to Special Elections as well.

If you're in one of those areas, congratulations, you got to make your voice heard a little earlier than most of your peers (or will next time around if you didn't make the cut for 2016). And, with an election as historic as this one on the line, who wouldn't want to take advantage of that?