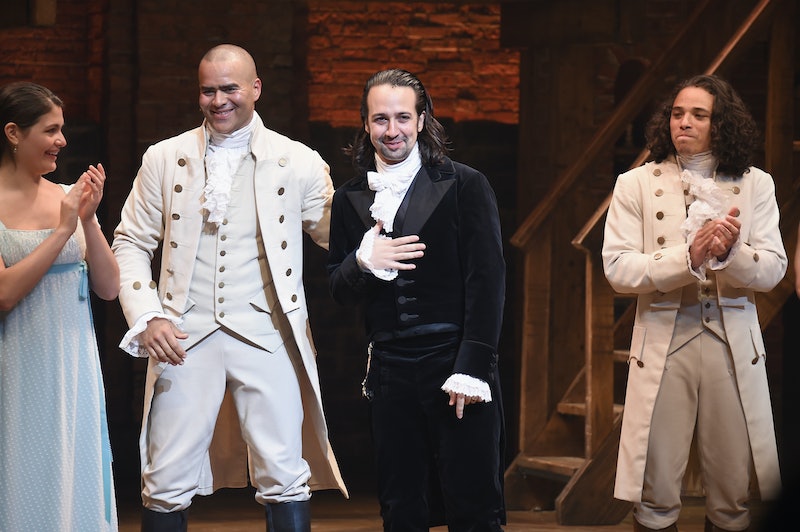 This October, I had the privilege of seeing the highly acclaimed musical Hamilton. And make no mistake, Lin-Manuel Miranda's intriguing concept of using hip-hop as a medium to recount the life of founding father Alexander Hamilton was an entertaining spectacle to behold. The rebellious and contemporary tone of the musical, channeled through fast moving rap and hip-hop, created a novel lens from which to consider the history of the United States. But as I was watching the musical, I was struck by the amount of patriotism that was extolled in the show, and yes, I couldn't help associating Hamilton with the 2016 presidential election.

I didn't think this because we are in a moment of particularly praise-worthy patriotism, but because we are at a crossroads in history. After seeing Hamilton, a musical that Miranda said he was inspired to write after reading Ron Chernow's 800-page biography on Hamilton, I thought about the distinction between today's leading politicians and those from the Revolutionary era. The history books have chronicled 1776 as a time of virtue and extreme dedication for a new country founded on ideals of democracy. Some 240 years later, these values are being brought into question.

The big questions: Are we as a nation functioning on the premise that "all men are created equal?" And under the belief that there should be transparency, freedom of speech, freedom of the press, and a clear separation of powers? It's obvious that when that U.S. Constitution and the Declaration of Independence were written, this nation was already steeped in racism, hypocrisy, and harsh inequalities. (Hamilton opposed slavery, as was addressed in the musical, though he did marry into the Schuyler family, an extremely wealthy, slave-owning family.)

Still, the founding fathers worked to instill a political discourse based on democratic values and ideals. And many of those ideals, which were extolled in the musical, seem to be largely absent from much of today's political discussions. The first two presidential debates were largely filled with vicious ad hominem attacks, which prevented more serious discussion regarding policy to commence.

There was an underlying commitment shared between the founding fathers to create and maintain a country that was governed with principles of justice and a clear separation of powers.

But in the political climate of the 2016 election, the guiding governing principles we take for granted seem to be at stake. In a campaign where Republican presidential candidate Donald Trump has used hate speech, fear mongering, bigotry, and demagoguery, along with an aversion to accuracy and preparedness as the foundation for his campaign, it becomes difficult to comprehend why so many people would be able to support him, or mistake his affront on democratic values for patriotism.

One of Trump's lead spokespeople, Katrina Pierson, had no problem openly talking about discriminating against Muslims in a CNN interview, brazenly saying in response to a question about Trump's proposed ban on Muslims entering the country, "So what? They're Muslim." And Trump had no qualms saying that a protestor who was exercising his freedom of speech during a Trump rally, should have perhaps been "roughed up." This same candidate was unable to recall or denounce former KKK and white supremacist leader David Duke, when pressed about it during interviews. Those are serious actions that reveal a dismissal of democratic principle.

And maybe that's one of the reasons President Obama and First Lady Michelle Obama praised the musical. "We all laughed, but who's laughing now?" Obama said during a videotaped tribute to the musical that was shown during the Tony award ceremony, calling the musical is "a civics lesson our kids can't get enough of." And it's a lesson that many of our leading politicians and political candidates could use a refresher course in.

With regard to the Clinton's campaign, there is also a dangerous item that needs to be addressed as we head into the presidential election. Has the Clinton Foundation and will the Clinton Global Initiative violate the concepts of separation between corporate interest and government?

The revelations regarding donors who have given money to the Clinton nonprofit organization reveal a dangerous potential for conflicts in interest. As reported by USA Today, it appears that several companies lobbied for corporate interest during Clinton's tenure as Secretary of state in addition to pledging millions to the non-profit foundation. A clear separation between corporate interest and governance, a guiding principle in our country's formation, is a legitimate concern, and one that needs to be addressed.

After the rough tumble, hurly burly of the debates, which were dubbed as some of the ugliest debates of modern presidential history, we need something from the presidential candidates that would allow the American people to have faith in the preservation of justice, liberty, and democracy. Ethics that were praised time and again in Hamilton, which should serve as a reminder to the founding ethics of this country.

As we head into the final stages of this presidential election, here's a quote from Hamilton. Let's "raise a glass to freedom, something they can never take away." Democratic virtues are part of those freedoms that need to be demanded of our candidates. So let's raise our glass, as Nov. 8 looms ever near.