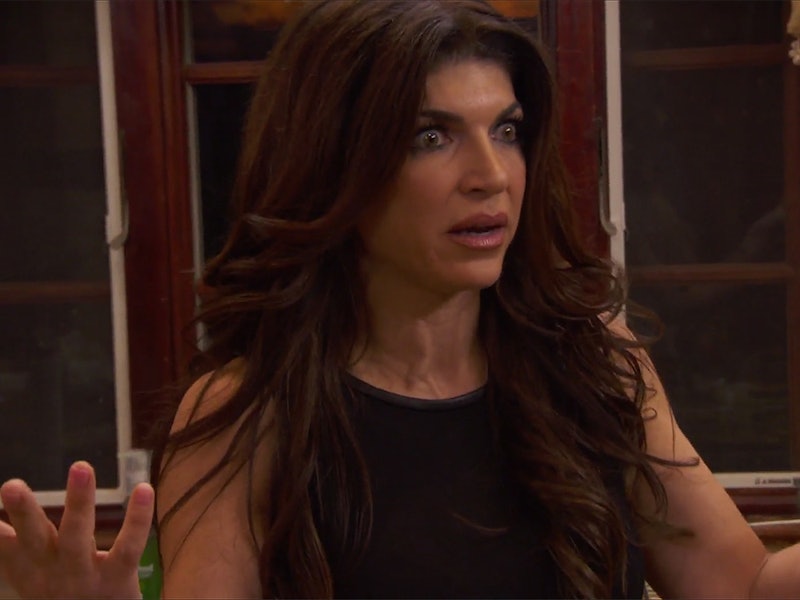 There have been plenty of shocking Real Housewives moments, but this may be the most shocking one yet. Real Housewives of New Jersey stars Teresa Giudice and Daniell Staub reunited and have apparently put their contentious past behind them. Let me allow this news to sink in for a moment.

On Wednesday, Giudice shared a photo of the two doing yoga together on Twitter and wrote alongside it, "Loved catching up & bonding this am with @daniellestaub at JZT Dance & Yoga .. #RHONJ #OG'S #NAMASTE." At least they weren't near any tables during their catch-up session, right?

Who knows what the catalyst was behind their reunion, but it sure seems like they want to forget about the past and move forward in a more positive direction. Staub clearly feels the same as Giudice, as she responded to the current RHONJ star's tweet, "It was so nice seeing you, just like old times.... great talk we had over Jamba Juice! #rhonj #yoga #friends."

Who would have ever thought that after Giudice's unforgettable table flip, her calling Staub a "prostitution whore," their fight at the Posche fashion show, and the time Giudice got in Staub's face at the Season 2 reunion, these two would be able to be in the same room ever again. It just goes to show you anything can happen in the Bravo world.

The photo has caused shockwaves across Twitter and the Housewives universe. I'm not exaggerating. Even Andy Cohen commented on the picture with one single word, "WOWZA." Staub replied to him, "#love&light." One of Giudice's followers also wrote her, "Oh my! How times have changed," and she replied, "Yes they have [three heart emojis]."

Let's face it, this photo is more shocking and so much better than anything that's happened in the current Season 7 of RHONJ. Anyone else sick of Giudice and Jacqueline Laurita fighting? Speaking of Laurita, I can only imagine what she thinks of this photo, especially since she has a long and heated history with Staub.

Can you imagine if Staub came back to RHONJ? Now that would make an interesting and entertaining season. It would also bring the series back to its Season 1 and 2 roots, where I couldn't wait to tune in. Keep those fingers crossed that this is where all of this is heading.