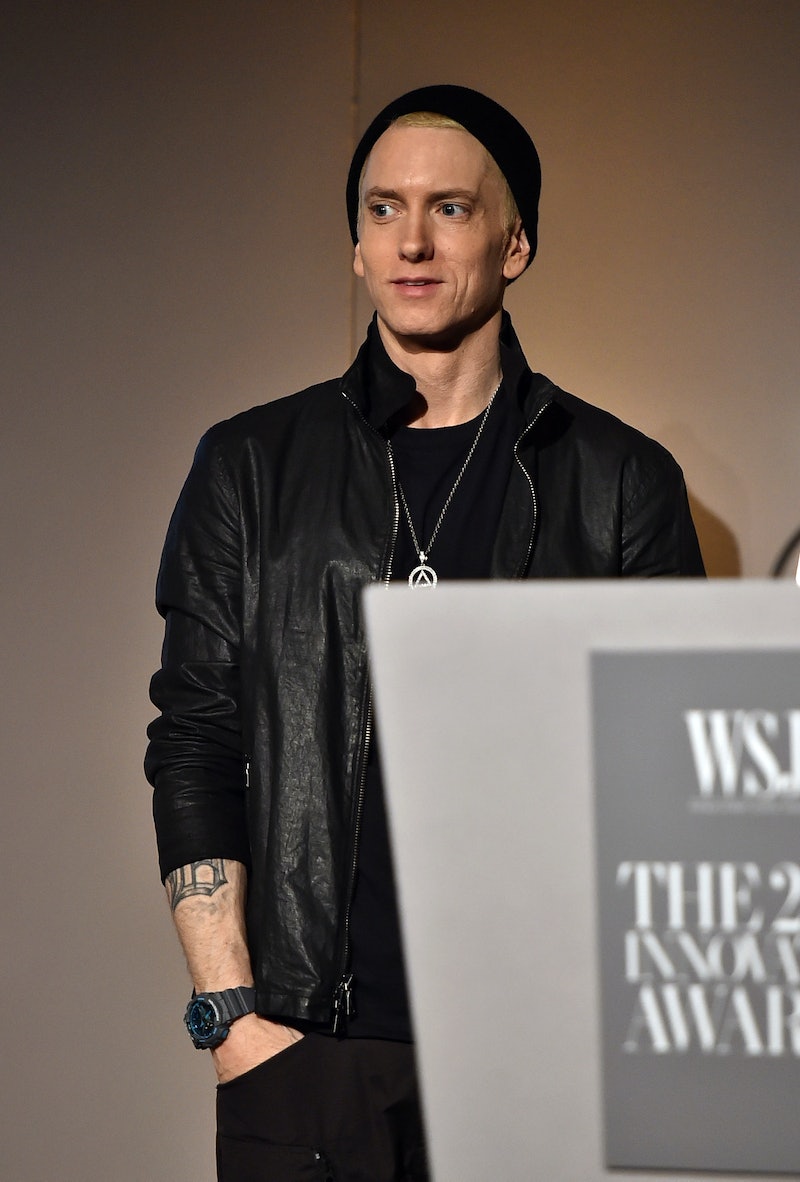 It's been a long while since any new Eminem music has come out, but the rapper was apparently inspired enough by the 2016 presidential election to break his silence. On Wednesday, Eminem dropped "Campaign Speech," which includes a Donald Trump-inspired diss of sorts, on Twitter. The sparse freestyle, which is nearly eight minutes long, is full of scathing references to the Republican presidential nominee, pop culture, and current events. Ignoring the lyrics for a moment — which, as a warning, are quite violent — the song is a major return that indicates more is to come from Marshall Mathers. Not only did he release the track, but Eminem also announced a new album is on the way. He tweeted reassuringly, "Don't worry I'm working on an album!" Fans have been worrying: The 44-year-old rapper hasn't released an album since The Marshall Mathers LP 2 in 2013.

That doesn't mean he hasn't been busy lately. Eminem produced music on his label Shady Records and released a complete box set of his work. He also branched out into the movie and TV business when he executive produced the soundtrack of the boxing film Southpaw, executive produced the TV series Motor City, and contributed a song to the Suicide Squad soundtrack. However, it has been a while since there's been a new album and Eminem's announcement is a very welcome surprise for his fans.

As for the new track, "Campaign Speech" doesn't directly mention Trump until around halfway through (you can listen to Eminem's song for yourself here). Instead, like most of his music, the freestyle sets the narrator up as a kind of dangerous, off-the-handle super villain. He describes himself as "born with the endorphins of a pathetic orphan" and "a predator, I'm headed for competitors." However, the title of the track transforms this fairly standard self-description into a dark variation on the personal origin stories that politicians give to humanize themselves, therefore establishing the premise of the track.

Eminem shifts the focus to a hypothetical presidential bid, equating his most violent self with Donald Trump and sarcastically wondering: If he can be president, why can't I? "Consider me a dangerous man/ but you should be afraid of this dang candidate," he raps, later describing Trump as a "loose cannon who's blunt with his hand on the button." Eminem's critique echoes that from those who have criticized Trump's lack of political experience, as well as The Apprentice alum's tendency to lash out in emotional outbursts.

Eminem goes onto describe the very poor decisions he could make as president himself. Later on, Eminem might be including Trump in his list of enemies when he writes of his desire to "diss you in every lyric until you fear the pen/ And never appear again."

Eminem's forthcoming album probably won't be entirely made of Trump disses, but if "Campaign Speech" is any indication, he'll be coming for blood.