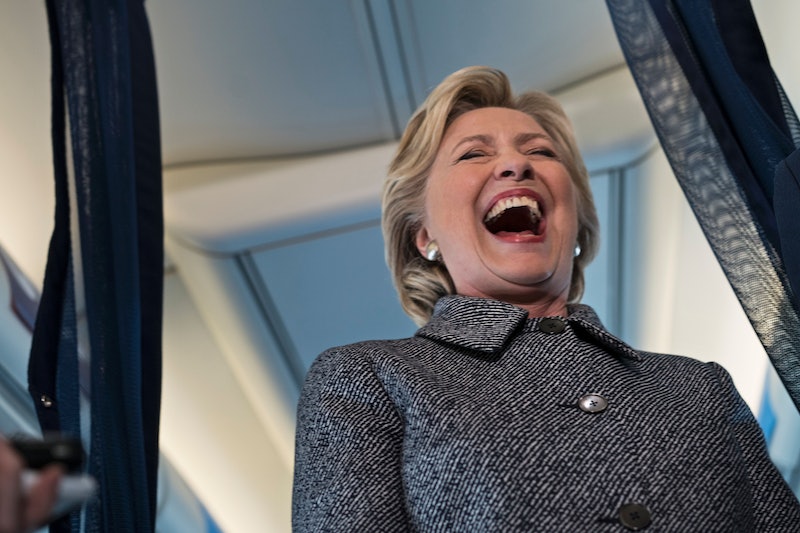 At long last, the final debate is upon us. And no one is probably happier about that fact than Hillary Clinton. Though she's admittedly breezed through the previous two debates due to Donald Trump's self-inflicted implosion, you've got to imagine that Clinton will be toasting over a scotch or two when this whole debate thing is finally over. In honor of this cherished moment, here's a roundup of the some of the great Clinton-inspired final debate memes gracing our presence online.

And truly, this whole thing has practically felt like one big run-off to a meme. From Trump's mysterious sniffles to the rise and truly awkward fall of Ken Bone, the previous two debates have been chock full with meme-able moments. And now with just a few weeks left until the election (cue a collective sigh of relief from the American public), Clinton, Trump, and the online masses have had enough debate-prep and ready-made material to deliver some truly worthy memes.

The Clinton memes and tweets floating around the internet have one thing in common in regards to this last debate: the former secretary of state is ready to take on the orange monstrosity known as Trump once and for all.

It's Totally The Stage Lighting, Right?

The Mic Drop Heard 'Round The World...

This Illustration Of Their Thought Processes Seems Pretty Accurate...

We See You, Hillary

The Madonna GIF We Didn't Know We Needed

Heels Are A Dangerous Weapon, After All

Trump's Gold Isn't Worth Much

His Words Speak For Themselves

And with that, voters can finally say "boy, bye" to these awful presidential debates. See you in 2020!