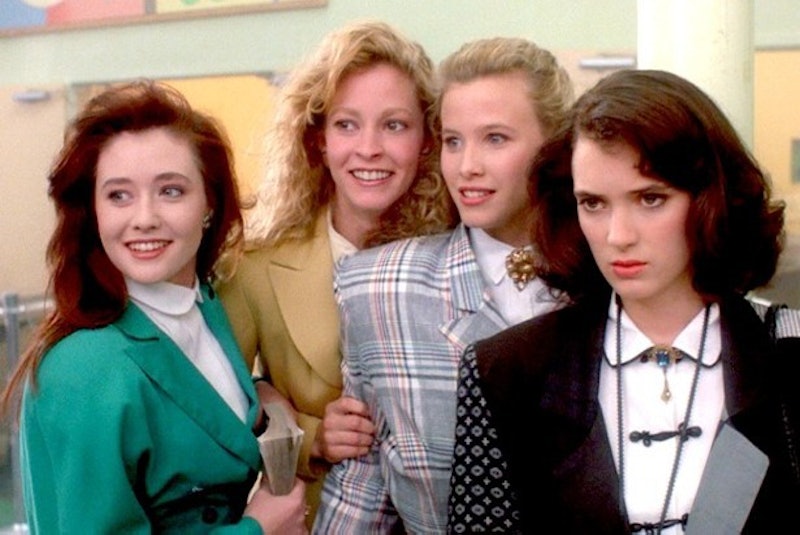 I'm a little bit of an 80's movie geek. I have a huge soft spot for anything with Molly Ringwald in it, Back to the Future is my favorite film of all time, and I dream of being serenaded with "In Your Eyes" a la Say Anything. But nothing quite gets me into full-on fangirl mode like Heathers. So, as a voracious reader, I'm always looking for books like Heathers.

Heathers should not be funny. After all, it's a film about J.D., a teenage sociopath (Christian Slater) and Veronica Sawyer, a girl who unwittingly helps him kill a bunch of their classmates (Winona Ryder), culminating in a school bombing. And yet it's one of the most wickedly witty teen movies around, gifting us with such classic lines as, "My teenage angst has a body count" and "F*ck me gently with a chainsaw." It doesn't get much better than that, people.

What makes Heathers stand out is its ability to tackle a horrifying premise (teenage murderers killing their classmates and making it look like suicides) while also being a deliciously dark and funny high school comedy. And, of course, we're gifted with the "strange and unusual" Winona Ryder in her 80's movie prime.

Obviously, nothing is quite like Heathers. But if you need a break from Christian Slater (how dare you), try checking out these seven tales of homicidal teenage mayhem.

June and Delia are best friends; or rather, they were best friends. They stopped speaking to each other after an "incident," and haven't been in contact in at least a year. But then Delia commits suicide under suspicious circumstances the same day that June receives a voicemail from her. Delia's boyfriend insists that foul play was involved, and June begins to question whether Delia actually killed herself. As she investigates Delia's death, she finds herself exploring the dark underbelly of her town, a world Delia was apparently involved in before she died... if she's really dead at all.

Sadie really shouldn't be allowed to get bored. When she gets bored, bad things tend to happen. But after getting expelled for nearly killing a classmate, she's sent back to California to live with her parents, where she has no choice but to stir up trouble to amuse herself. This isn't great news for Emerson Tate, a nice boy with a dark secret who used to be friends with Sadie, or his brother Miles, who is convinced he's having visions of some sort of future violence. Gee, that violence couldn't have anything to do with Sadie, could it?

The Basic Eight by Daniel Handler

Flannery Culp is in jail for killing a classmate (don't worry, this isn't a spoiler alert; we find this out in the very beginning). Looking back on her senior year for the sake of writing her account of the murder, we're introduced to Flannery's group of friends: the Basic Eight. From the outside, the group is cultured, sophisticated, and knows how to throw a hell of a dinner party. But obviously everything isn't quite as perfect as it seems. After all, if it was, would Flannery have killed one of her own? Take my word for it: this novel makes murder absolutely hilarious.

How To Lead A Life Of Crime by Kirsten Miller

Even J.D. wouldn't have lasted two days at the Mandel Academy, the ultra-exclusive New York school that trains its students to be top-of-the-line criminals. Drug dealers, prostitutes, murderers, thieves: this school has it all, and only the best survive their "education." Flick, a pickpocket, is hoping to learn enough to get revenge on his father, who he blames for his brother's death. But first he has to make it out of school alive, and his biggest competition of all is his old crush.

Jake isn't exactly what you'd call cool. Actually, he's a wimp, a bully magnet who's incapable of saying two words to his crush. To try to toughen up, he reaches out to his cousin Nick, who's a badass with a capitol B. In fact, maybe a little too much of a badass: he's a professional burglar who takes Jake under his wing. But Nick's crimes don't stop at theft, and now Jake has been pulled into a dark world of violence by a man who's much more dangerous than Jake could ever imagine.

The Firebug of Balrog County by David Oppegaard

It's hard to lose a parent as a teenager. However, the proper way to deal with your grief is NOT to start setting fire to your town. Mack doesn't seem to be taking that advice, however. After his mother dies from cancer, he begins giving in to his pyromaniac tendencies, using arson as an outlet for his sadness. This starts a war between him and the town mayor, who happens to be his grandfather (though he doesn't know that his nemesis is his own grandson). A darkly funny look into the world of a grieving teenage arsonist.

The Secret History by Donna Tartt

Admittedly it isn't quite as cheerfully wicked as Heathers, but it does involve some homicidal students. Richard begins attending a small college in Vermont and becomes obsessed with a group of Classics students. Determined to join their clique, he eventually earns their trust and transfers into the major. Secrets exist within the close-knit group, however, and when one member learns of a crime committed by another, he's killed to keep him quiet. This murder causes the group to crumble, as each tries to come to grips with their guilt.