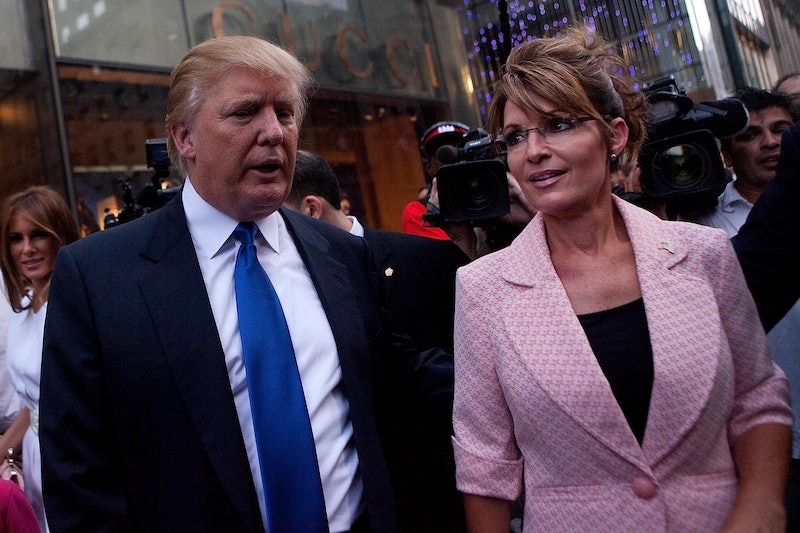 Donald Trump seems to have a thing for inviting controversial figures to be his guests at the presidential debates. Therefore, it should come as little surprise that Trump invited Sarah Palin to the final debate on Wednesday night. Politico reported that the former Alaska governor, and 2008 vice presidential candidate, will sit along with Trump's other guests at the debate tonight in Las Vegas. In fact, the other guests may make the governor-turned-reality TV-star seem pretty tame.

According to Politico, Palin will sit alongside two very controversial Trump guests: President Obama's estranged half-brother and a woman accusing Bill Clinton of sexual assault. Yup, Trump certainly likes to send a message with his choice of guests.

While Palin's presence in Trump's box may not be quite as shocking as Malik Obama's, the former governor was not necessarily the most predictable guest the GOP nominee could have picked. Palin did endorse Trump early on — before the Iowa caucuses— but she hasn't been very involved in the Trump campaign since. In fact, many were shocked when Palin didn't even attend Trump's GOP convention in July. However, Palin's support for Trump clearly shouldn't be underestimated, since the former governor made the trip down from Alaska to watch the final debate.

Not only is Palin back in the limelight tonight, but Alaska is proving to be far more prominent in this election than is typical. That's right, Alaska might go blue in 2016. Palin's state has only voted Democratic once in a previous presidential election — the year was 1964 — which is why it's rather shocking that KTUU recently reported that Trump does not have a very large lead over Democratic nominee Hillary Clinton in Alaska. Perhaps, Trump invited Palin to the debate in an attempt to drum up support in the Last Frontier?

Additionally, while Palin hasn't hit the campaign trail for Trump lately, the former Alaska governor has no qualms with campaigning for the GOP candidate on social media; Palin often attacks Clinton on Twitter, while proudly supporting Trump. Unlike so many Republican lawmakers, Palin did not terminate her endorsement for Trump after the tape of Trump joking about sexual assault was released on October 7, further distancing herself from many members of the GOP.

Undoubtably, Trump's guests at the final presidential debate make a motley crew — but considering Palin's touch-and-go relationship with the GOP, she may just fit right in.