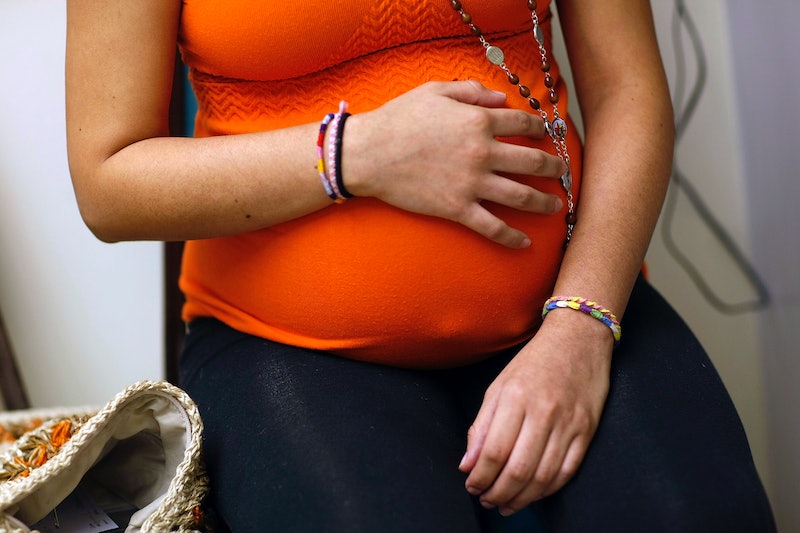 The third and final presidential debate on Wednesday night was the first so far to really focus on what is, for millions of voters, one of the most important issues of the election: reproductive rights and the standing of the Supreme Court case Roe v. Wade. When moderator Chris Wallace asked Trump and Clinton about abortion rights, Clinton was resolute.

"I strongly support Roe v. Wade," she told the audience, which was an unsurprising response from the candidate who has consistently been active for reproductive rights causes and who holds the endorsement from pro-choice groups Planned Parenthood and NARAL. Donald Trump's answer, conversely, likely left many women with more questions than answers. One such question—does Trump understand how pregnancy works?

The candidates quickly became embroiled in a discussion about so-called "partial birth abortion." That phrase is a political, rather than a medical term, and it refers to late-term interventions into a third-trimester pregnancy that are deemed necessary to protect the life of the mother or in cases in which the pregnancy is deemed too dangerous, even to the fetus in question, to continue. Late term pregnancies frequently occur in instances of wanted pregnancies and are often tragic for the family involved.

On Wednesday night, Trump seemed patently unaware of any of this:

Hillary can say that [late-term abortion] is okay, but it's not okay with me. Based on what she is saying and based on where she's going and where she's been, you can take the baby and rip the baby out of the womb. In the ninth month. On the final day. That's not acceptable.

Taking the baby out of the womb at nine months is a medical procedure, to be sure, but it's one that results in birth. That is, Trump accidentally described a Caesarean Section.

Moreover, it's an inaccurate description of Clinton's position on late-term abortion. Marco Rubio tried the same line of attack during the Republican primary; his comments were disproven by Politifact, a nonpartisan fact-checking website, which explained Clinton's stance on the issue as follows:

Clinton does not believe that all abortion should be legal. Instead, she’s said she supports restrictions on late-term abortions except in cases of rape, incest and when the mother’s life and health are in danger. That’s not the same thing as unequivocally supporting abortions "even on the due date" of the child. Such an abortion would be a purely hypothetical scenario; doctors said such a procedure doesn't make sense medically.

Before mischaracterizing his opponent's positions and possibly failing even to understand what an abortion procedure was, Trump already had a famously spotty history with reproductive rights policy. In particular, there was three-day period earlier this year during which he appeared to take five different stances on abortion in three days, including one in which he suggested that women who have abortions should be "punished."

Trump's vacillating on the issue smacks of ignorance, and this is an issue about which detailed knowledge is extremely important. As the battle for reproductive rights continues to wage across the country (and as it likely will for years to come, regardless of the outcome of this election), I would think even anti-abortion activists would agree that candidates should have a basic understanding of the procedures and biological processes they are seeking to regulate.