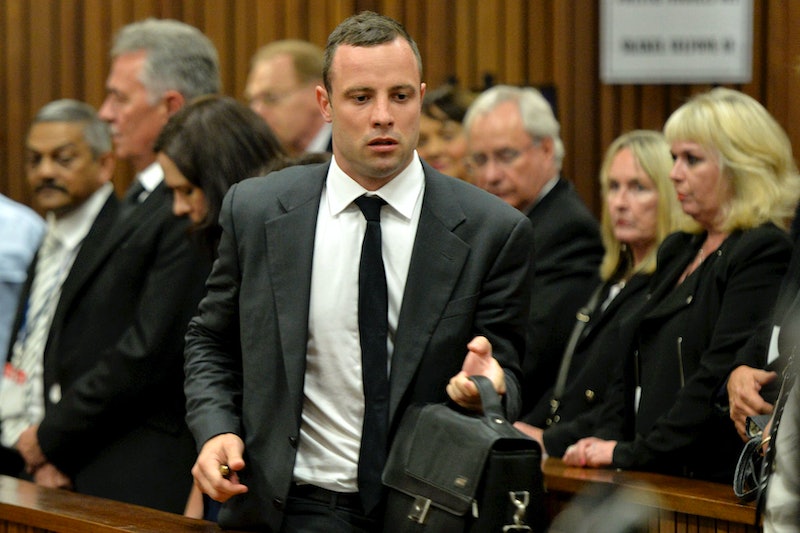 At the end of Day 15 of Oscar Pistorius's murder trial, the prosecution drew its arguments to a close. This week, the court had focused on messages from Reeva Steenkamp to Pistorius, and examined phone records from the night Steenkamp died. The court has now adjourned until Friday, when the defense will begin to call its witnesses. It's expected that one of the first of those witnesses will be Pistorius himself.

One detail in the examination of Pistorius' phone records appeared to be contradictory to the athlete's account of what happened on the night he shot Steenkamp. In his bail affidavit, Pistorius said that the couple went to bed around 10 p.m. on February 13th, and that he remained asleep until around 3 a.m., when he went out on the balcony to retrieve a fan. It was then that he heard Steenkamp making sounds in his bathroom, mistook her for an intruder, and fired four shots through the bathroom door.

However, cellphone expert Francois Moller testified that one of Pistorius's devices made a connection to the Internet at 1:48 a.m. for just over five minutes. Moller added that there's a possibility this connection could have happened automatically as emails or applications updated.

Also on Tuesday, the defense drew the court's attention toward the "90 percent" of messages between the pair that experts have testified to be "loving." Pistorius wept as the messages were read out. The court heard that the couple called each other pet names such as "Angel," "Baba" and "Boo;" that messages between the pair were peppered with kisses; and that Steenkamp was planning to cook dinner for Pistorius on Valentine's day.

In an exchange between the two on the day before Steenkamp was shot dead, Pistorius's girlfriend called him an "amazing person," and he asked her if she would like to spend the night.

Phone records from the early hours of the next day showed that he made a number of calls one after another immediately following the shooting of Steenkamp: first to a manager at his residential estate in Pretoria, then to an ambulance and his estate security. He then called a friend, his brother Carl, and finally his long-time manager Peet Van Zyl.

Police officer Adriaan Maritz, the second witness of the day, told the court that between January 2011 and April 2013 there were seven crimes committed on the residential estate where Pistorius lived. However, contrary to Pistorius's claim in his bail affidavit that he had been the victim of a crime on many occasions, Maritz said that he could not find any records indicating that Pistorius had reported or been a victim of a crime.

At the end of the day, Pistorius's senior counsel, Barry Roux, successfully sought a two-day adjournment to consult with witnesses who were previously unavailable to the defense because they were on the prosecution's list. Among these witnesses could be Steenkamp's best friend Gina Myers, who was present in court for the first time Tuesday.