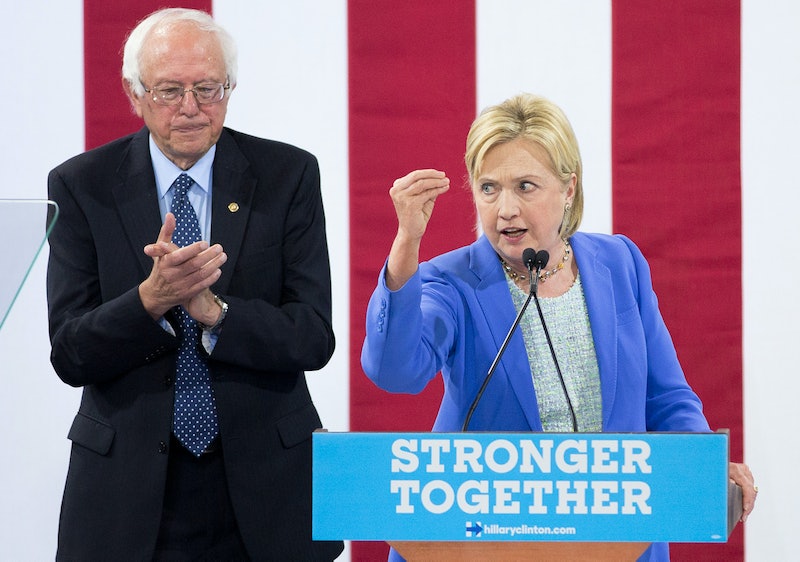 Donald Trump may be attempting to court Bernie Sanders' supporters, but at the debate on Wednesday night, Hillary Clinton was clear she's invested in Sanders' supporters, too. Clinton reiterated many of Sanders' economic policies at the debate saying, "I want more technical education in high schools and in community colleges, real apprenticeships to a prepare young people for the jobs of the future. I want to make college debt-free and for families making less than a hundred twenty five thousand dollars... Most of the gains in the last year since the great recession have gone to the very top. So we are going to have the wealthy pay their fair share."

It's no surprise that Clinton is making such a blatant appeal to Sanders' supporters at the final presidential debate — Forbes recently reported that only 55 percent of Sanders' supporters are planning to vote for Clinton on November 8. Even though CNN reported that going into the final debate Clinton leads Trump by nine points, the former Secretary of State certainly wants to win over the remainder of Sanders' base — and Sanders has made it clear that he wants his voters to back Clinton, too.

Therefore, it's no wonder that Clinton has mentioned many of Sanders' core issues during the Wednesday night debate. NPR reported that just like her former Democratic opponent, Clinton made it clear that she too wants to make college affordable for all, and of course, heavily tax wealthy Americans.

Clinton didn't only make an appeal to Sanders' supporters when discussing the economy, she also made it clear that she has the support of Sanders himself when The Donald brought up the Vermont Senator. During the debate on Wednesday night, Trump told Clinton, "Bernie Sanders said that you have bad judgment. I agree." Well, Clinton had quite the comeback: "You should ask Bernie Sanders who he is supporting for president." Clinton added to her argument, reminding the audience that Sanders called Trump the most "dangerous person to run for president in the modern history of America," and agreed saying, "I think he's right."

Finally, Clinton made a nod to Sanders in her closing statements: again she spoke about the importance of affordable education for all. Now it's time to wait and see if Sanders' supporters are convinced by Clinton, and if any of the Vermont Senator's constituency really does vote for the GOP candidate in November.