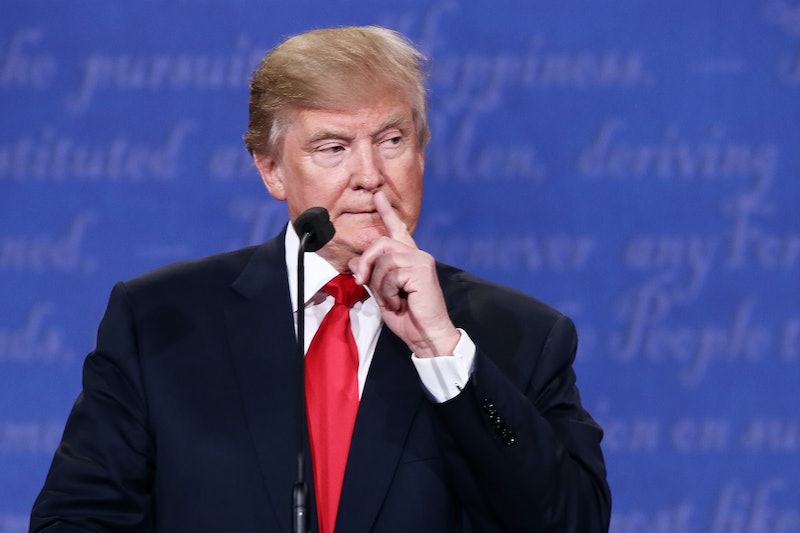 To cap off what was almost inarguably an unpredictable election season, Hillary Clinton and Donald Trump faced off in Las Vegas for the third and final presidential debate this year. Wednesday night's debate, unsurprisingly, was every bit as contentious as the two that preceded it. Moderator Chris Wallace led the candidates through questioning about six broad topics, including immigration, the Supreme Court, and fitness for president, though he occasionally allowed digressions into the minute specifics of other policy, including late-term abortion and Trump's apparent unwillingness to agree to accept the results of the election. But one of the most interesting parts came at the end, when Trump gave a closing statement.

At the end of the debate, Wallace explained that the candidates had not been told to prepare closing statements, but asked them to speak from the heart and deliver one anyway. Clinton gave polished closing remarks in which she called for Americans to come together after the election, saying "we need everybody to help make our country what it should be." It was a noticeable shift from her performance during the rest of the debate, during which she freely and frequently brought the conversation back to a criticism of Trump.

Trump's remarks, conversely, seemed somewhat less rehearsed. He praised his campaign and recited his ubiquitous "Make America Great Again" slogan, then pivoted to an apparent plea to voters of color, ultimately concluding with a warning that a President Clinton would be tantamount to four more years of Barack Obama.

She's raising the money from the people she wants to control. It doesn't work that way. When I started this campaign, I started it very strongly. It's called "Make America Great Again." We're going to make America great. We have a depleted military. It has to be helped — it has to be fixed. We have the greatest people on earth in our military. We don't take care of our veterans. We take care of illegal immigrants, people that come into the country illegally, better than we take care of our vets. That can't happen. Our policemen and women are disrespected. We need law and order. But we need justice, too. Our inner cities are a disaster. You get shot walking to the store. They have no education. They have no jobs. I will do more for African-Americans and Latinos than she can ever do in 10 lifetimes. All she's done is talk to the African-Americans and to the Latinos. But they get the vote, and then they come back, they say, "we'll see you in four years." We are going to make America strong again and we are going to make America great again, and it has to start now. We cannot take four more years of Barack Obama. And that's what you get when you get her.

Trump's closing sentence may not have been the best argument to win over undecided voters; as many pointed out on Twitter, President Obama's approval ratings are actually quite high. If Clinton really represents another four years of Obama, she may win the presidency—whether or not Trump deigns to accept it.

More like this
Bustle Daily Newsletter: December 5, 2022
By Hayley Schueneman
La Luz Del Mundo Leader Naasón Joaquín García Addressed His Followers From Prison
By Brad Witter
'Cheers' Stars Pay Tribute To Kirstie Alley After Her Death To Cancer At 71
By Jake Viswanath
60 Small, Inexpensive Gifts People Love
By Julie Peck and Claire Epting
Get Even More From Bustle — Sign Up For The Newsletter