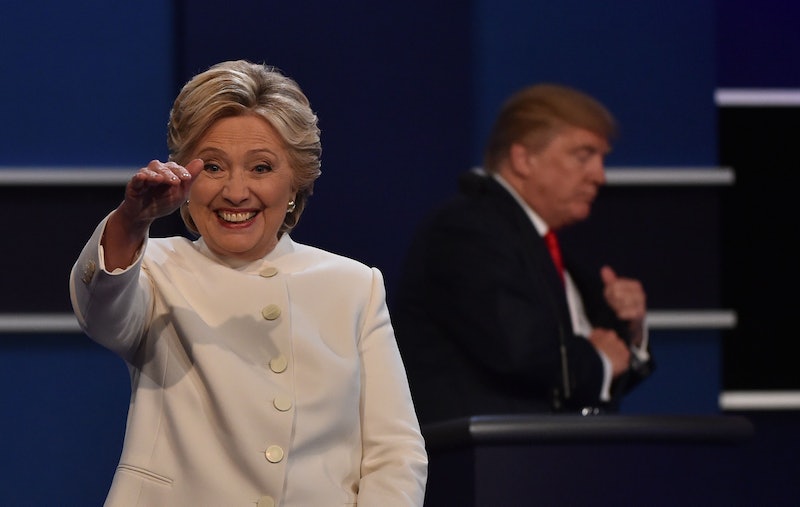 It's expected that candidates will take jabs at each other during presidential debates. But Donald Trump may have taken it too far during Wednesday's debate. At one point, Trump called Clinton a "nasty woman," leading the self-proclaimed "Nasty Women" of Twitter to respond in the best possible way.

Trump's statement came on the heels of him saying, "No one respects women more than me" in response to allegations of sexual assault against him. It seems strange that a man who respects women so much would call one "nasty." On top of that, Trump interrupted Clinton during her speaking time with his declaration of her "nastiness." Trump's interruption did not seem to signal respect for the woman he was debating.

But is any of this surprising from a man who, during a previous debate, called Clinton "the devil" and threatened to prosecute her? He even tweeted that if he wins he will instruct his Attorney General to get a special prosecutor to look into her private email server situation because he said "there's never been anything like [Clinton's] lies."

Trump's statement seems to have backfired though, with many coming out in support of Clinton, their fellow "Nasty Woman." The internet works fast, and a nasty woman domain name, nastywomengetshitdone.com, is already set to redirect to Clinton's website.

SNL's Stefon Has A Nasty Woman Club For You

A Nasty Woman Searches For Her Bad Hombre

Shimmy If You're A Nasty Woman

Nasty Women Are Getting Out the Vote

How To Win The Internet

Is This How To Respect Women?

A Theme Song For Nasty Women

Capitalism At Its Finest

Congrats, Donald. You Did It

The Nasty Girls of the internet have united and come together. There's no telling if and when Donald will respond to his inadvertent meme. In the meantime, here's what Hillary was probably taking notes on during the debate:

See you on election day, Donald.